Taken by JWST’s MIRI instrument, the haunting shot highlights the copious dust visible in the Pillars when viewed in mid-infrared light. 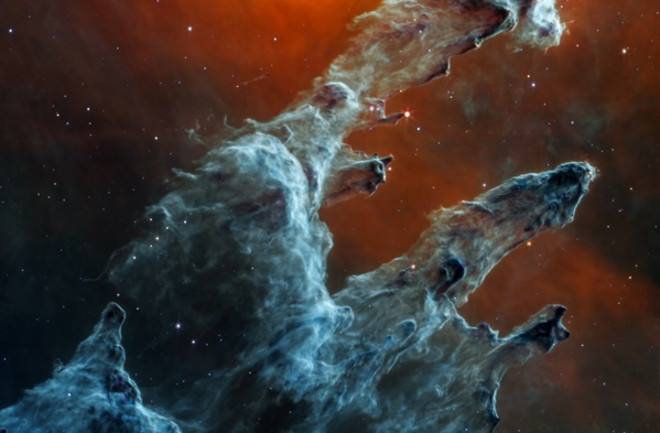 NASA’s James Webb Space Telescope (JWST) carried out yet another magic trick when it released its latest image of the Pillars of Creation, which makes thousands of stars seemingly vanish.

This stellar disappearing act was made possible thanks to JWST’s Mid-Infrared Instrument (MIRI), which is particularly sensitive to the many layers of gas and dust that call the Pillars of Creation home.

Although you can’t see many stars in this unique view of the Pillars, they are there. It’s just that stars typically don’t emit much light at mid-infrared wavelengths, instead primarily glowing in ultraviolet, visible, and near-infrared. For instance, JWST also captured another recent shot of the Pillars of Creation using its Near-Infrared Camera (NIRCam), which reveals myriad red stars forming within the Pillars.

Mid-infrared light may not reveal many stars, but it is fantastic at unmasking dense regions of gas and dust. The red regions toward the top of this image are areas where dust clouds are relatively diffuse. Meanwhile, the blue-gray pillars are very dense regions of dust, with the coolest and densest areas appearing the darkest.

https://youtu.be/gGPg0phl5mEBy imaging the Pillars of Creation with James Webb’s MIRI instrument, astronomers aim to figure out exactly how much dust is actually in this region, as well as what that dust is made of.

Although scientists have pretty good models of the Pillars of Creation already, by more precisely determining their structure and composition, astronomers will better understand how these dusty clouds incubate newborn stars until they are ready to burst forth into the cosmos.

This article was originally published on Astronomy.com.

6 Amazing Images From the James Webb Telescope in 2022

The Universe May Be More Unstable Than You Think