The hunt for a theory of quantum gravity suggests that spacetimes might emerge more easily than anyone imagined. 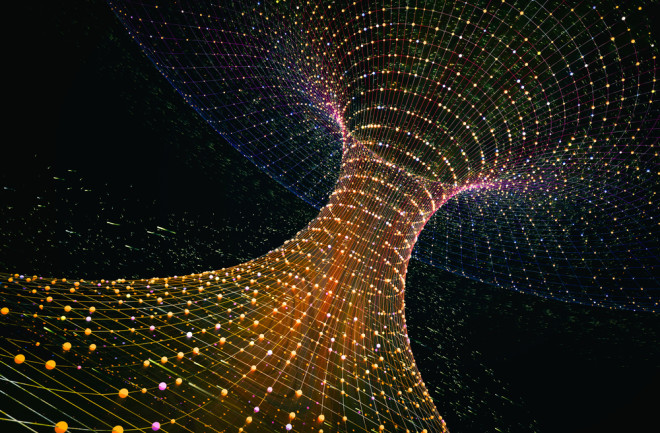 Perhaps the most intriguing endeavor in modern science is the ongoing work to unify the laws of physics at the very largest and smallest scales. That means finding a way to combine gravity with the laws of quantum mechanics to create a theory of quantum gravity.

One of the big ideas at the heart of this work is that the boundary of our cosmos contains all the information to describe what goes on within the universe. That’s weird because the boundary is only two dimensional while the universe is three-dimensional. Somehow, the extra dimension emerges from the properties of the other dimensions.

Physicists call this holographic duality because it is similar to the way that a third dimension appears in two dimensional holograms. The idea that we live in an emergent spacetime has captured the attention of numerous physicists, who would dearly like to explore this notion further.

Now they could have the chance, thanks to the work of Koji Hashimoto and colleagues at Kyoto University in Japan who have found a way to create emergent spacetimes in a simple tabletop experiment. Their key insight is to suggest that under certain conditions, spacetimes can emerge in ordinary materials, just as a third dimension emerges in holograms.

Hashimoto and co have sketched out the conditions in which this might work and calculated how physicists can spot these emergent spacetimes. If they’re correct, the team’s work lays the foundation for the first experimental detection of an emergent spacetime.

First some background. Holographic duality is the result of a conjecture that physicists came up with in the 1990s to reconcile two entirely different theories of the universe. The first is conformal field theory or CFT which describes particle physics on the smallest quantum scales. The second is anti-de Sitter Spaces which describes quantum gravity in terms of string theories and often requires many dimensions to do this. These become compactified in most real situations.

The conjecture is that conformal field theories and Anti-de Sitter Spaces are essentially the same thing, even though they have different numbers of dimensions. In this so-called AdS/CFT correspondence, conformal field theory exactly maps to anti-de Sitter Space and vice versa. This mapping shows how our extra dimension of space emerges from the lower dimensional description of the universe.

They then explored the conditions in which this might occur and how it could be visible to an external observer.

However, if this system allows the emergence of its own spacetime, it should interact with our own spacetime in a way that distorts its appearance in a predictable way, just like a hologram.

Hashimoto and co go on to calculate the properties of this distortion in a system made of thallium copper chloride, which has quantum properties that should allow the effect to occur.

They calculate that the thallium copper chloride ring should have a circumference of about 100 nanometers and be cooled to 0.1 Kelvin. And they predict what it will look like if its own spacetime emerges. “The imaging in the low temperature phase exhibits a distinct difference from the ordinary materials,” say the researchers.

That’s fascinating work that will have physicists the world over peering intently at tiny copper chloride rings for signs of emergent spacetimes. Crucially, this is an experiment that is possible in more or less any materials lab equipped with low temperature facilities. “These rough calculations show … a realistic possibility of the experimental search for the spacetime-emergent materials,” say Hashimoto and co.

That means we should soon find out if this phenomenon is easy to observe. If it is, the study of spacetime emergent materials will explode in the months ahead.

Of course, the observation of the emergence of spacetimes in the one-dimensional system that Hashimoto and co describe, does not necessarily mean that AdS/CFT correspondence must be correct. But it will surely excite the attention of physicists hoping that it is and wanting to extend the observations in a way that can confirm or contradict their theories of quantum gravity.

Be prepared for some exciting times ahead.

3 Ways You Use Quantum Physics Every Day