A focus on plant diversity and maintaining wild tracts of forest helped some Maya cities succeed for centuries. 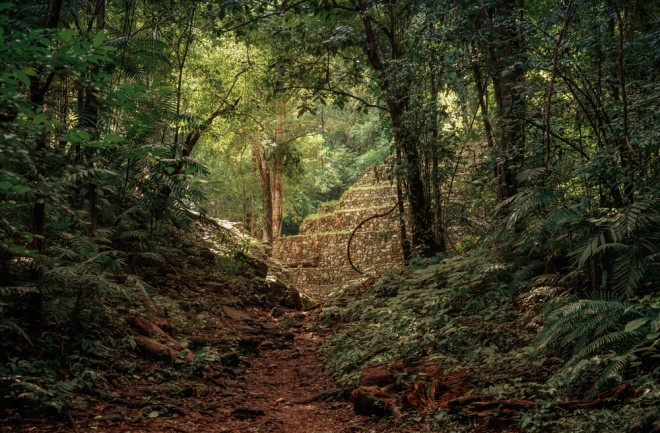 The ancient Maya controlled vast swaths of territory from southern Mexico down into Central America for thousands of years. Famous kingdoms like Tikal, Mayapan and others spread throughout Mesoamerica in time and space, each occupying its own territory and often warring with its neighbors in a complex system of territorial control.

Many of these states, like the city of Yaxnohcah, found in Mexico’s Yucatan Peninsula near the Guatemalan border, maintained power for centuries.

Yaxnohcah managed to maintain a city for so long because of the way they sustainably managed their water supply and agriculture.

“It shows the organization of the Maya — their engineering, their forethought and also their social organization,” says David Lentz, a paleoecologist at the University of Cincinnati who studies the agriculture of the ancient Maya and how they managed their forests.

In a study, published recently in Frontiers in Ecology and Evolution, Lentz and his colleagues combined three types of information. They examined 38 soil samples for seeds and other macrobotanical remains; analyzed pollen; and conducted environmental DNA analysis on the genetic material that they found preserved in soil samples around the ancient reservoir and elsewhere. These samples at Yaxnohcah dated from roughly 800 B.C. to A.D. 1200.

Environmental DNA (eDNA) analysis involves the examination of small quantities of soil, water or other sources where genetic material might be preserved. It’s often used in biology to detect the presence of cryptic or rare species in a pond or lake. Researchers can obtain it from bits of skin, leaves, feces or other organic materials that an organism left behind.

This eDNA can also look at pollen analysis, which determines the types of plants whose pollen is spread through the wind — most plants spread via pollinators. But eDNA hasn’t been used much in archaeological studies, if at all, Lentz says.

The techniques revealed that the trees growing around the reservoirs included types of figs, star apples, tropical plums, cashews, avocados and cacao — all plants that the ancient Maya used at that time. They also harvested palms for oil and other trees for fuel and construction. Additionally, the researchers also found evidence of seeds, pollen and other remains from wild plants that didn’t have a known use.

This indicates that the Maya were leaving parts of the forest around them intact, even close to the center of the city in Yaxnohcah. These areas would have been important sources of some wild plants they harvested for medicine and other non-timber products. They also helped to maintain biodiversity, compared to our single-crop orchards that we use to grow food in modern day.

“For us, forests are just nice places to look at where deer and elk can run. But for the Maya, the forests were really essential to their resource base,” Lentz says.

The researchers found that in the early days at Yaxnohcah, people used slash and burn agriculture. It’s a technique that burns forest and bush to then plant crops on the rich carbonized soil left behind. But this technique is only sustainable for relatively low populations with lots of land to use. Once the city began to grow, reservoirs and crop terraces began to appear.

“These terraces really helped them to improve their agriculture,” Lentz says, adding that it’s more productive than slash and burn techniques, and reduces soil erosion.

They also raised some fields in swampy areas and drained other areas. This was important, Lentz says, because the area around Yaxnohcah doesn’t receive much rain during parts of the year. Tropical forests help retain water during the rainy season. If too much vegetation is cleared, however, rainwater will quickly drain into the porous soil substrate, which is mostly calcium carbonate. At that point, the water would become unavailable to the Maya inhabitants. To help retain water, the Maya built an elaborate system of reservoirs that gave them drinking water during the dry season and helped them extend their growing seasons.

“Think of the biggest swimming pool you’ve ever seen,” Lentz says. “It’s amazing the effort they went to build these reservoirs.”

The researchers also took soil samples from a chultun found at the site. Chultuns are bottle-shaped underground chambers the Maya used for storage, or perhaps as water cisterns. Apparently, the occupants of this part of the Yaxnohcah community used the chultun as a burial site.

Obsidian artifacts and beautifully adorned ceramic pots accompanied the individual’s remains. They conducted an eDNA analysis on remains found in the chultun, and found tree bark remains that the Maya used for paper. While it’s unclear what this paper was used for, Lentz says that it could have been part of the large ceremonial head dresses used by the Maya, which were often made of paper. Another possibility was that the bark was part of a codex, or Maya book with writing on its pages. If this were true, Lentz says the dead could have been a scribe or someone else of importance. Most Maya were not literate, meaning this would have been a special tribute.

After discovering the same type of tree used to make paper products above the burial, Lentz says a generation afterwards could have deposited similar offerings.

Despite their focus on sustainability and long-term use of the forest around them, the Maya lacked the modern understanding of our climate and environment today. In Tikal, for example, it appears that cyanobacteria, or blue-green algae, contaminated their reservoirs. Lentz says that these reservoirs were close to the royal residences and the Maya rulers acted as intermediaries between the gods and society. Some might have seen their contaminated reservoirs as a sign that the gods were displeased with the rulers, possibly undermining their power.

In other areas like the Yaxnohcah, clearing forest land might have changed the water cycle, possibly affecting subsequent rainfall patterns. “They may have inadvertently brought about their own demise by contributing to the droughts of the ninth century,” Lentz says.

Nonetheless, the sustainable nature of their forest is still evident today, more than a millennium past the time that the political system collapsed. What looks like wild, unplanned forests, is instead a reflection of pattern that the Maya used over centuries in places like Yaxnohcah.

“Everything the Maya used is still there, and still there in abundance,” Lentz says.