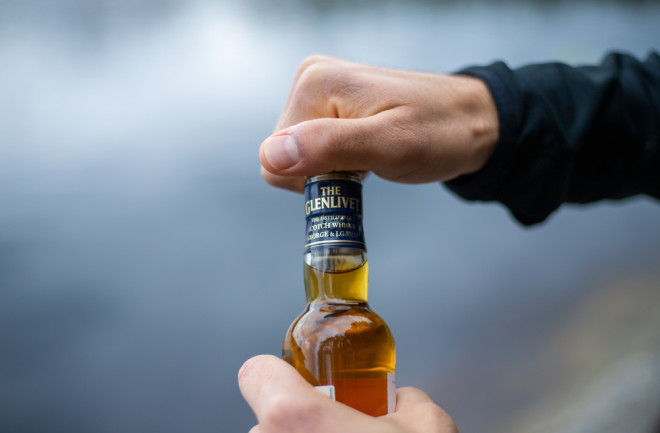 Coffee ring stains are the result of the unique way coffee evaporates. During this process, changes in the surface tension of the liquid set up a flow of fluid that pushes particles of coffee towards the edges of the puddle. These particles then form a ring-like stain when the liquid evaporates completely.

However, other fluids leave different patterns. A couple of years ago, a group of unusually dedicated engineers at Princeton University in New Jersey began “experimenting” with Glenlivet Whisky, a single malt Scotch distilled legally in Scotland since 1824 (and before that, illegally in the secluded Livet Valley). The team found that unlike coffee, Glenlivet leaves an almost entirely uniform stain when it evaporates.

Now Jinsun Kim and colleagues at the University of South Carolina have built on this discovery to create electronic components in which one layer is deposited entirely by the evaporation of Glenlivet whisky. They say their approach has the potential to make electronics manufacture more environmentally friendly and sustainable.

When the Princeton team published their discovery, they suggested Glenlivet’s unusual properties were the result of its concentrated mixture of ethanol and water and the unique composition of polymers and surfactants it contains. The complex interactions between these components as the fluid evaporates distributes the particles evenly, creating the uniform stain.

Kim and colleagues reasoned that this layer must be an insulator and so began experimenting to see if it could replace conventional insulating layers in an electronic component.

The electronic device in this case is the memristor—a resistor with memory and one of the four fundamental electronic elements, along with resistors, inductors and capacitors. Memristors are still rarely used in devices, having only been hypothesized in the 1970s.

Memristors are simple in structure. In this case, they consist of a two conducting layers, one each of cobalt and silver, separated by an insulating layer, in this case of Glenlivet Whisky deposit.

When a voltage is applied across the device, very little current flows initially because of the high resistance of the non-conducting whisky layer. However, the electric field causes silver atoms to migrate into the whisky layer and these eventually form a conducting filament.

At this point, current begins to flow as the resistance of the device drops. Them, as the voltage is lowered, the resistance initially remains low until the electric field forces the silver atoms back towards their original places, destroying the silver filament. This causes the resistance to drop again.

Cycling the voltage causes the sequence to repeat. The result is a hysteresis curve that, in each cycle, preserves a memory of the preceding current.

The key advance in this work is to show that it is straightforward to create a uniform non-conducting layer by covering the device in Glenlivet whisky and allowing it to evaporate. “The fabricated cells have demonstrated a reliable switching behavior and non-volatile information storage capability,” say Kim and co.

Indeed, the team speculate that the hysteresis curve is characteristic of the type of alcohol used to create the insulating layer. “We speculate that along with mass spectrometry and other novel techniques, the memristive effect and related hysteretic responses can provide tell-tale electronic signatures of alcoholic beverages,” they say.

They have even tried diluting the Glenlivet before allowing it to evaporate and have observed “a correlation between the threshold voltage and level of dilution.”

The resultant memristors have various potential applications such as in random number generators and neural networks.

Just what the makers of Glenlivet Whisky in Scotland make of this new use for their venerable product is yet to be recorded.