How Drones Found the Meteorite that Lit Up Australian Night Sky

Finding meteorites after they shoot across the night sky is notoriously difficult. Now astronomers have done it for the first time using drones and machine vision algorithms. 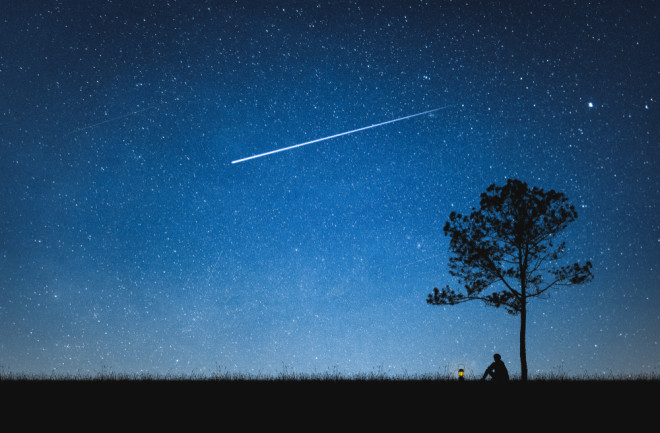 The Desert Fireball Network in Australia is a system of cameras that monitor the night sky looking for fireballs. The network ensures that several cameras view every region of the sky so that the trajectory of the incoming rock can be triangulated with reasonable accuracy.

When the Network detects a fireball, it is straightforward to work out the location of the meteorite landing site to within a few square kilometers. A team of astronomers is then dispatched to find it.

And therein lies the problem. A ground search over several square kilometers is time consuming and laborious. It usually consists of four to six people walking between five and ten meters apart who scour the area over a 4-day period until they find the culprit.

Even then, the success rate is low. ”[This approach] suffered from a relatively low success rate of ~20%, since an entire fall zone could rarely be covered in one trip,” say Seamus Anderson and colleagues at the Space Science and Technology Centre at Curtin University in Western Australia.

This team has accelerated the search using drones and powerful machine vision algorithms. Last year, they got the chance to test their approach for the first time by successfully recover a meteorite from the desert. “We report the first-time recovery of a fresh meteorite fall using a drone and a machine learning algorithm,” they say.

The meteorite in question entered the Earth’s atmosphere on the 1 April 2021 over the Nullarbor Plain in Western Australia. This is an almost treeless, desert-like area of scrubland that stretches over a vast part of the continent.

As luck would have it, only two cameras from the Desert Fireball Network observed the meteorite’s descent over 3 seconds. This led to a prediction of less certainty than usual of a landing area of just over 5 square kilometers. The team also estimated the meteorite’s final mass of between 150 and 700 grams.

“These fall conditions were promising enough to warrant a fieldtrip to survey the entire fall zone with a drone,” say Anderson and co.

They organized a 4-day mission to find the space rock using two drones to survey the potential landing site and a machine vision algorithm to analyze the images looking for potential objects of interest.

The team trained the algorithm using a database of images they had previously taken of meteorites found in this desert along with new images of meteorites they dropped on location and photographed using the drones.

“We used a DJI M300 drone with a Zenmuse P1 camera (44 MP) to survey the 5.1 km2 fall line at 1.8 mm/pixel with 20% overlap among images in each direction,” say the researchers. In these images, they expected the meteorite to have an apparent size of between 20 and 65 pixels.

“The first three days we spent onsite consisted of surveying with a drone, and processing data with our machine learning algorithm,” say Anderson and co. “On the fourth and final day we visited meteorite candidates with the drone and in person.”

And they found it! A 70g rock about the size of computer mouse. “Although we have not yet classified the meteorite, its fusion crust resembles that of other chondrites,” say Anderson and co.

That’s an interesting result that has the potential to revolutionize meteorite hunting in these kinds of locations. Of course, there are plenty of rough edges to smooth over.

For example, the team say it turns out their machine vision algorithm was not trained to find meteorites but instead identified anomalies of any kind. “During the course of devising this strategy, we have encountered false positives such as tin cans, bottles, snakes, kangaroos, and piles of bones from multiple animals,” they say.

They also gained some useful insights. For example, they found the meteorite just 50 meters from the predicted ideal fall line, even though this had considerable uncertainty. “With this in mind, we may in the future prioritize searching the area immediately around the ideal fall line,” they say.

And they also had some luck. The meteorite’s significantly lower mass than predicted could have led to it landing some way outside the predicted site, were it not for a helpful following wind.

All this could be of significant use to fireball networks, which now monitor a third of Australian skies and an increasingly large area of the sky across the world. However, the training data will need to be gathered in a way that captures the characteristics of the particular landing area, which vary dramatically around the world.

Interestingly, by reconstructing the trajectory of the fireball, astronomers can find the landing site but they can also run the trajectory backwards to work out what part of the solar system the meteor must have come from. This allows astronomers to better understand the origin of the meteorite and the role it may have played in the formation of the Solar System.

So there is much more science to come from this kind of work.