With its latest run complete, LIGO heralds a new phase in the exploration of extreme physics. 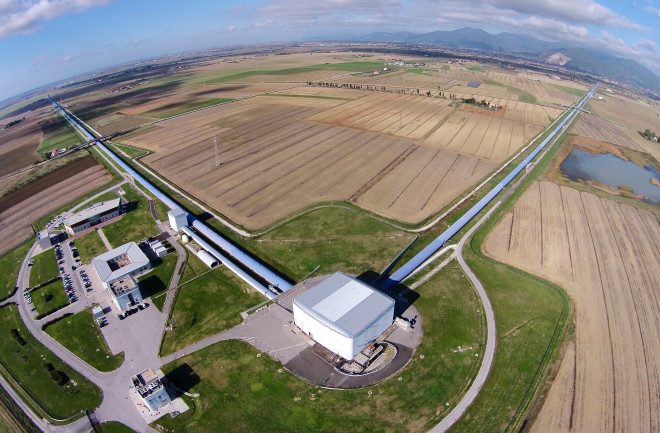 In 2017, LIGO, in collaboration with the European Virgo interferometer, (above), observed a neutron star merger. (Credit: The Virgo Collaboration/CCO 1.0)

Gravitational-wave astronomy is growing up. These ripples in the fabric of space-time are created by accelerating masses, which then travel outward from their origin at the speed of light. While anything with mass can produce a gravitational wave (GW), only the biggest events are currently detectable: either from two black holes colliding, or two neutron stars smashing into each other, or a combination of the two.

The first GWs were detected in 2015 by the Laser Interferometer Gravitational-wave Observatory (LIGO), when two black holes about 1.3 billion light-years away slammed into each other. LIGO consists of two interferometers — one in Louisiana, one in Washington state — which are L-shaped vacuum tunnels about 2.5 miles long on each side. A laser is shot from the crux of the L to mirrors at the end of each side, and if one of those laser beams arrives slightly late, the tardy beam is recorded by the detector. The detectors are sensitive enough to pick up nearby noises on Earth as well, such as passing trucks and falling trees. These events can mask

The actual detector that spotted the first gravitational wave is now in the Nobel Prize Museum in Stockholm, Sweden, as the 2017 Nobel Prize in physics was awarded for this discovery. But LIGO didn’t stop there: A few months later, in collaboration with the newly completed Virgo interferometer in Italy, LIGO detected another gravitational wave event — this time produced by colliding neutron stars. The discovery also corresponded with a short gamma-ray burst and subsequent discovery of the merger site with optical telescopes. Within days of that momentous discovery, however, LIGO went offline for scheduled upgrades.

The detectors turned on again on April 1, 2019, for a new observing run, dubbed O3, which was highly anticipated by the astronomical community. New upgrades meant LIGO could spot GWs even further in space during its year-long run, and working in conjunction with Virgo meant even greater precision on where in space the detected merger happened. What would LIGO discover this time?

Data from the first half of O3 has been released, and it is clear that with O3, LIGO has entered a new phase. “We have moved from the discovery phase of GW events and are transitioning into routine,” explains Samaya Nissanke, an astrophysicist at the University of Amsterdam and member of the LIGO collaboration. The observing runs before O3 detected just 11 GW events; the O3 run detected several dozen. Almost overnight, the discovery of gigantic black holes smashing into each other millions of light-years away from us was rendered nearly routine.

What’s more, for each new detection, LIGO sent out alerts in real time, as observatories routinely do for astronomical events that require rapid follow-up. These alerts were distributed automatically when the Virgo detector and both the Louisiana and Washington LIGO detectors saw what looked like a GW signal at the same time. The alert also included a sky map of where the signal might have come from, called a localization. Once issued, these messages were distributed through automatic alerts to astronomers, apps, and even the LIGO Twitter feed. Although the alerts were peppered at first with events subsequently attributed to local interference on Earth — “It was a bit of a rocky start,” admits Nissanke — once the kinks were smoothed out, astronomers could comb the sky almost instantaneously for any faint glow detected from a GW merger. Plans are in the works to apply automatic algorithms and machine-learning techniques to make the alerts more accurate in the future.

As the verified O3 detections progressed, however, it was clear that LIGO was growing its sample of black holes at a fast rate. “We’ve seen a doubling in our number of black hole detections, and with that increase we’re getting a much better idea of the population out there,” explains Lionel London, an astrophysicist at MIT who specializes in modeling the GW signatures of black holes in LIGO. One notable example, called GW190814 (because it was detected on Aug. 14, 2019), was exciting because it was either the heaviest neutron star or the lightest black hole ever discovered.

This graphic shows the masses of all of LIGO’s announced gravitational wave detections, as well as black holes and neutron stars previously obtained through electromagnetic observations. (Credit: LIGO-Virgo-Kagra/Aaron Geller/Northwestern)

Scientific discoveries have also come from the real-time detection alerts. Most notable has been the possible discovery of light from two colliding black holes reported by the Zwicky Transient Facility (ZTF) at Caltech, the first time such a detection has been claimed. Black holes are famously so dense that light cannot escape them, and the merger of two black holes is not expected to give off any light in normal circumstances either. In this case, however, a flash of light observed by ZTF is argued by the team to correspond with a GW event on May 21, 2019, when two black holes merged. The angular momentum from the merger itself, researchers argue, would have led to an interaction with surrounding gas. It is this interaction that could have, in turn, given off the sudden flash they observed.

Beyond individual events, however, a catalog of black hole detections is invaluable for testing our understanding of physics itself. Each part of a GW detection is made of several components, including the inspiral of the two objects, the collision itself and the reverberating aftershock of the merger. The extreme physics during these moments provide a new hotbed for testing theories relating to gravity, ranging from general relativity to mysterious dark energy driving the expansion of the universe. “In terms of the theoretical interpretation, these are really early days,” explains London. “Some of the tests are really rudimentary.” Once the sample of events grows larger and the signatures are better understood, however, scientists can use statistics to probe physics in entirely new ways.

Unfortunately, the O3 run was cut short in March 2020 by the coronavirus pandemic. GW scientists are confident, however, that the next run, O4, will be even more exciting when it begins in December 2022. Not only will they peer further into space than before, but in 2020, a new GW detector, the Kamioka Gravitational Wave Detector (KAGRA), came online in Japan. Working in tandem with the LIGO and Virgo instruments, KAGRA will allow for even more precise estimates for where the GWs originate from. Looking even further ahead, LIGO-India is currently in the works and slated to begin observations in 2026. When it does, the ability to pinpoint where a gravitational wave came from in the sky will be significantly better than where they are now. This will allow astronomers to identify the locations of cosmic collisions better than ever before.

“We are opening the zoo of astrophysically formed black holes,” observes Nissanke, “and it’s exciting to see what’s out there.”