From stars made of dark matter to stars literally living inside their partners, these stellar systems are theoretically possible. 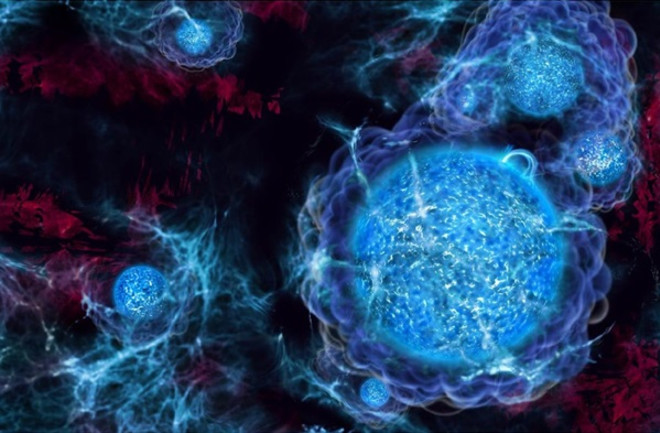 With help from dark matter annihilation, some of the universe’s earliest stars were able to grow much larger than they would otherwise. (Credit: Astronomy/Roen Kelly after NSF)

Every day, we bathe in the glow of a giant, burning ball of gas that sustains life on our planet. At night, we look up at a sea of stars, which come in a staggering variety of sizes, colors and ages. These objects all shine thanks to the same nuclear fusion that powers our own Sun. But they might not be all the universe has to offer.

Some astronomers think there are so-called "exotic stars" out there, composed of particles other than the typical electrons, protons and neutrons that make up our Sun and all of its cousins. And while these exotic stars are still hypothetical, scientists are starting to find evidence that some of them might actually exist. Here, we’ve compiled a list of four of the weirdest and most exotic stars that might be floating in space.

Dark matter stars would have existed before the first normal stars were born. And if they are real, they might even still exist today.

Contrary to what you might imagine based on the name of these theoretical stars, they would mostly be made of normal matter. Namely, hydrogen and helium, like our own Sun. However, these dark stars would also have significant amounts of something called “neutralino dark matter.”

In the same way that atoms make up normal matter, neutralinos are a type of hypothetical particle that some physicists think may make up dark matter. And some supersymmetry theories suggest neutralinos could even be WIMPs, or Weakly Interacting Massive Particles, which are a common dark matter candidate.

If theories are correct, neutralino particles serve as their own antimatter. That means that if they ever touch each other, they'll completely annihilate, generating tremendous amounts of energy and heat. The raw power of neutralino annihilation would allow dark matter stars to continue blazing for billions of years, all without ever needing to collapse to kickstart nuclear fusion, which is a prerequisite for normal stars.

As a result, dark stars could be huge and puffy giants, growing to tens, or maybe even thousands of astronomical units (AU; the average Earth-Sun distance) in diameter. Yet, despite their size, that lack of fusion and relatively low temperatures would likely make these stars truly dark, possibly invisible to the human eye.

However, before you get too excited about stars made of dark matter, you should know that experiments in particle colliders haven’t yet been able to turn up any convincing evidence of neutralinos. And until that happens — or until a dark star pops into view — these ghostly stars will remain hypothetical.

In 2012, particle collisions at Europe's Large Hadron Collider uncovered the long-sought Higgs boson, which is thought to be directly correlated with the strength of gravity. | ThomasMcCauley and Lucas Taylor/CMS Collection/CERN

But some scientists think that dark matter could have its own boson. These dark bosons could be dark matter itself, or they could simply cause its interactions with regular matter. Dark matter bosons also might be able to coalesce into dark matter stars, though they’d behave rather strangely.

Ordinary stars like our Sun are made of fermions, such as protons, electrons and neutrons. But boson stars would be made of bosons, which follow different rules than we're used to in our day-to-day experiences.

For example, the fermions in normal stars behave like people. Two people can’t occupy the same physical space at the same time, and they have to take turns standing in a given spot. But bosons act more like waves in water. And when waves come together, they don't push each other out of the way. Instead, they add together and make a bigger wave. In physics, this is called a Bose-Einstein condensate. A dark boson star would be like a giant, dense Bose-Einstein condensate in outer space. And it might resemble another extremely compact object — a black hole.

In fact, a recent study published in the journal Physical Review Letters suggested that scientists may have already witnessed two boson stars collide. In May 2019, the Laser Interferometer Gravitational-Wave Observatory caught the ripples in space-time caused by the collision of two weirdly large black holes. The pair were some 66 and 85 times the mass of our Sun, respectively, which is larger than current theories suggest should be possible through the death of massive stars.

It’s possible that each of these black holes were the products of previous, smaller black hole mergers. But after the team ran that option through their models, they realized that such an outcome would be indistinguishable from the collision of two dark boson stars.

If it turns out the universe is replete with these hypothetical dark boson stars, it would finally explain the enduring mystery of why scientists haven't been able to track down dark matter.

Neutron stars are truly bizarre objects that are common across our universe. These ultra-dense stellar corpses are created when large stars explode. Just a teaspoonful of neutron star material could weigh as much as a mountain on Earth.

But there’s another type of hypothetical star that could make even these extreme objects look tame. They’re called quark stars. Quark stars are theoretical objects that sit somewhere between the density of a neutron star and a black hole. They're made of quarks, an elementary particle that serves as a building block for matter by coming together to form the protons and neutrons in atomic nuclei.

Nearly 20 years ago, NASA announced that observations made with the Hubble and Chandra space telescopes might have captured a pair of these quark stars. The first potential quark star, named RX J1856.5−3754, sits just 400 light-years away in the constellation Corona Australis. Astronomers noted that the star was far hotter than expected, with a temperature roughly 1.26 million degrees Fahrenheit (700,000 degrees Celsius) and a diameter of less than 5 miles (8 kilometers). That's too small to fit with astronomers’ ideas about neutron stars, which pushed some to suggest it could be a quark star. Eventually, scientists realized that the star is farther away, and therefore cooler and bigger than originally thought, ruling it out as a quark star.

However, the other quark star candidate, dubbed 3C 58, has been neither confirmed nor ruled out. The star’s strange behavior — like dramatic temperature swings — also doesn’t conform with astronomers' ideas about standard neutron stars. Ultimately, more research is required to learn whether quark stars really exist, as well as whether we've already found one.

A Thorne-Żytkow object is a theoretical type of hybrid star created when a dense neutron star is swallowed by a puffy red supergiant star, as seen in this artist's concept. (Credit: Astronomy magazine)

They are thought to form when red giant or red supergiant star collides with a neutron star. Though it would be incredibly rare, such a collision could potentially happen when two wandering stars pass too close to each other; however, it would be much more likely to occur in a close binary system. If one of the binary stars in such a system were to go supernova, it would leave behind a neutron star. That massive stellar explosion might also give the remnant neutron star a “kick” in the direction of its giant neighbor, forcing the two to collide and merge.

Physicists Kip Thorne and Anna Żytkow first dreamed up these hybrid stars back in 1977, hence their name. But Thorne-Żytkow objects were really thrown back into the limelight in 2014, after astronomers suggested they’d finally found one in a star called HV 2112. However, in the years since then, that discovery has remained controversial.

So, although just as fascinating to ponder as all the other wild stars on this list, Thorne-Żytkow objects likewise remain purely hypothetical. But then again, astronomy textbooks are now strewn with descriptions of real crazy cosmic objects that were long-considered science fiction. Who's to say what other bizarre objects we'll uncover in the years to come?

Most Distant Dark Matter Ever Found Dates Back 12 Billion Years