A heavy particle's magnetic moment goes beyond the Standard Model. 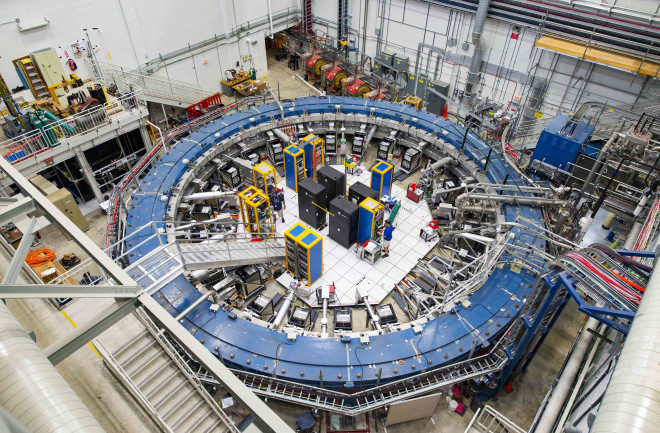 There’s no such thing as being alone in the cosmos. Physicists have known for decades that particles and antiparticles pop in and out of existence all the time, some of which we know about and many of which likely remain undiscovered. Physicists search for signs of new particles beyond the Standard Model — the theory that describes how elementary particles and fundamental forces interact — to push physics into new realms.

In April, an international collaboration of more than 200 scientists, based at the Fermilab National Accelerator Laboratory in Batavia, Illinois, reported findings that may open a door to physics that transcends the Standard Model. The experiment centered on muons, which are positively or negatively charged short-lived subatomic particles with about 200 times as much mass as electrons. Like electrons, muons generate their own small magnetic fields. Scientists can measure the particle’s “magnetic moment,” which describes the strength and direction of that field.

Crack in the Wall

Starting in 2018, scientists began beaming muons around Fermilab’s donut-shaped magnet, which is 50 feet in diameter, at close to the speed of light. (Each muon circled the donut a few hundred times on average before decaying.) Based on calculations of the magnetic moment from that first run, the scientists observed that the muons wobbled — or precessed — significantly more than theory predicts. If the Standard Model is correct, then the wobble of muons’ magnetic moments in the experiments should have exactly matched what theoretical calculations predicted.

But they didn’t, the scientists in the Muon g - 2 Collaboration found. (The letter g stands for “g-factor,” and it describes how the spinning muon magnet would react to an external magnetic field.) If muons behaved as predicted, then g would equal 2, and g minus 2 would equal 0. But the Fermilab experiments showed that g was a little more than 10 millionths greater than 2, enough that many physicists see that discrepancy as a crack in the wall of the Standard Model.

The experiment itself likely isn’t the culprit. Physicists have been measuring the magnetic moment of muons since early experiments at CERN, in Switzerland, in the 1950s. But in 2001, experiments from an ultra-precise measurement at Brookhaven National Laboratory, in Upton, New York, revealed the discrepancy with theoretical calculations. The new experiment at Fermilab, using the same setup as Brookhaven but with updated detectors and two decades of insights into muons, verified Brookhaven’s results to a new and unprecedented precision.

“The fact that we were able to get essentially the same number really helped to shore up the evidence that this is not an experimental anomaly or statistical fluke,” says Polly.

A flood of recent papers, many posted to the arXiv preprint server, describe ideas for how to probe unknown particles that might be knocking the muons around. Some theorists have turned to models of supersymmetry, which posits the existence of a whole zoo of undiscovered particles, to suggest that hypothetical particles with names like charginos and sleptons play some role. Many ideas focus on tying the g - 2 discrepancy to the influence of dark matter, the mysterious, undetectable stuff that could make up one-quarter of the matter in the universe.

“They want to stitch all these pieces together into a fundamental picture of the universe,” says Polly.

There’s no question that the Standard Model is incomplete and somewhat patched together, he says, but it’s also wildly successful in its description of nature. However, not everyone agrees that the Fermilab results point to new physics. While the experimental results are clear — and will likely become more precise in future runs — theorists disagree about what they actually mean.

Using supercomputers, a group of 14 theorists known collectively as the Budapest-Marseille-Wuppertal collaboration, or BMW, ran an advanced calculation of the muon’s magnetic moment. On the same day that Polly and his colleagues unveiled their results, the BMW theorists published a paper in Nature reporting that their calculations place Fermilab’s results much closer to the Standard Model, with no contribution from undiscovered hypothetical particles.

As scientists wrangle to match theory to experimental findings, the Muon g - 2 Collaboration will continue to churn through data. (A lot of data: about 1 petabyte per month, enough to fill roughly 4,000 smart phones.) The findings released in April, says Polly, represented just 6 percent of the total data that the experiment will collect.

Most Distant Dark Matter Ever Found Dates Back 12 Billion Years