Explained: How Artemis 1 Will Kickstart Humanity’s Return to the Moon

This uncrewed mission will test critical technology for the first human expeditions to the Moon in five decades. 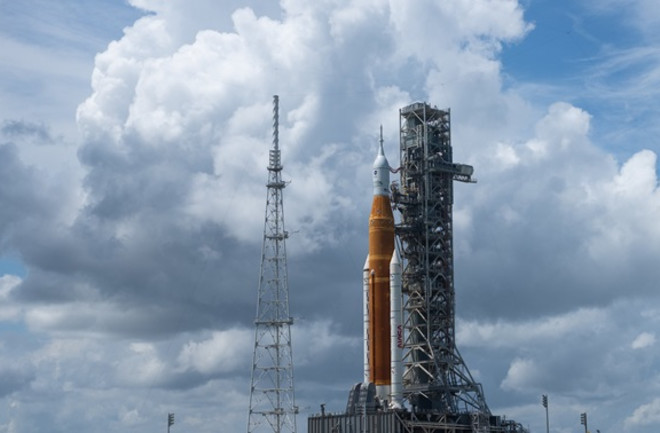 So, We’re Going Back to the Moon?

We are! And, if NASA’s hopes and plans are met, not just “back,” but this time to stay.

The uncrewed Artemis 1 mission — delayed multiple times but set to launch as soon as Saturday — is the first in a series of planned missions that mark NASA’s return to the Moon. As soon as two years from now, Artemis 2 will take a crew to lunar orbit. Artemis 3 is the planned mission that will return humans to the lunar surface, landing the first woman and the first person of color on the Moon. That mission is scheduled for 2025, though many observers wonder if such an ambitious schedule can be met.

Dates and plans are likely subject to change, but the Artemis program (named for Apollo’s twin sister) is moving forward. It is the first effort to send humans to deep space since the end of Apollo in 1972, 50 years ago.

What Rocket is Artemis 1 Using?

The Artemis 1 mission will be the first launch of NASA’s “mega Moon rocket,” the Space Launch System (SLS), which, if successful, would be the most powerful rocket ever. Based on a mix of new technology and heritage propulsion systems from the space shuttle era, the SLS is years behind schedule and overbudget. But it has its proponents in Congress, and, as some point out, like space-policy expert Casey Dreier of The Planetary Society, SLS was never meant to compete with the recent rise of reusable spaceships. That said, some think SLS won’t outlive these newer vehicles. For now, though, it is our Moon ride.

Each Artemis mission, at least early on, will cost about $4 billion. Critics point to the cost and delays. Advocates point to exciting new science, the possibility that humans can live on another world long-term and do so sustainably, as well as the likely inspiration that such a program provides humanity and industry. Oft-cited: The Apollo guidance computer was the first major miniaturization of computers — and all you have to do is pull out your smartphone to see where that led.

The engines used in the core stage of the Space Launch System are repurposed main engines from the space shuttle. (Credit: NASA)

The first launch window opened for two hours on Monday, Aug. 29, at 8:33 A.M. EDT. Launch windows are set because flight controllers must account for the motion of the Earth, the Moon and the rocket itself.

But the rocket didn’t launch. NASA managers briefed the press after an exhausting several hours, pointing to several glitches, including a lightning delay that set back fuel loading, a tetchy hydrogen leak, and a valve problem. The main showstopper was one of the core stage’s main engines not cooling to the temperature needed for a launch. Still, even if all that had been resolved, there were weather complications during the launch window that would have stalled the attempt.

If SLS doesn’t launch on Saturday, another window occurs Monday, Sep. 5, at about 5 P.M. EDT. After that, more windows open later this fall.

After lift-off, the Orion capsule and its Service Module, built by the European Space Agency (ESA), will go into Earth orbit and the solar panels will deploy. Then, about 90 minutes into the mission, the Interim Cryogenic Propulsion Stage (ICPS) will light up for about 20 minutes. That’s trans-lunar injection (TLI), the rocket burn that will propel Orion out of Earth orbit and on its way to the Moon. After TLI, the ICPS will be jettisoned, and Artemis 1 will be on its way for a four-day journey to the Moon. Along the way, it will launch 10 CubeSats — small, inexpensive satellites — with research targets ranging from studying lunar water ice to measuring deep-space radiation.

For Artemis 1's "crew," NASA has supplied one male mannequin while ESA has contributed two partial female mannequins. ESA's mannequins are designed to study the impacts of radiation, as breast cancer and ovarian cancer have a greater chance of developing due to radiation exposure. (Credit: NASA/Lockheed Martin/DLR)

NASA is stressing the craft beyond normal parameters on this test flight, but don’t worry, no one is aboard except a set of full and partial mannequins equipped with sensors to monitor the impact of radiation on future human astronauts. The mannequins are named Commander Moonikin Campos, Helga, and Zohar. The Commander’s last name is a gesture to honor engineer Arturo Campos, who played a pivotal role in getting Apollo 13 home from its nearly fatal lunar mission.

As Orion approaches the Moon on its sixth day in space, it will make a flyby of the Moon, swooping to within 60 miles (100 kilometers) of the lunar surface. As it does so, it will fire its rockets — but not to slow down. Instead, it will boost its momentum to carry it further from the Moon toward its eventual lunar orbit.

That’s because unlike Apollo missions, which kept to a tight, near-circular orbit around the Moon, Artemis 1 will use a much wider orbit called a distant retrograde orbit (DRO). (“Retrograde” means the craft will be orbiting in the opposite direction that the Moon orbits the Earth.)

On the mission’s tenth day, Artemis will fire its engines again — this time to slow down and finally enter DRO, where it will stay for 16 days. While in this orbit, Orion will venture farther into space than any human-rated craft in history. The most distant point of its orbit will be 40,000 miles (64,000 km) beyond the Moon’s far side, breaking the record held by Apollo 13.

Eventually, NASA and its international partners will position a small space station called the Gateway in a looping orbit called a near-rectilinear halo orbit. That station will serve as an outpost where Artemis crews will transfer from the Orion capsule to the landing craft, a modified SpaceX Starship. For Artemis 3, however, Orion will meet up in lunar orbit directly with a lander.

After Artemis 1 completes one-and-a-half orbits in DRO, it’s back to Earth for a splashdown in the Pacific on Oct. 11 (assuming the mission runs to schedule with a launch on Saturday). That’s a critical part of the mission — to test the heat shield before humans fly on Artemis 2. Orion will come in faster than any crewed spacecraft before, at up to 25,000 mph (40,000 km/h) and some 5,000 degrees Fahrenheit (2,800 degrees Celsius). The heat shield has to work.

Artemis 1 will use the Moon's gravity to slingshot it into a distant retrograde orbit (DRO), a highly stable orbit. NASA originally studied DRO for the Asteroid Redirect Mission, a proposed mission that would capture an asteroid and place it into DRO for easy access to study. (Credit: NASA)

But Why Are We Going Back to the Moon Anyway? We’ve Been There, Right?

Our understanding of the Moon today is vastly different from that during the age of Apollo. Once thought to be bone-dry, scientists have found that the Moon has vast deposits of water ice, especially at the south pole, near which Artemis 3 is set to land. There, water ice has accumulated for billions of years from a variety of sources, kept stable in permanently shadowed regions (PSRs). Yet on the rim of some craters in the polar region, the sun shines nearly constantly. It’s the perfect combination of power for solar panels and water for drinking, making oxygen and making rocket fuel. In 2024, NASA will send a rover called VIPER (Volatiles Investigating Polar Exploration Rover) to that region to scout out what will surely be a dramatic landscape.

Finding water on the Moon has the potential to be a game-changer. NASA’s current mantra for crewed exploration is “Moon to Mars.” By utilizing water ice on the Moon, NASA hopes to learn how to “live off the land” in an environment with a lot of radiation, vast differences in temperature, nasty dust, and more — training ground for living on Mars.

Some are advocating astronauts settle down in lunar lava pits, shielded from many of those hazards. It would be high-tech return to our species’ cave-dwelling roots as we plan forays to the Red Planet, perhaps fueled by lunar ice turned into rocket fuel.

But NASA’s goals aren’t just settlement — they’re also scientific. The Moon’s water harbors clues to the ancient past of our solar system and the surface offers places for special kinds of work. The far side is perfect for radio astronomy. Shielded from the Earth, it’s very, very quiet there.

NASA is not alone in this Moon rush. Private companies are sending robotic missions. And Russia and China are collaborating on plans for a Moon base and space station. China is pushing ahead, having demonstrated real chops at developing a serious program of space exploration. It’s not quite the Cold War, but it’s gotten Washington’s attention.

How Are we Doing This?

With rockets, of course!

But seriously, NASA is partnering with other countries and agencies, most notably ESA, whose service module for Orion serves as the spacecraft’s power and support vehicle. NASA is touting its global partnerships, and multiple countries have signed the Artemis Accords, pledging cooperation and careful stewardship of the Moon and space environment.

Not everyone thinks it’s enough to prevent overexploitation, unnecessary scarring of an ancient world or even conflict and hostilities with other players. A lot of policy and legal reflection is underway.

Advocates believe Artemis can be our first baby steps — if not giant leaps — in becoming a multi-planetary species while also benefiting our home world through innovation and perhaps even showing us more cooperative ways of living together.

That’s the easiest question of all. Your best bet is NASA TV, which will begin coverage a couple of hours ahead of the first launch window. You can find it on NASA’s website and on YouTube. NASA will also cover Orion’s first outbound trajectory burn later that night; a full schedule of the planned programming is on NASA’s site.