A new study supports the theory that volcanoes — not asteroids — trigger the most extreme mass extinction events. 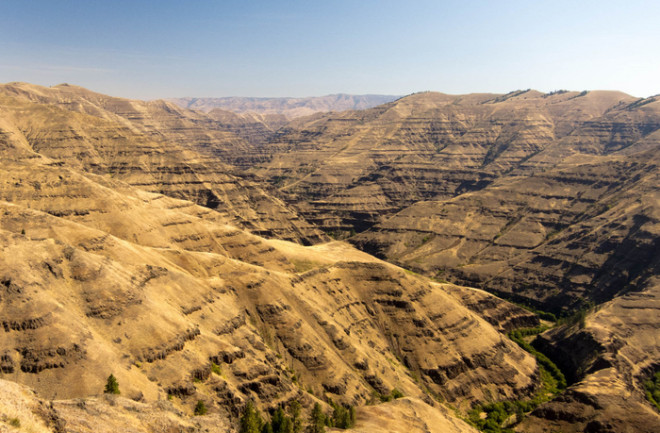 What caused the death of the dinosaurs approximately 66 million years ago? You may think that you know, but a new study in the Proceedings of the National Academy of Sciences now states that volcanic activity — not asteroid impacts — probably drove their disappearance, as well as most other mass extinctions in our planet’s past.

Species extinctions are a normal part of the process of evolution, but they sometimes become so numerous and so sudden that they transform into what scientists call a "mass extinction event." These events take place whenever approximately 75 percent of the world’s existing species disappear within two to three million years or less. Thus far, there have already been five such extinctions. The death of the dinosaurs was with the most famous and most recent at the boundary between the Cretaceous and the Tertiary periods.

Each of the five extinctions, and especially the dinosaur die-off, has inspired countless scientific explanations. One of the most accepted is the theory that the collisions of comets and asteroids into the surface of the Earth spewed enormous amounts of ash and dust into the atmosphere. They blocked the sun and submerged the planet into several periods of extinction-causing cold. And ever since the 1990s, this theory has only gained popularity due to the discovery that the Chicxulub impact crater in the Yucatán Peninsula took shape around the same time as the dinosaur disappearance.

"All other theories that attempted to explain what killed the dinosaurs, including volcanism, got steamrolled when the Chicxulub impact crater was discovered," says Brenhin Keller, a study author and a geology and geochemistry professor at Dartmouth, in a press release. But, despite the popularity of the theory, its evidence remains elusive for many of the earlier extinctions.

Keller and a team of researchers compared the asteroid theory with a similar theory that states that volcanic activity actually produced the cold-inducing covers of atmospheric ash, resulting in the five extinction events. Ultimately, their comparison found that four of the five events corresponded with enormous volcanic explosions that flooded large swaths of the planet in lava in only a million years’ time or less.

These findings offer the strongest evidence of a causal connection between eruptions and extinctions, and suggest that volcanic activity constitutes the biggest cause of past die-offs, including the dinosaur decline.

The team concentrated on enormous volcanic eruptions that formed so-called "flood basalts," or large areas of land covered by basalt lava. Identified today by their stair-step structures of igneous rock, the researchers focused on flood basalts with more than 100,000 cubic kilometers of lava. The majority involved in their investigation contained around a million times more lava than that.

After identifying these enormous eruptions, the team then used supercomputers to analyze their timing with that of past extinctions, including the five mass extinction events. To verify that any correspondence between the timing of the two represented causal connections rather than coincidences, the computers then tested whether the volcanic activities would coordinate with 100 million randomly generated patterns at a similar level. The results revealed that the eruptions and the extinctions matched much more than could be explained by mere chance.

"The large step-like areas of igneous rock from these big volcanic eruptions seem to line up in time with mass extinctions and other significant climatic and environmental events," says Theodore Green, another study author and a graduate student at Princeton, in a press release.

"While it is difficult to determine if a particular volcanic outburst caused one particular mass extinction, our results make it hard to ignore the role of volcanism in extinction," Keller concludes in a press release.

This, the researchers say, suggests that asteroid contributed little to past extinction events aside from the one that wiped out the dinosaurs. And even then, because volcanoes were also highly active around 66 million years ago, spewing huge amounts of ash into the atmosphere all on their own, the dinosaur disappearance would’ve probably happened even without any asteroid involvement.

"Our results indicate that, in all likelihood, there would have been a mass extinction at the Cretaceous-Tertiary boundary of some significant magnitude, regardless of whether there was an impact or not," concludes Paul Renne, another author and a geology and geochronology professor at the University of California, Berkeley, in a press release. That said, "the fact that there was an impact undoubtedly made things worse."