An ultra-powerful scan of the pyramid’s interior could finally reveal the contents of two mysterious voids inside the last of the Seven Wonders of the Ancient World. 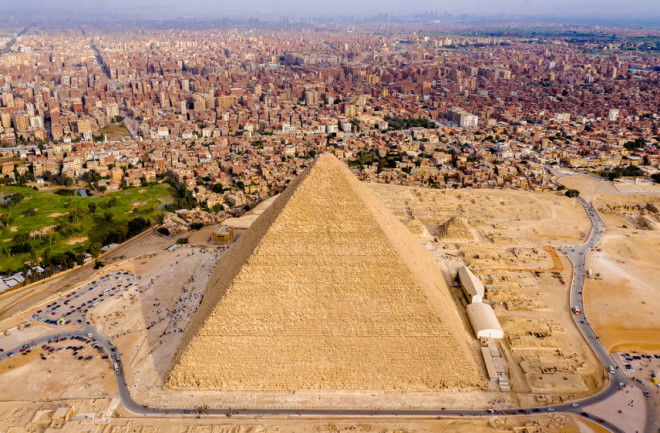 Egypt is home to over 118 pyramids that have continued to entice travelers, mathematicians and archaeologists seeking to understand these human-made structures. Constructed more than 4,500 years ago, the Great Pyramid of Giza is the last-standing ancient wonder of the world, and a symbol of Egypt’s rich culture. The structure is part of a group of three pyramids — Khufu, Khafre and Menkaure –– with each one serving as a royal tomb named after three pharaohs. While all three Pyramids of Giza continue to marvel the world, Khufu, more commonly known as the Great Pyramid, has received the most attention due to its massive size, built at 481 feet tall.

Researchers have spent decades attempting to uncover the inner mysteries of the Great Pyramid to understand its engineering and purpose. In 2015, the ScanPyramids project brought together experts from France, Japan and Egypt to find several non-invasive techniques to reveal what lies inside the Great Pyramid. In 2017, scientists were finally able to peek inside using particle physics. Their findings revealed a hidden world full of secret chambers and rooms that were unexpected. Perhaps the biggest discovery was a massive void nearly 100-feet-long that lay just above the pyramid's grand gallery. A smaller void was also found just beyond the north face of the structure. But what lies inside these two voids? Scientists have yet to unearth this mystery.

Now, a team of researchers from the Fermi National Accelerator Laboratory promises to find out what lies inside the two mysterious voids inside Khufu. A recent paper explains the team’s full plan, which will enlist the help of cosmic-ray scans to reveal the hidden world inside and help scientists understand how the magnificent structure was built in the first place.

While the inside of the pyramid is an intriguing puzzle, its history is equally as fascinating. The ancient structures were largely influenced by ancient Egyptian culture. The pyramids stood as physical representations of eternity for the pharaohs who were believed to have become gods in the afterlife. In order to prepare for their journey to the next world, massive pyramid tombs were created and filled with essentials that the ruler would need to sustain themself in the next world.

Pharaoh Khufu set out to create the Great Pyramid of Giza in 2550 B.C. The pyramid was built with around 2.3 million limestone and granite blocks. The ancient beauty also offered a new take on the burial chambers. Pyramids during this time period typically sat above underground burial chambers. However, Khufu’s Pyramid included the king’s chamber and a smaller queen chamber inside the body of the main structure.

His son, Khafre, went on to build the second pyramid at Giza around 2520 B.C., while the third pyramid was built by Pharaoh Menkaure in 2490 B.C. Together, the three pyramids create a unit that is equal parts charming and mysterious.

Scientists will rely on cutting-edge technology to scan the Great Pyramid. According to the new research paper, advanced cosmic-ray scans in the form of muons will be employed to peer inside the structure. Muons are created when high-energy particles like cosmic rays collide with the atoms in Earth’s atmosphere. The resulting elementary particles, the muons, are more powerful than X-rays.Muon tomography utilizes cosmic rays of  muons to generate a 3D image through thicker material. This technology will be used to penetrate deep into the structure and get a clear view of what lies inside the pyramid.

The ScanPyramids project, which led to the initial discovery of the two voids, utilized muon tomography. However, researchers explain that the new venture will include a telescope system that is 100 times more powerful than the technology used in 2017. “[It] will image muons from nearly all angles and will, for the first time, produce a true tomographic image of such a large structure,” the researchers wrote in the paper.

Because of the large size of the muon detectors, the paper lays out that most of the data will be collected from the outside and along the base of the Great Pyramid. This will actually allow the team to collect data from all angles and potentially capture even the smallest artifacts in the hidden chambers.

While this project could solve the mystery behind the voids, it’s still in the works. The team recently received approval from the Egyptian Ministry of Tourism and Antiquities to conduct the scans. However, additional funding is needed to build the equipment and place it beside the Great Pyramid, which could take at least two years. For now, questions remain, with the answers locked inside the Great Pyramid.