Exoplanets around white dwarf stars are particularly hard to find. But a new method involving the James Webb Space Telescope could soon reveal them 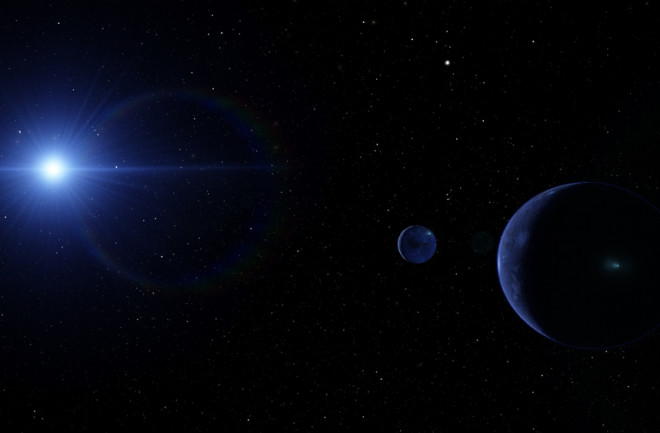 The Solar System is surrounded by a colorful array of stellar neighbors. Within about 30 light years of here, there are 74 main sequence stars, 284 red dwarf stars and 21 white dwarfs.

These stars are attractive targets for exoplanet hunters because, being so close, they are relatively easy to study. Indeed, astronomers have found planetary systems around 60 of them.

However, most of these are around main sequence stars and red dwarfs. By contrast, only a handful of exoplanets have ever been found around white dwarfs. That’s because the main planet finding techniques do not work well for these stars.

So astronomers would dearly love to have another way to look for exoplanets around white dwarfs, particular those 21 neighbors that are tantalizingly close.

The new technique should be capable of determining the atmospheric make up of these planets and even of spotting biosignatures in their atmospheres. Two techniques currently dominate the way astronomers search for exoplanets. Indeed, 98 per cent of all exoplanets have been found using them.

The first measures the brightness of a star and detects exoplanets by the drop in brightness as they pass in front. The problem with this transiting technique is that white dwarfs are tiny, with a radius less than 2 per cent of the Sun’s. They are also relatively dim with only a thousandth of the Sun’s luminosity. This makes transiting measurements challenging.

The second main technique measures the way a star wobbles as planets orbit around it. This radial velocity change shifts the spectrum of the star, which astronomers can see by looking at the various spikes and dips in the spectrum to see how they move.

The problem with white dwarfs is that their spectra are almost featureless, like perfect black bodies. These smooth spectra make radial shifts hard to detect. Indeed, not a single exoplanet has been found around a white dwarf using this method.

But Limbach and colleagues realized that these featureless spectra might allow them to spot exoplanets using a different method. Their new technique relies on the fact that exoplanets absorb light from their parent stars and tend to emit it again in the infrared part of the spectrum.

So Limbach and co imagined that in some circumstances it might be possible to see this infrared exoplanet spectrum superimposed on the featureless black body spectrum of the white dwarf. The recently launched James Webb Space Telescope is ideally suited to this kind of observation because it is tuned into the infrared part of the spectrum.

To test their idea, the team created a model that simulates how the spectrum of a known white dwarf would look if it were orbited by a Jupiter-sized exoplanet or by an Earth-sized body.

They then determined how long the James Webb Space Telescope would have to study these stars to gather enough light to be able to spot these features.

Finally, they simulated how the spectrum from an exoplanet atmosphere filled with biosignatures such as methane, ozone and water would look and whether they could also be observed.

The results suggest that the James Webb Space Telescope could be a potent finder of exoplanets around nearby white dwarfs. Limbach and co say that just a couple of hours of observations should reveal whether a Jupiter-sized body is orbiting any of the nearby white dwarfs. In some cases, a Jupiter-sized exoplanet could be brighter than its host star in the infrared part of the spectrum.

Longer observations of around 10 hours would be needed to reveal Earth-sized exoplanets around our nearest 21 white dwarf neighbors. And biosignatures will be even harder to detect but Limbach and co say they could be observable around our closest six white dwarf neighbors which are all within 23 light years. The say the James Webb observatory should spot such a signature with 25 hours of observing.

That’s an important result. Various space-based observatories are being planned to look for biosignatures on nearby exoplanets. But Limbach and co show that the James Webb Space Telescope already has this capability for white dwarfs. “If an abundance of life exists in this obscure location we are likely to detect biosignatures on these worlds with JWST in the near future—if we choose to look for it,” they say.

That doesn’t seem such a hard choice to make. White dwarfs aren’t the most obvious places to look for life. They are small and dim so their habitable zone tends to be very close to the star that any planets there would be tidally locked.

But these conditions don’t preclude life by any means. And unlike many other types of stars, white dwarfs are stable for billions of years, providing plenty of time for life to get a foothold, if it can.

So should the James Webb Space Telescope look for biosignatures in these places? Surely it would be foolhardy to rule out the possibility of life without even looking.

How the James Webb Space Telescope Will Search for Extraterrestrial Life