In the 1960s, McDivitt played a pivotal role in several early NASA triumphs, including the first spacewalk and the first crewed orbital flight of the Apollo Lunar Module. 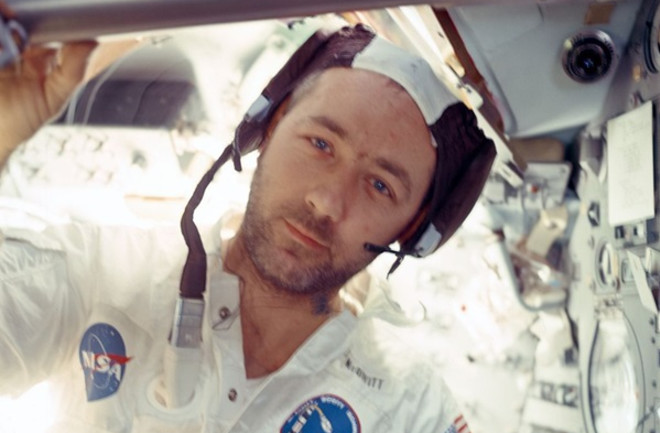 Astronaut Rusty Schweickart took this photo of Jim McDivitt inside the lunar module Spider several days into the Apollo 9 mission. McDivitt’s burgeoning beard reflects the fact that it wasn’t until Apollo 10 that crews began shaving in space. (Credit: NASA)

James “Jim” McDivitt, a former astronaut who commanded NASA’s first spacewalk during the Gemini 4 mission and later passed on a chance to land on the Moon to become program manager for five Apollo missions, died Thursday, Oct. 13, 2022. McDivitt was 93 years old.

For an astronaut who played a pivotal role in America’s first spacewalk during Gemini 4 in 1965, James Alton McDivitt showed little outward sign of budding genius in his youth. The retired Air Force brigadier general and two-time space traveler instead discovered his lifelong love of aviation amid the horrors of aerial combat.

McDivitt sits for an official NASA portrait. At the time, he was an Air Force colonel; he ultimately retired as a brigadier general. (Credit: U.S. Air Force)

Born in Chicago, Illinois, on June 10, 1929, McDivitt was a son of an electrical engineer and progeny of a staunchly Roman Catholic family. He was schooled in Kalamazoo, Michigan, before working for a year fixing furnaces. “I went to junior college while I got a scholarship to Michigan State,” McDivitt said in a NASA Johnson Space Center (JSC) Oral History interview in 1999. “I didn’t have enough money to go there, so I had to go back to work.”

With aspirations to become a novelist or explorer, McDivitt joined the Air Force one day after the Korean War broke out. Military life suited him. He had never before boarded an aircraft (“never been off the ground,” he said) but was picked for flight training. During the war, he flew 145 combat sorties, winning three Distinguished Flying Crosses and a clutch of five Air Medals.

The Air Force assigned him to fighter squadrons in Maine and New Jersey. Then in 1957, they sent McDivitt to the University of Michigan for an aeronautical engineering degree. While there, he met a master’s student in the same field: Ed White. McDivitt shone as a straight-A student, graduating first in his 607-strong class.

He attended Air Force Test Pilot School at Edwards Air Force Base in California, qualifying along with White in 1959. They lived a block and a half apart in Ann Arbor, Michigan. “He was the best friend I ever had,” McDivitt said of White.

The pair were among nine astronauts selected by NASA in September 1962. That impressive group also included future luminaries such as Neil Armstrong and Jim Lovell.

Standing six feet tall and called “whippet-lean” by Time magazine in September 1962, McDivitt worked on the two-man Gemini spacecraft, which was intended to test rendezvous, docking, and spacewalking procedures before Project Apollo took aim at the Moon.

McDivitt and White were assigned to Gemini 4, a planned seven-day mission that was to surpass the five days spent in space by Soviet cosmonaut Valeri Bykovsky in June 1963. But their record-breaking hopes evaporated when difficulties certifying Gemini 4’s electricity-generating fuel cells shortened the planned flight time to a battery-powered four days.

At dinner one night, McDivitt told his children, aged 5, 7, and 8, about the upcoming mission, hoping to ignite their excitement. His eldest son nonchalantly replied that he had already heard the news at school. His daughter responded likewise. Then his youngest son thought for a moment, before piping up: “Dad, there’s a fly in the milk bottle!”

Though the shortened flight time was disappointing, Gemini 4 was packed with medical experiments. (“Tests and other junk,” McDivitt remarked with studied indifference.) At one press conference, McDivitt joked that only a four-day supply of food “for two normal people” could fit inside the cramped Gemini spacecraft. Without missing a beat, backup crewman Jim Lovell wisecracked: “And these two ain’t normal!”

Another stroke of fortune saw Soviet cosmonaut Alexei Leonov make the world’s first spacewalk in March 1965. NASA had penciled-in a short session of Extravehicular Activity (EVA) for Gemini 5, but in response to Leonov’s achievement, that spacewalk was hastily advanced to Gemini 4.

Under the command of Jim McDivitt, Ed White became the first American to step outside a spacecraft on June 3, 1965, during NASA’s Gemini 4 mission. (Credit: NASA/Jim McDivitt)

Carried out by Ed White and lasting some 20 minutes, the spacewalk evened the score with the Soviets and set the stage for future NASA spacewalks. In his NASA oral history interview, McDivitt said “it probably wasn’t until after the flight that we really began to appreciate the fact that working outside a spacecraft was a lot different than working inside the spacecraft”

After returning to Earth and setting foot on the deck of the aircraft carrier Wasp on June 7, McDivitt whooped with delight. Both men were healthy, negating doctors’ fears that NASA might wind up with two unconscious astronauts after four weightless days.

Apollo 9: Preparing for a Moon landing

McDivitt next helped with the development and testing of the Lunar Module (LM), a bug-like craft that would ferry future Apollo explorers to the Moon’s surface.

Teamed with astronauts Dave Scott and Rusty Schweickart, McDivitt dove into training for a low-Earth-orbit test flight of the entire Apollo spacecraft: the LM and Command Module (CM). Following the Apollo 1 fire in January 1967, missions were correspondingly renumbered, and McDivitt’s crew found themselves pointed at Apollo 8.

But riding a wave of confidence after the maiden flight of the Saturn V Moon rocket, NASA decided to fly Apollo 8 around the Moon in December 1968 with astronauts Frank Borman, Jim Lovell, and Bill Anders. McDivitt and crew was reassigned to Apollo 9. And after several days’ delay, at 11 A.M. EDT on March 3, 1969, the Saturn V roared aloft from Cape Kennedy’s Pad 39A.

Over the course of the next 10 days, in what space historian Andrew Chaikin called “a test-piloting bonanza,” McDivitt, Scott, and Schweickart wrung out the entire Apollo system.

McDivitt and Schweickart undocked the LM (nicknamed Spider) from the CM (Gumdrop) and withdrew to 114 miles (183 kilometers). They tested the LM’s throttleable descent engine and digital autopilot, while Schweickart (who had suffered acute space sickness earlier in the mission) made a spacewalk wearing the Apollo lunar surface suit.

On the final night of Apollo 9, McDivitt privately told Scott that he intended to retire from the astronaut corps.

“It was apparent to me that I wasn’t going to be the first guy to land on the Moon,” McDivitt later said in the oral history. “And being the second or third guy wasn’t that important to me.”

In September 1969, McDivitt became manager of the Apollo Spacecraft Program Office, a post he held until April 1972. McDivitt went on to oversee the planning and execution of all but the last lunar landing mission, retiring from NASA in September 1972.

With McDivitt’s passing, the world has lost another member of the Apollo Generation, who paved a road to the Moon a half-century ago — a road that the Artemis Generation will surely follow later this decade.

McDivitt was the first of only a handful of American astronauts to serve as commander of their very first space mission. When McDivitt was asked by the NASA oral historian why he thought that was, his response was simple.

“Well, I was the best-looking astronaut there was,” McDivitt said with a wry smile, “and so they picked me on looks in there!”