Researchers debate if drawings depict extinct creatures like giant sloths and mastodons, or horse-like figures from the time of Spanish invaders. 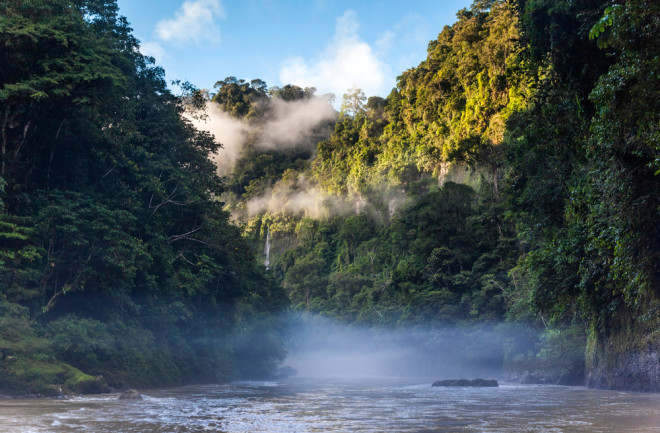 This article was originally published on June 2, 2022.

The Serranía la Lindosa sits deep in the Colombian jungle in a frontier region that divides the basins of the Orinoco and Amazon rivers. The rocky tabletop outcroppings that characterize it, known as tepuis, sit overtop the Guayabero River, which floods the lowland forests for months out of every year.

But while the surroundings may seem otherworldly, the rocks themselves are covered in Indigenous art depicting humans and wildlife. “It’s an amazing landscape — we like to call it, ‘Rock art with a view,’” says Jose Iriarte, an archaeologist with the University of Exeter in the U.K.

Iriarte led new research published in the Philosophical Transactions of the Royal Society B, which argues some of the art depicts Ice Age megafauna. He suggests the creatures include giant sloths and species of elephants and horses native to South America that went extinct a millennia ago.

If this is true, these paintings would date back as early as some of the first known people to colonize this part of what’s today the Colombian Amazon, some 12,600 years ago. “La Lindosa early rock art probably played a role in identity formation and territoriality of the colonizing foragers of the northern Amazon,” the authors conclude in the study. The trouble is, not all researchers agree.

The main debate is whether the paintings at La Lindosa depict long-extinct megafauna. But this isn’t the only controversy surrounding the rock art. In 2021, Iriarte and his colleagues published a study in Quaternary International dating the colonization of early visitors to the area around the rock sites. Various news outlets misreported the authors of the study as having first discovered the rock art at La Lindosa in recent years, when Indigenous people still lived in the area.

Even other scientists reported the presence of the rock art more than a century ago. Agustin Codazzi, a geographer and explorer whose name now graces Colombia’s national cartography institute, mentioned the rock art while making maps of the region in the mid-19th century. But according to Fernando Urbina, a professor of the National University of Colombia who was not involved in Iriarte’s recent study, Codazzi attributed it to the work of Spanish invaders in the 16th century.

“This is completely wrong, of course,” Urbina says.

Other scientists also made note of the rock art, including Richard Evans Schultes, a biologist who wrote the book on ethnobotany after spending years living among Indigenous people in the Amazon. Schultes visited the area in 1943, Urbina says, and researchers photographed some of the cave art about four decades later.

The Debate Between Old or Ancient

Iriarte and his team visited the area in recent years, studying both the cave art and archaeological remains buried at the base of them. In the most recent study, the team writes that various depictions on the rock art of La Lindosa could portray long-extinct Ice Age megafauna. These creatures include a giant sloth, mastodon, and an extinct genus of South American horses and camelid-looking creatures. They all unroll in a marveling display of art that also shows humans, abstract patterns and handprints.

Since most of these creatures have been extinct for millennia, Iriarte and his team believe that at least some of the art dates to roughly 12,600 years ago, when these large animals still walked the Earth.

“We have very likely 13,000 years of paintings in these walls,” Iriarte says.

While Urbina holds Iriarte and his team in high regard, he contests the ages of these depictions. He says they were likely made after the arrival of the Spanish invaders in the region in the 16th century.

For starters, he believes the horse-like figure likely depicts a European steed. Cows and a bull seem to surround the horse depiction, he says — another animal that only arrived with the Europeans.

Iriarte counters that the heavy head of the horse doesn’t square up with the image of domestic steeds. “It’s very different from the slender Arabian horse that Europeans brought to the region,” he says.

Meanwhile, Urbina says the camelid figures could be llamas rather than an extinct species of palaeolama as Iriarte’s team hypothesizes. These South American camelids aren’t typically found in the Amazonian region of South America, Urbina says. But the people living around La Lindosa could have been familiar with them because of contact with Andean people through trade and travel.

As for the giant sloth, he believes it could represent a capybara — a large rodent still found widely in South America today.

However, to Iriarte, the contested sloth creature has giant paws, unique claws and a body position more consistent with a sloth. “There are paintings of capybaras in La Lindosa, and they look completely different from this one,” Iriarte says.

Finally, Urbina says that several images appear to represent dogs the invading Spanish army used “to generate terror” among the Indigenous people. The way they are shown jumping at human figures seems like an artistic portrayal of the terror Indigenous people felt for these dogs. “These war dogs were those that were featured in the figures at La Lindosa,” Urbina says.

Urbina doesn’t completely contest the idea that some of the rock art dates back more than 10,000 years — he also believes that the painting went on for millennia. He just doesn’t think this series of paintings are that old.

It’s difficult to say one way or another, since researchers haven't used radiocarbon analysis or other techniques to date any of the rock art. Some archaeologists have developed new techniques for dating rock art in other parts of the world that researchers could apply here in the future, settling the collegial debate over the age of some of these depictions.

Iriarte says that some of the other archaeological work at La Lindosa has already revealed traces of the red ochre used in the painting of the wall in much older deposits, but work on this is ongoing and not yet published.