The Nobel Prize-winning scientist paved the way for women in science. 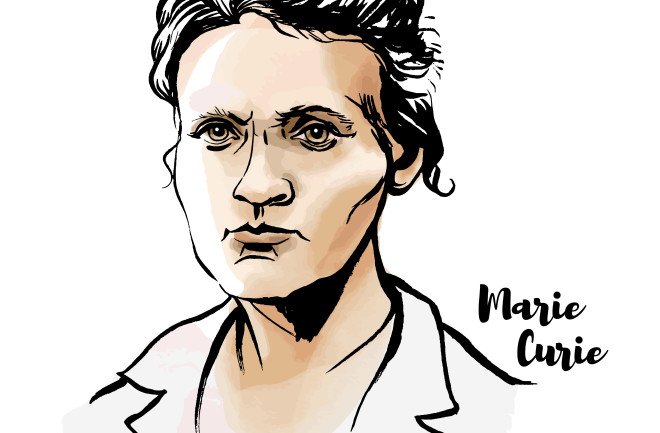 Marie Curie (1867-1934) was often the only woman in a room full of male scientists. But that didn't stop her from ﻿being the first female to win a Nobel Prize, and the first and only to win the award in two separate fields.

The Polish-born French physicist gained recognition for her research on radioactivity, but she racked up accomplishments throughout her life. Marie was a child prodigy who exhibited extraordinary skills as young as age four. Born to two teachers who had instilled the value of education, 4-year-old Marie taught herself to read both French and Russian. Equally as impressive was Marie's memory, which allowed her to recall vivid events from her toddler years.

In 1891, her French came in handy as the young scientist headed for Paris to further her education at Sorbonne University, where she studied chemistry, maths and physics. There she discovered two radioactive elements: radium and polonium. Soon after, she met her husband and science partner, Pierre Curie. They shared a love for science and research, which led to their ground-breaking discovery of radioactivity — the spontaneous emission of energetic particles or waves via unstable atomic nuclei. The term radioactivity was coined by Marie herself and garnered the world's attention. For their groundbreaking work, the pair received the Nobel Prize in physics in 1903. Even though Marie became the first woman to receive a Nobel Prize, she didn't stop there. In 1911, she became the sole recipient of the Nobel Prize for chemistry for her work on pure radium. Today, her discoveries on the properties of radioactive elements have paved the way for diagnosis and radiation therapy in medicine.

Here are five fun facts about this radiant woman who paved the path for other female scientists to follow:

She Didn't Have a Fancy Lab

When you think of a Nobel Prize-winning physicist, you can only imagine how legit their workspace must be. Marie Curie may have broken barriers in science, but her lab was far from glamorous. When Marie and her husband sought to conduct a series of experiments that would prove the existence of the elements radium and polonium, they needed plenty of space — a traditional laboratory just didn't make the cut. Turns out Team Curie opted to work out of an old shed for much of their Nobel prize-winning research.

She Was a World War I Hero

Curie helped save thousands of soldiers by developing mobile radiology units that were delivered to the front lines for army doctors to use. The portable technology allowed them to X-ray the wounded soldiers and helped guide their surgeries. Over a million soldiers benefited from the “Petites Curies," Marie's invention that came with a generator, a hospital bed, an X-ray and the ability to save a life.

Nobel Prizes Run in the Family

Winning Nobel Prizes was a family affair: The Curie family had a total of five total Nobel Prizes. Marie held the most, with two to her name, while her husband, Pierre, held one. In 1935, daughter Irène Joliot-Curie followed in her parents' footsteps and received a Nobel alongside her husband, Frederic Joliot for their discovery of new radioactive isotopes. Following the family tradition, the youngest Curie married a Nobel Peace Prize winner, Henry Richardson Labouisse, who received the award as the head of UNICEF in 1965.

In 1906, Pierre was killed in a tragic road accident. As a grieving widow, Marie faced the brutal sexism that accompanied her fame as a solo female scientist. It was then that Einstein decided to send a glowing letter to Marie in hopes of uplifting her. The note not only described how Einstein was inspired by her drive and intellect, but also that she had his full support. Here's what the father of modern physics had to say about this remarkable woman: “Marie Curie is, of all celebrated beings, the only one whom fame has not corrupted."

Nothing says true love like a shared passion for science. Marie and Pierre Curie were introduced by Marie's colleague shortly after she graduated from Sorbonne University. The dynamic duo soon became partners in both life and research. In fact, it was Pierre who insisted his wife be equally recognized when awarded the Nobel Prize for their scientific discoveries. Though Marie was often undermined as a woman in a male-dominated field, Pierre backed her every step of the way.

This story is part of an ongoing series exploring famous scientists. Read more about the greatest scientists of all time: