Not all asteroids create extinctions. From space dust to crater makers, here are four interesting things you should know about them. 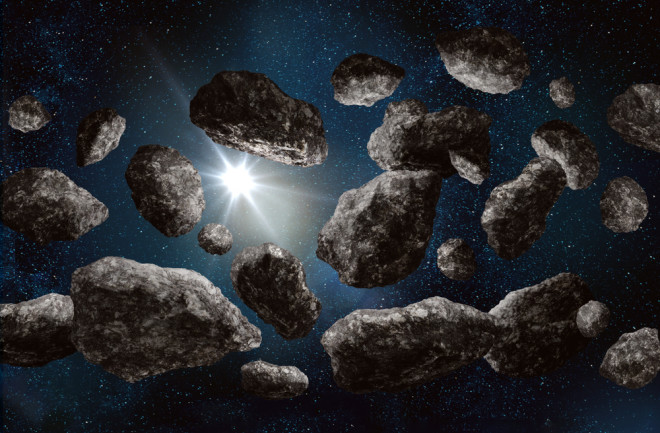 Swirling among the planets in our solar system are pieces of rocky matter called asteroids. Too small to be considered planets, asteroids are a ‘hangover’ from the early formation of the solar system, making them around 4.6 billion years old. There are three types of asteroids — the materials that make up their composition determine them.

C-type, or those that contain high amounts of carbon, are the most common — making up about 75 percent of asteroids. These gray asteroids are typically made of clay, minerals and silicate rocks. M-types contain high amounts of metals like iron and nickel, which most likely contributes to their red color. S-types can range from red to green in color and are mostly made up of silicate materials as well as iron and nickel.

As these rocks travel around the sun, they can collide with planets, create falling stars and form large belts. Here are four amazing facts about asteroids that you may not have known.

1. They Can Create A Big Impact

Asteroids collide with planets. Not all are extinction level events, but some asteroids have impacted Earth in massive ways. About 66 million years ago, an asteroid the size of a mountain hit the coast of Mexico's Yucatán Peninsula — creating the Chicxulub crater. The impact and its damage changed life on Earth and is believed to have contributed to the extinction of the dinosaurs.

The collision triggered tsunamis and fires, along with enormous amounts of dust and soot. The sulfur from vaporized rock acidified the oceans and blocked part of the sun, reducing the amount of light to reach Earth. This inhibited plant growth, leading to a larger problem in the food chain. There have been other asteroid impact events, the biggest ones ranging in time from 35 million to more than two billion years ago.

2. They Form The Asteroid Belt

Most known asteroids are within the asteroid belt, located between the orbits of Mars and Jupiter. According to NASA, the currently known asteroid count exceeds 1.1 million. They vary in size, ranging from as small as dust particles, to boulders to thousands of feet in diameter. Yet the total collective mass of all the asteroids is still less than the mass of Earth’s moon.

Despite the fact that there are millions (if not more) asteroids in the belt, they are spaced far apart — approximately 600,000 miles. Because of that, spacecraft can fly through the belt without colliding with any asteroids. In 1973, A space probe called Pioneer 10, was the first to traverse the asteroid belt.

3. They Can Become Planets

Ceres is the largest object in the asteroid belt and is responsible for one-third of the belt’s entire mass. The Italian priest and astronomer, Giuseppe Piazzi, discovered Ceres in 1801, and experts reclassified it from an asteroid to a dwarf planet in 2006.

A dwarf planet is a celestial body that has enough mass to approximate a round shape and orbit the sun. However, they are smaller than actual planets and lack sufficient gravitational force to accumulate material within their orbits. Ceres is an icy dwarf planet with daytime temperatures sitting at about negative 100 degrees Fahrenheit. At night, it’s even colder, at an astonishing negative 225 degrees. There’s no atmosphere and one day is nine hours long. Scientists believe that Ceres may have supported life at one time.

4. They Can Have Moons

Some asteroids are large enough to have moons. In 1993, the Galileo spacecraft discovered the first asteroid moon. Ida, an S-type asteroid, has a moon named Dactyl. Since then, several other moons have been discovered orbiting asteroids.

They include one named Petit-Prince which is eight-miles-wide and orbits the asteroid, Eugenia. The asteroid Pulcova also has a similar-sized moon. Scientists believe that asteroid moons are created through a collision of two asteroids. If conditions are right, a piece may be chipped off and sent into orbit. According to NASA, more than 150 asteroids have moons, and some even have two.

How Drones Found the Meteorite that Lit Up Australian Night Sky