A team of roboticists and divers used an AI-powered drone to explore underwater caves farther than humans ever have. 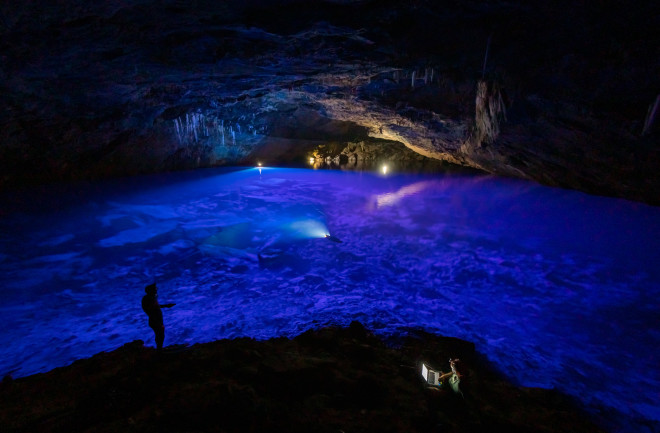 In the spring of 2017, explorer and robotics systems designer Vickie Siegel was navigating a mist-soaked cave in southern Mexico when she slipped, tearing a tendon in her knee. After a grueling self-rescue, aided by her teammates, Siegel flew back to the U.S. for surgery. It was during this recovery period that she first heard about Dragon’s Breath Cave — a sprawling, water-filled cavern buried beneath the sands of the Kalahari Desert in Africa.

“I came across this [documentary] series on Africa, and they do a really short segment on Dragon’s Breath,” she explains. “It just captivated me … It was this amazing juxtaposition of desert and vast amounts of water.” Though some of the world's leading cave divers have attempted to plumb the cave's depths, they've been unable to fully explore the extent of the cave's vast interior.

Two years later, Siegel, along with a team of robotics engineers and divers, arrived in Namibia to see Dragon’s Breath for herself. But the human explorers wouldn't be alone on their expedition — they had brought along an AI-controlled underwater drone to map the cavern’s contours, as well as two other deep cave-diving sites in Namibia.

And with the drone’s help, the team was able to explore these waterlogged caves much farther, and much deeper, than any human diver before them.

Ever since 1986, when explorers discovered one of the world’s largest subterranean lakes at Dragon’s Breath Cave, divers have attempted to probe the farthest reaches of the underground cavern. But, time and again, these attempts have been thwarted by the lake’s substantial water depth.

“The world’s best cave divers have been trying to [reach the] bottom [of] Dragon’s Breath and [nearby caves] for 30 years,” says Siegel, the expedition’s leader. “And they’re just not getting there; it’s too big."

The expedition team was hoping to see more than just the austere beauty of Namibia’s subterranean caves; they wanted to use the remote locations as a testing ground for a new iteration of autonomous, underwater vehicle.

Over the past decade, Siegel has worked as a field operations director for Stone Aerospace, a robotics company in Austin, Texas. Much of the company’s work is dedicated to developing autonomous robots to help NASA explore our solar system. The company has proposed multiple designs for robots and probes that could explore underneath the thick layers of ice covering solar system bodies like Europa. Such icy moons are considered some of the best places in our stellar neighborhood to search for life.

“We are just now beginning to see what we would call ‘true AI’ entering the world of exploration," says Bill Stone, the expedition’s technical lead and CEO of Stone Aerospace. "Even beyond what is being done with the Curiosity [rover] on Mars right now.”

Rather than relying on GPS, radio or any external communication, the autonomous drone, dubbed SUNFISH, uses a sonar mapping sensor to traverse uncharted territory — much like a bat uses echolocation. Stone says the robot uses feedback from its sensors to inform behavior-based algorithms that mimic the way we explore and make decisions as humans. Beyond that, the bot is capable of producing detailed, 3D maps of these underwater locations.

“In this case here, we’re faced with the ultimate unknown,” says Stone. “We don’t even have an orbital observatory or satellite shots like the [Mars] rover ... This was a place to test [the drone] out; to put it in a completely unknown, unstructured environment.”

After landing in Namibia, the expedition’s first stop was Lake Guinas, an open-air cenote — essentially, a natural sinkhole created when a cave’s ceiling crumbles, exposing the groundwater underneath.

Prior to August 2019, nobody knew how deep or how far Lake Guinas stretched below ground. Drone mapping showed the lake to be over 400 feet deep. (Credit: United States Deep Caving Team / Kasia Biernacka)

The site’s biggest mystery, much like the other cave diving locations, explains Stone, is that divers didn’t know what the lake actually looked like beneath the surface. Due to Guinas’ extreme depth and the dangers of underwater compression, human divers were forced to surface before reaching the bottom.

But the maps produced by SUNFISH were able to paint a clearer picture. The drone determined that the cenote was shaped like an hourglass, extending nearly 1,000 feet long and 575 feet wide at the bottom, with a depth of 435 feet.

The group’s next destination, Harasib, located close to Lake Guinas, is a jagged pit with a water-filled shaft beneath. The team had to lower their equipment more than 320 feet down the pit using winches, while the explorers rappelled down using ropes. Once they reached the water’s surface, the drone stuck close to the walls to safely navigate its descent.

The SUNFISH robot on its descent down the entrance to the shaft at Harasib. (Credit: United States Deep Caving Team / Kasia Biernacka)

“It would move, and then do this pirouette where it was scanning [the environment] — and then it would stop and think for a second on the next logical place to move," Siegel says.

“Seeing this beautiful, little orange robot doing these pirouettes in the blue water was just remarkable,” she adds.

SUNFISH was able to roam beyond the limitations of previous divers, mapping the shaft’s complete structure for the first time. Using real-time navigation, the drone discovered a sprawling corridor measuring 260 feet wide and roughly 330 feet high. Beyond that, it continued almost another 1,000 feet to the end of the giant chamber — at a depth of more than 800 feet underwater.

Finally, the group arrived at Dragon’s Breath. The cave gets its name from the humid air that rises through the shaft’s opening. Deep in the cavern’s belly lies one of the largest underground lakes in the world not formed by a glacier.

“It’s an incredible place to rappel down,” says Siegel. “And we knew that, similar to Guinas, beneath the lake’s surface, the walls belled out and it opened up.”

During the robot’s initial pass, SUNFISH sketched the lake’s perimeter walls, creating a map that outlined the cross-section of a deep tunnel, measuring 575 feet wide and almost 200 feet tall. After returning to the tunnel, the robot finally reached the cave’s end. It was more than 670 feet below the surface.

When the month-long expedition was over, the team had produced complete, 3D maps of Dragon’s Breath Cave, Lake Guinas and Harasib. Siegel and Stone say that the maps may be used by geologists and resource managers who want to understand the arid landscape’s unique hydrology. Beyond that, they can act as a valuable navigation tool for divers seeking to visit the site.

And SUNFISH's success might even act as a trial run for future interplanetary exploration, like searching for signs of life beneath the ice on Europa, one of the moons orbiting Jupiter.

This initial 3D map of Lake Guinas shows the raw data cloud that was automatically generated by SUNFISH. Each point on the map, generated using sonar, is tied to the vehicle's position and orientation. (Stone Aerospace, Austin, TX)

“This whole project is a window into where we are with this gradual transition towards true autonomy and AI behavior in completely unstructured environments,” says Stone. “We’re talking about vehicles going into places never before seen by humans.

“And that was what SUNFISH just did, for the very first time,” he adds. “It explored a completely unknown place inside this planet beyond where humans had ever been before.”

Scientists Are Trying to Give Robots Social Skills