Solar energy may fuel our space explorations, but only if the equipment doesn't shatter, freeze or explode. 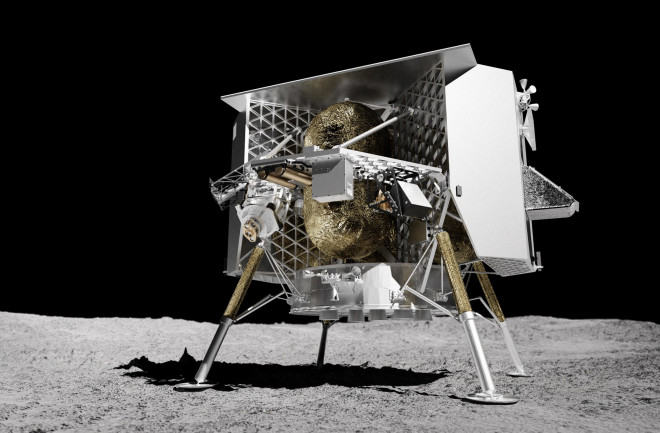 Landers like Astrobotic’s Peregrine will carry the solar-powered CubeRover onto the moon's surface. (Photo courtesy of Astrobotic)

Scientists have long tested solar energy in space, but it may soon arrive on the moon — in the form of rovers equipped with solar panels. On unmanned moon missions, these petite robotic vehicles will test the limits of how humans power their explorations, navigate the moon’s surface, and create potential human habitats far from home.

The team behind them include Mike Provenzano, director of planetary mobility for Pittsburgh-based Astrobotic. Under a NASA contract, the robotics company has scheduled unmanned missions to the moon with the rover in tow for the next year. The first mission, Peregrine 1, is slated for late 2021.

These journeys will represent a significant space milestone: They will mark the first U.S. visit to the moon in 50 years.

A Light But Mighty Rover

The smallest of Astrobotic’s vehicles, the CubeRover is similar in size to a microwave oven and weighs up to 5 pounds — and will include a solar panel mounted on its top. Their fleet also includes the slightly larger MoonRanger, which weighs about 24 pounds.

MoonRanger will be launched in 2023. Once it reaches the moon, the team hopes it will venture from the landing equipment in search of water ice near the moon’s South Pole, says Provenzano. In recent years, scientists have found forms of water across the moon’s surface.

Provenzano explains that CubeRover is modeled after the scalable CubeSAT miniature satellite that was developed in 1999 (and inspired by beanie babies packaging).

The CubeSAT has since served as a standardized building block for larger satellites made of multiple cubic modules. Due to its size and shape, the CubeRover can carry payloads that are the same size as CubeSATs, he explains, so space partners can plan larger cargos based on the familiar CubeSAT unit. The CubeRover’s designers thus hope to set a standard for the “lunar economy” and interplanetary cargo delivery. (Watch a video of NASA testing CubeRover mobility.)

More ambitiously, Astrobotic wants the CubeRover to “democratize access to the moon, making it easier for commercial and academic groups to engage in these science missions” and design their own experiments for the moon’s surface, says Provenzano. Partners aboard Peregrine 1 will hail from six countries and include DHL and Mexico’s space agency, Agencia Espacial Mexicana.

For the polar missions, Taylor has considered placing large solar arrays fairly high up on masts to source solar energy. That would entail vertically aligned solar panels, unlike those common on Earth.

The basic premise is that if you’re at the South Pole, the sun’s ray’s angle is very low on the horizon, Taylor explains. Bluffs and other terrain features, or a nearby lander, could cast shadows on low, horizontal panels.

Once solar panels capture energy, it can be stored in batteries or transferred to power vehicles. This transfer occurs either through cables (“tried and true,” says Taylor) or newer methods including power beaming with lasers.

It will be difficult to turn the vision of sun-powered rovers racing across the lunar surface (like in Ad Astra) into reality. Major roadblocks, says Provenzano, include the moon’s temperature extremes, the radiation on its surface and moon dust.

But first, the equipment needs to survive the launch. Solar panels are delicate, and must resist falling apart as the rocket departs Earth, and later when the lander descends to its destination. Cedric Corpa de la Fuente, an avionics engineer on Astrobotic’s planetary mobility team, is preparing to test a “structural model” — a replica of the solar panels — under launch vibration conditions in the lab to verify that the rover’s panels can hold up.

Lunar night presents perhaps the biggest hurdle for both rovers and panels. The dark side of the moon is brutal: A lunar day lasts 14 Earth days, and during the lunar night temperatures drop for two weeks, sinking to minus 280 degrees Fahrenheit. For a rover to survive that intense of a chill, it needs to store enough power for continuous use through this long, dark period. The vehicle will also need enough power to run heaters that help the equipment bear the freeze. And during the long lunar day, the panels need to withstand hotter temperatures than faced anywhere on Earth.

Then there’s the dust. When moon sand, or regolith, smudges the solar panels, it can reduce the energy they store and cause them to overheat. Regolith consists of about 50 percent silicon dioxide and is highly abrasive. Provenzano notes it can wreak havoc on rover joints and seals, and can cause sparks within the equipment.

As pandemic restrictions eased this spring, testing at Astrobotic resumed to simulate the rover’s navigation in such harsh lunar light and dust conditions. The teams monitor how dust affects rover movement and its solar panel, and how the regolith gums up the panels.

Navigation presents another puzzle, since rovers can’t rely on Google Maps or GPS like we do during Earth road trips. In the case of MoonRanger, cameras on the lander will snap a series of photos to create a high-resolution map of the area surrounding the site where it touches down. When deployed, the rover will take its own photos to aid wayfinding. Then, software using stereo vision and visual odometry (the process of determining position and orientation by analyzing camera images) will create local maps that correlate with the high-resolution ones from the lander.

This navigation technique is somewhat similar to that of the ancient Polynesians, who compared the movements of ocean currents and stars. The team will also track the sun's position, Corpa de la Fuente adds, and they will cast laser patterns onto the surface in order to construct 3D surface maps.

Once CubeRovers arrive on the moon, they will need enough juice to venture from the lander. That's one reason why Astrobotic is developing a touchless docking station with WiBotic, a company that specializes in industrial and underwater wireless charging. With smart-docking software, a rover can locate a charging hub on its own, and once within range, begin recharging.

The smallest rover should be able to recharge in as little as 90 minutes, thanks to a 125-watt charging system and a battery pack that’s similar in size to one for a rechargeable drill. Rovers could recharge themselves by forming an array, a concept that is known as “swarm technology.”

They may also come with accessories: British company Spacebit has developed mini-rover robots to fit inside a CubeSat. Their Asagumo rover is a four-legged robot weighing about 2 pounds; they plan to launch a demo on Peregrine 1 (see video).

All in all, there’s plenty to occupy the mission team. “There's so many ways that a spacecraft can die,” murmurs Provenzano. But the rover’s potential is thrilling. “If [MoonRanger] finds water ice, it will be the first rover to ever discover that on another planetary body. So we're super excited.”

Unmanned lunar test drives may also hold lessons for adventures elsewhere in the solar system, including Earth. For example, wireless chargers adapted for the moon may be useful in “tough radiation environments” like nuclear plants, says Provenzano, where they can power sensors for monitoring temperature and pressure more efficiently than conventional wired methods.

Your Robotaxi Is Almost Here