In a new study, researchers built a battery out of paper and non-toxic inks. The green battery can power small, low-power electronics with the voltage of a standard AA battery. 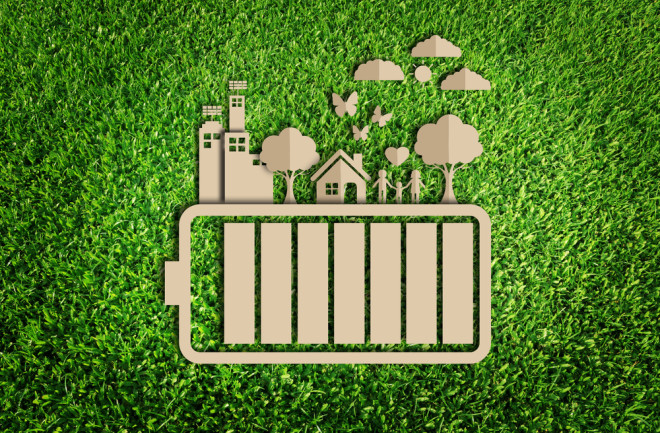 The United Nations estimates that people discard 50 million tons of electronics each year. The “tsunami of e-waste,” according to the World Health Organization director-general, leaches toxic chemicals like lead and mercury, which can degrade environments and harm humans. For example, people living near e-waste facilities suffer from thyroid disfunction, cancer and miscarriage.

In the U.S. alone, people discard three billion batteries each year. The Environmental Protection Agency recommends recycling them at designated facilities because they leak toxic chemicals. But for many, it’s just simpler to throw them in the trash. In a new study, researchers invented a biodegradable, single-use battery built with non-toxic paper and ink. If it’s scalable, the battery could provide a safe disposable alternative for low-powered electronics.

The scientists embedded a one square centimeter strip of paper with salt. On one side, they printed zinc ink to create the negative end of the battery, and on the other end, they printed graphite ink to create the positive end. The researchers connected a device — in this case, a small alarm clock — through wires attached to the strip using a water-repellent wax. They dropped water onto the strip and dissolved the salt to turn it on. This starts chemical reactions that release electrons from the zinc. The briny fluid carries electrons towards the graphite through the wires. This stream of electricity, called a current, powers the product.

Unlike typical batteries, the paper ones are built with environmentally friendly materials. Paper and zinc are biodegradable, and graphite is nontoxic. What’s more, most batteries use highly corrosive acids to carry electrons, whereas this one uses just water.

Admittedly, it’s not the most powerful battery ever invented. It reached 1.2 volts (V), which is close to a standard AA battery that produces 1.5 V. After an hour, the paper dried up and the battery died. But users can connect batteries in series, like when you use multiple AA batteries to power your device, to up the voltage. The team powered the clock, for example, by pairing two batteries to produce 2.4 V of electricity.

The invention is promising for single-use applications. For example, the authors say in a press release that it could power low-powered environmental sensors and medical devices. By striking a balance between sustainability and energy efficiency, the team hopes to temper the tsunami of e-waste into a more manageable wave.

What You Need to Know About the Nuclear Fusion Breakthrough