Fiber Optics Take The Pulse Of The Planet

It’s like radar, but with light. Distributed acoustic sensing — DAS — picks up tremors from volcanoes, quaking ice and deep-sea faults, as well as traffic rumbles and whale calls. 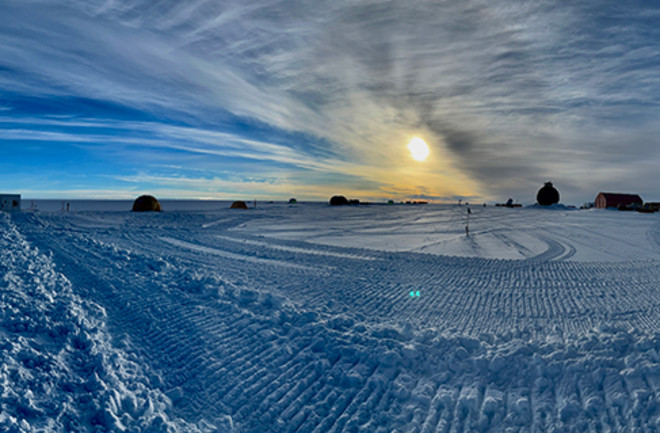 Andreas Fichtner strips a cable of its protective sheath, exposing a glass core thinner than a hair — a fragile, 4-kilometer-long fiber that’s about to be fused to another. It’s a fiddly task better suited to a lab, but Fichtner and his colleague Sara Klaasen are doing it atop a windy, frigid ice sheet.

After a day’s labor, they have spliced together three segments, creating a 12.5-kilometer-long cable. It will stay buried in the snow and will snoop on the activity of Grímsvötn, a dangerous, glacier-covered, Icelandic volcano.

Sitting in a hut on the ice later on, Fichtner’s team watches as seismic murmurs from the volcano beneath them flash across a computer screen: earthquakes too small to be felt but readily picked up by the optical fiber. “We could see them right under underneath our feet,” he says. “You’re sitting there and feeling the heartbeat of the volcano.”

(Credit:HILDUR JONSDOTTIR/Knowable Magazine) Researchers Sara Klaasen and Andreas Fichtner splice optical fibers in the back of a vehicle atop an Icelandic glacier. It is tricky work for cold hands in a harsh environment.

Fichtner, a geophysicist at the Swiss Federal Institute of Technology in Zurich, is one of a cadre of researchers using fiber optics to take the pulse of our planet. Much of this work is being done in remote places, from the tops of volcanoes to the bottoms of the seas, where traditional monitoring is too costly or difficult. There, in the last five years, fiber optics have started to shed light on seismic rumblings, ocean currents and even animal behaviors.

Grímsvötn’s ice sheet, for example, sits on a lake of water thawed by the volcano’s heat. Data from the new cable reveal that the floating ice field serves as a natural loudspeaker, amplifying tremors from below. The work suggests a new way to eavesdrop on the activity of volcanoes that are sheathed by ice — and so catch tremors that may herald eruptions.

The technique used by Fichtner’s team is called distributed acoustic sensing, or DAS. “It’s almost like radar in the fiber,” says physicist Giuseppe Marra of the United Kingdom’s National Physical Laboratory in Teddington, England. While radar uses reflected radio waves to locate objects, DAS uses reflected light to detect events, from seismic activity to moving traffic, and to determine where they occurred.

It works like this: A laser source at one end of the fiber shoots out short pulses of light. As a pulse moves along the fiber, most of its light continues forward. But a fraction of the light’s photons bang into intrinsic flaws in the fiber — spots of abnormal density. These photons scatter, some of them traveling all the way back to the source, where a detector analyzes this reflected light for hints about what occurred along the fiber’s length.

An optical fiber for DAS typically stretches several to tens of kilometers, and it moves or bends in response to disturbances in the environment. “It wiggles as cars go by, as earthquakes happen, as tectonic plates move,” says earth scientist Nate Lindsey, coauthor of a 2021 article on fiber optics for seismology in the Annual Review of Earth and Planetary Sciences. Those wiggles change the reflected light signal and allow researchers to tease out information such as how an earthquake bent a cable at a certain point.

An optical cable captures vibrations, for instance, of seismic tremors along its whole length. In contrast, a typical seismic sensor, or seismometer, relays information from only one spot. And seismometers can be costly to deploy and difficult to maintain, says Lindsey, who works at a company called FiberSense that is using fiber-optic networks for applications in city settings.

(Credit: Knowable Magazine) Whether it’s under a city or on top of a remote glacier, an optical cable will wiggle when disturbed — for instance, by the motion of traffic or of seismic waves. Distributed acoustic sensing, or DAS, captures those tiny movements. Laser light pulses are sent out from the interrogator into the fiber. As they travel, some photons hit defects in the fiber, which scatters them, and some of this scattered light makes it back to the source. Analyzing this “backscattered pulse” and comparing it with the light that was originally sent out allows researchers to detect environmental events.

DAS can provide about 1 meter resolution, turning a 10-kilometer fiber into something like 10,000 sensors, Lindsey says. Researchers can sometimes piggyback off existing or decommissioned telecommunications cables. In 2018, for example, a group including Lindsey, who was then at UC Berkeley and Lawrence Berkeley National Laboratory, turned a 20-kilometer cable operated by the Monterey Bay Aquarium Research Institute — normally used to film coral, worms and whales — into a DAS sensor while the system was offline for maintenance.

Fichtner’s team buried their fiber-optic cable on Grímsvötn. In this video, they are trenching the first few hundred meters with a chainsaw because this part of the caldera rim is too steep for their snow-grooming vehicle.

“The ability to just go under the seafloor for tens of kilometers — it is remarkable that you can do that,” Lindsey says. “Historically, deploying one sensor on the seafloor can cost $10 million.”

During their four-day measurement, the team caught a 3.4-magnitude earthquake shaking the ground some 30 kilometers away in Gilroy, California. For Lindsey’s team, it was a lucky strike. Earth scientists can use seismic signals from earthquakes to get a sense of the structure of the ground that the quake has traveled through, and the signals from the fiber-optic cable allowed the team to identify several previously unknown submarine faults. “We’re using that energy to basically illuminate this structure of the San Andreas Fault,” Lindsey says.

Eavesdropping on cities and cetaceans

DAS was pioneered by the oil and gas industry to monitor wells and detect gas in boreholes, but researchers have been finding a variety of other uses for the technique. In addition to earthquakes, it has been harnessed to monitor traffic and construction noise in cities. In densely populated metropolises with significant seismic hazards, such as Istanbul, DAS could help to map the sediments and rocks in the subsurface to reveal which areas would be the most dangerous during a large quake, Fichtner says. A recent study even reported eavesdropping on whale songs using a seabed optical cable near Norway.

But DAS comes with some limitations. It’s tricky to get good data from fibers longer than 100 kilometers. The same flaws in the cables that make light scatter — producing the reflected light that is measured — can deplete the signal from the source. With enough distance traveled, the original pulse would be completely lost.

But a newer, related method may provide an answer — and perhaps allow researchers to spy on a mostly unmonitored seafloor, using existing cables that shuttle the data of billions of emails and streaming binges.

In 2016, Marra’s team sought a way to compare the timekeeping of ultraprecise atomic clocks at distant spots around Europe. Satellite communications are too slow for this job, so the researchers turned to buried optical cables instead. At first, it didn’t work: Environmental disturbances introduced too much noise into the messages that the team sent along the cables. But the scientists sensed an opportunity. “That noise that we want to get rid of actually contains very interesting information,” Marra says.

Using state-of-the-art methods for measuring the frequency of light waves bouncing along the fiber-optic cable, Marra and colleagues examined the noise and found that — like DAS — their technique detected events like earthquakes through changes in the light frequencies.

(Credit:KRISTIN JONSDOTTIR/Knowable Magazine) On a glacier above Iceland’s Grímsvötn volcano, Andreas Fichtner and Sara Klaasen unroll a spool of fiber-optic cable. They will eventually lay down some 12 kilometers of the cable for distributed acoustic sensing.

Instead of pulses, though, they use a continuous beam of laser light. And unlike in DAS, the laser light travels out and back on a loop; then the researchers compare the light that comes back with what they sent out. When there are no disturbances in the cable, those two signals are the same. But if heat or vibrations in the environment disturb the cable, the frequency of the light shifts.

With its research-grade light source and measurement of a large amount of the light initially emitted — as opposed to just what’s reflected — this approach works over longer distances than DAS does. In 2018, Marra’s team demonstrated that they could detect quakes with undersea and underground fiber-optic cables up to 535 kilometers long, far exceeding DAS’s limit of around 100 kilometers.

This offers a way to monitor the deep ocean and Earth systems that are usually hard to reach and rarely tracked using traditional sensors. A cable running close to the epicenter of an offshore earthquake could improve on land-based seismic measurements, providing perhaps minutes more time for people to prepare for a tsunami and make decisions, Marra says. And the ability to sense changes in seafloor pressure may open the door to directly detecting tsunamis too.

On Grímsvötn, a research team prepares to deploy a cable onto a floating ice field on the volcano’s caldera. Data from that cable have revealed that the ice field acts as a loudspeaker, amplifying seismic tremors from below.

In late 2021, Marra’s team managed to sense seismicity across the Atlantic on a 5,860-kilometer optical cable running on the seafloor between Halifax in Canada and Southport in England. And they did so with far greater resolution than before, because while earlier measurements relied on accumulated signals from across the entire submarine cable’s length, this work parsed changes in light from roughly 90-kilometer spans between signal-amplifying repeaters.

Fluctuations in intensity of the signal picked up on the transatlantic cable appear to be tidal currents. “These are essentially the cable being strummed as a guitar string as the currents go up and down,” Marra says. While it’s easy to watch currents at the surface, seafloor observations can improve an understanding of ocean circulation and its role in global climate, he adds.

So far, Marra’s team is alone in using this method. They’re working on making it easier to deploy and on providing more accessible light sources.

Researchers are continuing to push sensing techniques based on optical fibers to new frontiers. Earlier this year, Fichtner and a colleague journeyed to Greenland, where the East Greenland Ice-Core Project is drilling a deep borehole into the ice sheet to remove an ice core. Fichtner’s team then lowered a fiber-optic cable 1,500 meters, by hand — and caught a cascade of icequakes, rumbles that result from the bedrock and ice sheet rubbing together.

Icequakes can deform ice sheets and contribute to their flow toward the sea. But researchers haven’t had a way before now to investigate how they happen: They are invisible at the surface. Perhaps fiber optics will finally bring their hidden processes into the light.