When it comes to the wood frog, it’s all about the sexy serenade. 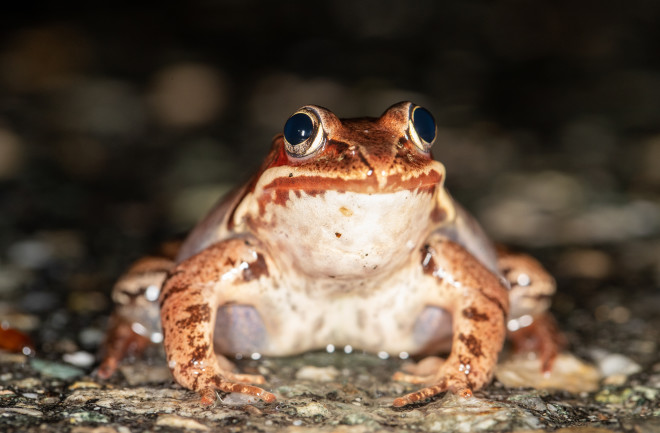 Typical signs of spring include budding trees, a colorful assortment of flowers, tweeting birds and the cacophony of singing frogs. The warmer weather is enough to inspire anyone to sing with joy, but for animals like wood frogs, or Rana sylvatica, their tune means something else.

For the first time, researchers from Dartmouth College used modern technology to accurately record how the individual male wood frog’s mating calls contribute to the amphibian choir as a whole.

As the ice began to melt on the ponds around campus, Dartmouth evolutionary biologist Ryan Calsbeek and his team took to the woods to record the chorus of wood frog mating calls. “Individual contributions to animal choruses have been nearly impossible to understand until now,” Calsbeek said in a press release.

Before conducting their research in the field, Calsbeek and his team were able to determine in a lab study that female wood frogs prefer lower frequency male calls to higher frequency calls. Because of this, the scientists wanted to determine how being part of a group could influence an individual's mating opportunities.

For their research, Calsbeek and his associates used an acoustic camera — similar to those used on heavy machinery like diesel engines and wind turbines. In those instances, the camera can pinpoint where a certain noise is coming from, enabling workers to fix the engine without having to completely disassemble it.

“We kinda thought, ‘Maybe we could point this at an animal,’ ” says Calsbeek. After experimenting on crickets in their lab, the team found that they could “see” the sound coming from the cricket’s hind legs. “We thought […], 'This is going to be gold, we need to take this out to the wild,” Calsbeek says. After pointing the equipment at the frog chorus, they were able to record the calls of 100 male frogs and locate every individual frog in the pond.

According to Calsbeek, the frog chorus has a major influence over whether or not a male wood frog finds a mate. Because the male frog with a higher frequency call is surrounded by males with the more attractive, lower frequency, all the males in the pond have a better chance of finding a mate together than if they were trying to find one on their own.

Calsbeek compares the higher frequency males to Ringo Starr, the drummer for The Beatles. He wasn’t the most popular member of the band, but simply by being a member he more than likely met more fans than he would have by himself.

In the wild, male wood frogs gather in a pond and all sing together as a chorus to attract females. Females select the pond they feel has the best mating options, and the individual males then compete with one another to attract a mate.

While conducting their research, the team recorded the songs of individual frogs as well as the number of eggs laid in each pond. The number of eggs was mapped against the frequency of the male call to determine what the females preferred. Unlike the results in the lab, female frogs didn’t seem to have a preference between high or low-frequency calls out in the wild.

Using the acoustic camera, the team was able to determine that frogs with high-frequency calls would stay near their peers with low-frequency calls to help draw females to them. Overall, the male frogs would work together on their mating chorus, but once the female frogs had chosen their pond, the individual competition to mate would begin.

Wood frogs breed through a process called amplexus, wherein the male frog — which is smaller than the female frog — hooks his arms around the female’s abdomen, linking at his thumbs, and fertilizes the eggs as they leave the female. During this process, there is no internal fertilization.

According to Calsbeek, the use of this modern technology opens the door for future research, especially around rare animals that are difficult to locate and study. “The acoustic camera is very useful for even just finding and doing population censuses.” Now, the scientists' plan to use the acoustic camera to understand what happens when the mating calls of multiple species of frogs overlap in a pond.

Asexual Reproduction is Surprisingly Common in the Animal Kingdom