Why Do Black Cats Have A Reputation For Evil?

Black cats were considered bad luck dating all the way to 1233 with Pope Gregory IX. And even today, their adoption rates are low. 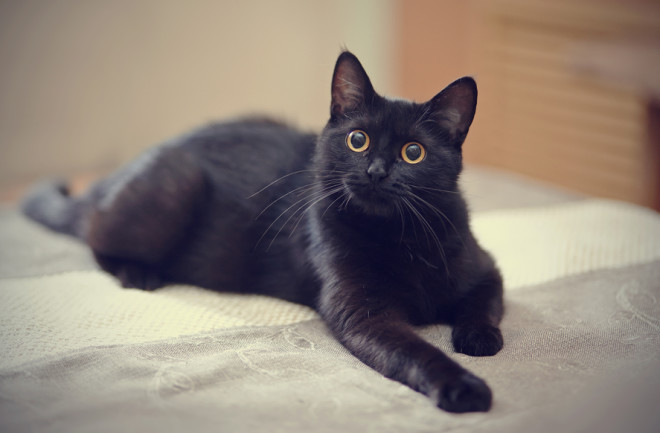 Cats pop up in folklore and history all the way back to the Egyptians — who were notorious cat lovers and even cat worshippers. Cats were adored in ancient Rome, China, and the Middle East as well.

However, cat’s were not adored so much in the European middle ages — especially black cats. In 1233, Pope Gregory IX issued a papal bull — Vox in Rama — as an injunction against (as well as a screed about) satanic cults that he’d been informed were proliferating in parts of Germany.

In the document’s colorful (and disgusting) descriptions of these heretical practices, Pope Gregory claimed that devil worshippers were consorting with their master in the form of a creature that was half man, half black cat. Among other bizarre activities, participants in the ritual kissed the “cat’s rear,” according to a description by medievalist Irina Metzler in the scholarly paper, “Heretical Cats: Animal Symbolism in Religious Discourse.”

The pope disliked other animals, too. He disliked frogs and toads, but they never caught on as Halloween symbols. And the idea that cats were evil, particularly black cats, had staying power. Most serious scholars dismiss the connection between black cats and the increase ravages of plague, but it didn’t help their reputation.

By the 15th century, witches had been added to list of those who consorted with the devil by means of cats. In 1486, Pope Innocent VII announced that the cat was “the devil’s favorite animal and the idol of all witches.” Stories of witches and cats at satanic rituals as well as witches turning into cats at night were common. The latter stories often featured a cat that was wounded; the next day a suspected witch would show similar wounds. Tales of this sort were so frequent you might call it a genre.

All of this may have led to a centuries-long association between cats and evil — and thus the charming arch-backed cat silhouettes that today spruce up our secular decorations around Halloween.

But why did cats grab and hold the imagination, and not, say, frogs? Metzler suggests the answer might lie in the fact that cats are not really all that domesticated. Having one foot in our world (sleeping peacefully by the hearth and chasing away rodents) and one foot somewhere else (who knows where cats go when they disappear for days at a time?) creates what Metzler calls a “conceptual tension.”

Cats are useful because they hunt rodents. But it’s this very behavior that keeps them at least semi-wild. Metzler compares this to heretics, who are themselves not completely domesticated, she says, because they challenge orthodoxy and interpret religious belief however they like. Insisting on freedom and refusing to be constrained by rules? Sounds a lot like a cat, doesn’t it.

“As symbolic animals,” Metzler writes, “cats may be the heretical animal par excellence.”

Bad Luck for Whom?

Still, not every culture — even in Europe — thinks black cats are bad luck. Last May, Mark Rees, a Welsh author who recently published a book of Welsh myth and legend, posted on Twitter this verse from Welsh folklore (attributing the translation to the Reverend Elias Owen):

A black cat, I’ve heard it said, Can charm all ill away, And keep the house wherein she dwells From fever’s deadly sway.

Still, most modern black cats are considered bad luck. Both anecdotal reports and scientific studies have shown that black cats are adopted less often and euthanized more often than cats of other colors. So this Halloween, enjoy the decorations and the folklore, but if you see a black cat, be nice to it. And don’t try to kiss its butt.