Prehistoric hunter-gatherers consistently used the area until the farmers that built Stonehenge moved in. 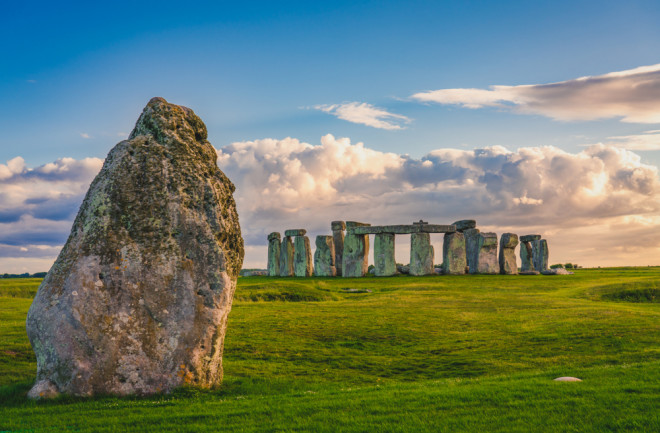 Much about the creation, creators and meaning of Stonehenge has remained mired in mystery for a good portion of the five millennia that have passed since the first stage of its creation.

“Really not much is known about why the area was chosen, and what was going on before it was built,” says Samuel Hudson, a postgraduate research student at the University of Southampton in the U.K. specializing in ancient DNA research.

In recent decades, though, some of these mysteries have been cleared up. For one, we now know that the first stage of Stonehenge's development occurred roughly 5,000 years ago, and that the last stage of building occurred around 1500 B.C. Now, new research by Hudson and his colleagues is shining new light on the hunter-gatherer people that might have lived in the area for millennia — right up to the building of the famed prehistoric monument.

“The late Mesolithic hunter-gatherer environment is a little more dynamic than people would have thought,” he says. “People are exploiting the landscape [at that time] for different reasons.”

Researchers have been excavating the archaeological site of Blick Mead, which sits about a mile east of Stonehenge, for about 15 years. The site has revealed roughly 100,000 stone tools, along with bones and other artifacts dating back thousands of years, Hudson says.

The diversity of findings at Blick Mead include everything from the stone flakes created from tool-making to the bones of aurochs — the prehistoric and extinct wild predecessors of cows. In a study published recently in PLOS ONE, Hudson and his colleagues conducted analysis of pollen and fungal spores, as well as sedimentary DNA, to try to get a picture of what the ecosystem and environment looked like over 5,000 years ago. The latter technique is more often used in paleoecology through lake core sampling, but the researchers in this case retrieved plant DNA from archaeological sediments that were thousands of years old.

But the pollen and fungal analysis revealed that the Blick Mead site was likely an open habitat during that era. The predominant pollens they found were from meadow shrubs and other plants. Such open environments were rare at the time, as most others areas would have been covered in forest. The clearings at Blick Mead would have presented something unique for hunter-gatherers, Hudson says.

Beyond that, the wet grasslands and meadows at Blick Mead would have been perfect for grazing aurochs, which makes sense given the high number of bones scientists have found belonging to the ancient cattle. The presence of so many aurochs bones is an anomaly for the time period: In other Mesolithic remains in the U.K., prey like wild boar or deer are typically more prevalent than aurochs.

There was also evidence of fish bones likely caught in the nearby river. The diversity of artifacts also reveals that Blick Mead wasn’t necessarily used for any one purpose, like a site specifically used for hunting or tool making. “[It] seems like a sort of home base where they did everything,” Hudson says.

It’s hard to know whether this same type of condition prevailed a mile to the west at Stonehenge — the soil there isn’t as suitable for environmental analysis. Just the same, future analysis aims to target other areas around Stonehenge where the soil might reveal more about the environmental past of the area.

Previously, researchers had conducted radiocarbon dating on some of the remains at Blick Mead, dating them to a period that lasted from roughly 8000 B.C. to 3400 B.C. But Hudson’s team also used optically stimulated luminescence dating, which can be used to determine when materials were last exposed to sunlight.

The finely-honed dates reveal that Blick Mead was occupied right up until the first elements of the Stonehenge monument were built. Farmers arrived in southern England roughly around 4000 B.C., which could mean that they contacted the hunter-gatherers that already lived in the Stonehenge area. Other nearby sites like Coneybury show evidence that domestic and wild animals lived side by side. The findings at Blick Mead also support the idea that there was more cross-cultural contact between farmers and hunter-gatherers in the period leading up to the building of Stonehenge than was previously thought, Hudson says.

More than that, the long-term presence of hunter-gatherers in this area reveals it was a persistently attractive place for hunter-gatherers, who hunted and feasted in the area, and for farmers, who used the open area for cultivation and monument building, Hudson says.

The findings also reveal some level of consistency between the Mesolithic hunters and later herders that live in the area. “Where wild cattle once roamed and were hunted, 1,000 years later domestic cattle grazed in the same landscape,” Hudson says.