What Did the Venus of Willendorf Originally Represent?

Similar Stone Age figurines of women with enlarged breasts, protruding stomachs and ample hips have been found across Europe and Eurasia. Their purpose and who created them have long been archaeological mysteries clouded by bias. 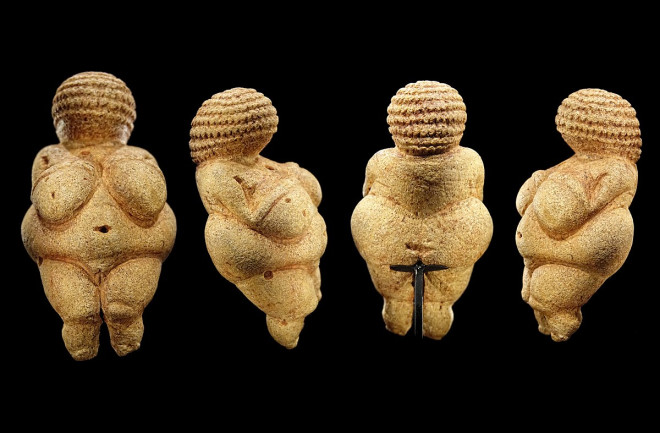 Venus figurines are some of the oldest works of art that have survived from the Late Stone Age, but we still don’t know a lot about them, other than the fact that they have appeared across a wide swath of Europe and Eurasia over at least a 20,000-year period.

Many were likely intended to be handheld and depict female figures carved out of a variety of materials including clay, ivory, bone or soft stones, often with wide abdomens and exaggerated reproductive organs.

The first-known statuette of this kind to be uncovered by archaeologists was the so-called Venus impudique, a headless, footless and handless figure discovered in 1864 at a site in southwestern France.

But the most famous is perhaps the Venus of Willendorf, a limestone figure depicting a faceless woman with plaited hair or some kind of headdress. This artifact was found in Austria in 1908 and dates to roughly 25,000 years ago. The Venus of Hohle Fels, on the other hand, is between 35,000 and 40,000 years old, making it the oldest known among all Venus figurines. Made of mammoth ivory, Hohle Fels was found in a German cave in 2008.

A later example would be the Venus of Monruz, an 11,000-year old abstract pendant made of jet stone, found in Switzerland in 1991.

Given that they were created before the advent of writing and are often found with little else in the way of cultural context, the interpretations of the figurines have varied wildly throughout history. Some experts believe they represent everything from self-depictions of women to ancient pornography. But many of these interpretations have now been discredited for the inherent sexism or racism they carry. In some ways, the interpretations reflect the thinking of the period more than they do the thinking of the Stone Age people who first created them.

“We projected our ways of thinking back into the Paleolithic,” says Tosca Snijdelaar, a Dutch historian who has been studying the figurines for the past dozen years.

Times were very different in the late 19th and early 20th century when the first of these figurines were discovered. Like many professions, the field of anthropology was dominated almost entirely by white males, and many interpretations about ancient cultures reflect this bias. The French name of the first figurine ever discovered, the Venus impudique, translates to “immodest Venus.” In other words, the figure was named to intentionally contrast a style of Roman statues known as Venus pudique, which depicts a nude goddess of love covering her genitals with her hands.

“There was this automatic assumption that [Venus figurines] were made by men,” said Catherine McCoid, a retired anthropologist who has studied the figurines.

“When they wanted to be civil, they said it was cultic,” says Snijdelaar, adding that she doesn’t agree with these interpretations.

Bringing Women Back Into the Picture

Eventually, the times began to change and anthropological interpretation caught up. By the 1990s, McCoid and her colleague LeRoy McDermott, also now retired, coauthored a seminal paper titled “Toward Decolonizing Gender” that examined these figurines from a female point of view. This work was released as a new wave of feminist ideas began to emerge, and this influenced anthropological interpretation.

“We live in a society that has been male-dominated for so long,” McCoid says. But anthropology has changed a lot, particularly in the past couple of decades. “Our own consciousness keeps evolving.”

So just because Europeans lived in a more chauvinistic society in the not-so-distant past doesn’t automatically mean that was the case in the Stone Age. “Those people were living in truly egalitarian societies,” McCoid says. “They were hunter-gatherers, they lived in a communal sharing society. Women were equal.”

While male anthropologists of the past two centuries may have assumed these figures were made by men looking at women, McCoid says the shape of many of the figurines suggests they were likely self-portraits of the women that carved them. Given that mirrors hadn’t been invented yet, a woman carving her own shape would be looking down at her own body, resulting in the perspective of exaggerated breasts and bellies and narrower lower legs.

“When you look at yourself, you’re looking down, that’s the perspective you see,” she says.

McCoid and McDermott believe the figures could have been created to help women teach each other. Archaeologists have only turned up a small number of statuettes that survived, and it's possible that greater numbers once existed and were used by women to depict the various stages of pregnancy and childbirth.

“A woman is helping another woman to understand what’s going to happen or what is happening,” McCoid says.

Snijdelaar says that while these types of Stone Age depictions are well-known as Venus figurines, she hopes that the name is changed to reflect something a little less charged by outdated modes of thinking.

“A lot of researchers, including me, would welcome a neutral name like: ‘female representation’ or something like that,” she says. “But alas, consensus is far away.”

Snijdelaar believes that while the McCoid and McDermott interpretation was new and creative at the time, it too may be biased, by the feminist wave of the period.

“I think all researchers of the European Paleolithic agree on the figurines to be symbols of something,” she says. “You won’t find that ‘something,’ though, when you go on thinking back and projecting contemporary values into the Paleolithic.”

To interpret the meaning of these female representations, she prefers to go farther back in the history of our species. When frightened, threatened or anxious, humans sometimes experience symptoms of sexual arousal like erections or lubrication. Snijdelaar believes that somewhere along the line, early humans must have associated the fear response to certain physical attributes — and that Venus figurines embody that.

“They had their own fears, they knew what happened in their bodies,” Snijdelaar says. “Being able to feel anxiety is therefore very adaptive. Without it, human survival into modern times would have been rather uncertain.”

Our nearest surviving relatives, the great apes, also seem to have this awareness. Primatologists have reported how great apes often communicate by touching each other’s vulva or penis. These actions can bring reassurance or enforce a social pecking order. But a jolt of adrenaline when provoked also gives apes (and humans, for that matter) a temporary boost in strength. This influx of power in humans and our ancestors is sometimes accompanied by signs of arousal in our sexual organs. Showing off an engorged vulva or erection can serve as a warning sign or a way to ward off threats from other apes or animals.

Stone Age humans might have just taken the extra step and projected a sense of power onto a physical object — a kind of protection talisman they wore or may have used in rituals. Some might have been kept in houses around windows or hearths, Snijdelaar says.

In other words, these female representations in Stone Age people might have symbolized the same type of power as phallic symbols that are often also represented in cave art and other artifacts from the era.

“People in the Paleolithic have noticed this bodily reaction and interpreted it as a reaction to protect from bad things happening,” Snijdelaar says.

What Legalizing Marijuana Does to Synthetic Poisoning Cases

How Do Parents Understand A Baby's Cry?

People Are Drawn To Others With Similar Body Odor