Is it a disease? A toxin? A parasite? Ecologists and wildlife health experts are working to solve the mystery of why so many songbirds in the Eastern and Midwestern U.S. are sick and dying. 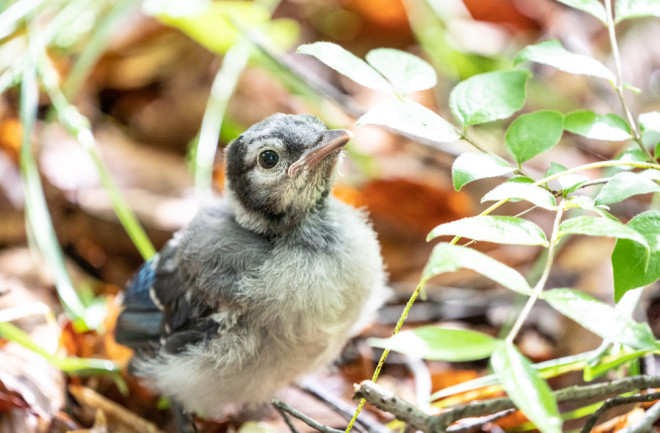 When Brian Evans, a bird ecologist at the Smithsonian Migratory Bird Center in Washington D.C., started hearing stories about young birds with crusted-over eyes behaving strangely, he says didn’t think much of it. He sees eye infections pretty often in backyard birds, and “frankly fledglings acting weird isn't that strange either. They're fledglings. They're new to this world, they're gonna act weird.”

Then, over the course of a single day in mid-May, two different neighbors and one of his colleagues showed him the sick birds they’d found — all with crusty eyes and neurological symptoms like seizures, loss of balance and lethargy. He reached out to City Wildlife, a local wildlife rehabilitation center in Washington, D.C, and was shocked to hear that the number of sick birds they’d seen had increased by more than 30 percent in a month. Other wildlife centers said similar things. By the end of May, they had a listserv.

Thousands of cases of mysteriously ill songbirds have now been reported in at least 10 Eastern and Midwestern states. Scientists from federal and state agencies and wildlife health centers are collaborating diligently to determine the cause, and perhaps find a treatment for what has so far proved to be an untreatable malady.

“I’ve read a lot of frustration about why we don’t know anything yet, [but] I'm really impressed about what we've learned so far and how quickly these collaborations have developed and evolved to address the issue,” says Evans.

What We Know, and What We Don’t

Though over a dozen species have reportedly been affected by this mystery ailment, four — common grackles, blue jays, American robins, and European starlings — make up the majority of cases. The condition overwhelmingly affects young birds. Possibly because their immune systems are weaker, says Nicole Nemeth, a veterinary pathologist at Southeastern Cooperative Wildlife Disease Study at the University of Georgia, Athens.

Death seems to descend quickly once birds start showing obvious neurological symptoms, says Evans. A neighbor brought him a sick crow and “literally within minutes, it had gone between being living and standing on the street and looking normal but acting confused, to a dead bird in a box.” Other accounts from wildlife centers tell of birds deteriorating and dying within 48 hours.

Cases have appeared to spread outward from the D.C. metro area, but that doesn’t necessarily mean it’s a transmissible disease. Fledging happens later in the season in Northern states, so a “spread” North could simply be due to geographical differences in fledging season, Evans points out. Plus, people are more on the lookout now that there’s been news coverage on the sick birds, which could make the spread look faster. Inconsistent regional reporting also means that scientists don’t know exactly how many birds have died from this illness or whether it will have a long-term impact on the population.

“Because we don't know what exactly is causing it, we don't know how to predict it or when it might happen again, you know, and that worries me a bit,” says Nemeth.

There, pathologists like Nemeth perform autopsies on dead birds, look at tissues under a microscope to look for anything unusual and run lab tests for pathogens and toxins. So far, they ruled out bird flu, West Nile, salmonella, chlamydia and several viruses and parasites.

Other than that, there haven’t been many clear-cut answers. There’s the eye inflammation, sure, but it’s hard to compare across specimens from different species who have been dead for different amounts of time. Many birds tested positive for a bacteria called Mycoplasma, which can cause eye infections, but it doesn’t explain the neurological symptoms. “That’s still a little bit of a mystery,” says Nemeth. “We haven’t seen anything obvious in the brains.” Some birds have insecticides in their systems, but Nemeth and her colleagues are unsure if it’s at an abnormal or potentially deadly level.

As an ecologist, Evans pays attention to changes in the environment that might affect the birds.

What immediately came to mind when he first became aware of the bird deaths in May was the Brood X periodical cicadas, which were emerging in full force in the D.C. area at the time. “Cicada hypotheses [were] easy, in part because I was surrounded by cicadas.” And the local birds were eating a lot of them. “They basically went to a cicada buffet.”

The coincidental timing of the cicada emergence and the uptick in bird deaths sparked several hypotheses. Could some cicadas have be carrying a disease or parasite that was infecting the birds unlucky enough to make a meal of them? Could they have accumulated pesticides or toxins during their 17-year nap that mama birds were unwittingly feeding their nestlings? This isn’t the first time that bird populations have appeared to decline during a big cicada emergence, though the dramatic deaths seem to be new.

By now, cases have cropped up beyond the area where the cicadas were active and are continuing even after the cicadas went away so they seem less likely to be a culprit. Just in case, scientists at the Smithsonian’s Center for Conservation Genomics will analyze dead cicadas and samples from dead and healthy birds to see if there’s any evidence of cicada-borne pathogens.

Even though scientists don’t know yet if it’s a transmissible disease or something else, Evans says, “science moves too slow for us to not act in a way that addresses conservation appropriately.” He advises that people take pre-emptive steps to keep their backyard birds healthy.

One strategy for protecting birds from disease is something we’re all familiar with: social distancing. The National Wildlife Health Center advises that you remove bird feeders and bird baths to discourage birds from congregating and potentially spreading illness. Massachusetts issued the same advice even though no cases have been reported in New England. At the very least, Evans says, it’s a good idea to clean your bird feeders weekly with 10 percent bleach to kill any germs that might be lurking.

If you see a sick or dead bird, regardless of whether it’s showing signs of this mystery ailment, contact your local wildlife experts for advice. Avoid handling birds, especially if they appear sick, and keep pets away from sick birds. If you absolutely must touch a bird — for instance, if you’re turning it over to wildlife rehabilitators — wear gloves or put a plastic bag over your hands.

Both Evans and Nemeth stressed how important community science is to helping figure out what’s killing the birds. “People being interested, aware and caring about wildlife health is super important,” says Nemeth.

Submitting observations of sick and dead birds (even if they died from other causes like to state agencies and the Migratory Bird Center will help ecologists get a better sense of the scope of the problem. The more data they can collect on where and how birds are dying, the better they can identify trends. Long-running citizen science projects like Neighborhood Nestwatch are an invaluable source of baseline bird data.

Although obviously it’s sad that so many birds are dying, Evans thinks that the level of collaboration and mobilization that this event has sparked could help experts be more prepared to handle future wildlife health crises, especially with the looming threat of climate change.

“Maybe we'll have the infrastructure in place to address things like this faster,” he says. “So it might actually be good news for wildlife in general.”

More From Discover
Technology
The Hidden Science Behind Video Games Like The Last of Us
Health
Is Vitamin C Actually an Effective Cold Remedy?
The Sciences
How a Zombie-Ant Fungus Can Infect a Host
The Sciences
Ancient Empires Used Bioweapons to Strike Terror More Than 3,000 Years Ago
Health
Here's Why Coronavirus Cases Are Surging in China
Health
Scientists Say Corpses Can Carry and Spread COVID-19
Recommendations From Our Store
My Science ShopDiscover STEM Kits
My Science ShopDiscover 2022 Calendar
My Science ShopStrange Science
My Science ShopElements Flashcards
Shop Now
Stay Curious
Join
Our List