We Share Smarts with Octopuses, and Now We Know Why

Scientists say that the abundance of microRNA types in our brains is a sign of our intelligence, one which we share with octopuses and other cephalopods. 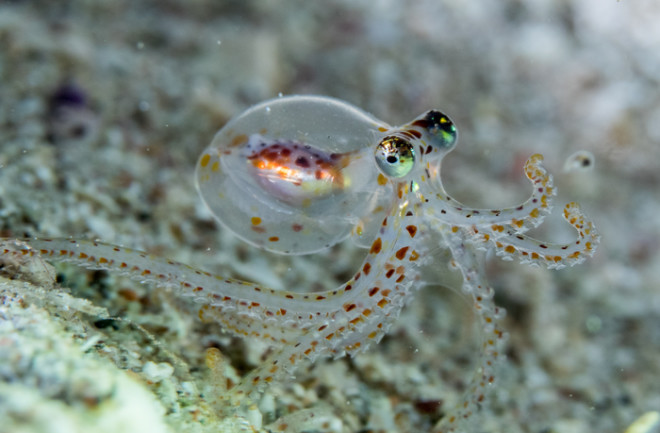 Octopuses are incredibly intelligent creatures, though their intelligence is dramatically different from our own. They benefit from a big, central brain in addition to an ancillary brain in each of their eight tentacles. The animals demonstrate strange problem-solving skills, moving through mazes and opening tough-to-split shells in ways we struggle to understand.

Read more: How Do Octopuses Experience the World?

“They say if you want to meet an alien, go diving and make friends with an octopus,” says Nikolaus Rajewsky, a biologist who studies octopus brains at the Max Delbrück Center for Molecular Medicine in Berlin, according to a press release.

But, while octopuses and their cephalopod counterparts (the squids and the cuttlefish) boast oddly complex brains, the basis of their complexity continues to stump scientists. That is, until now, since a study in Science Advances suggests that their intelligence is due to the dramatic assortment of microRNA types in their brain tissues — an assortment that they seem to share with a wide variety of vertebrates, including our own species.

Approximately 600 million years ago, an ancient worm with minimal intelligence scuttled across the floor of the sea in search of food. In the years that followed, its descendants diversified into two distinct taxa, one without backbones and one with backbones. And though the descendants without backbones (the invertebrates) remained relatively dim, those with backbones (the vertebrates) built increasingly complex brains over time.

The cephalopods form one of the biggest departures from this pattern. In fact, scientists say that these backbone-less mollusks break the mold made by their fellow invertebrates thanks to their intricate brains and their incredible intelligence. But the origins of which are a constant source of confusion for biologists.

Now, the new Science Advances study proposes one possible source of cephalopod smarts. Assuming that small, single-stranded molecules known as microRNA perform a pivotal function in building brain complexity, the study states that the vertebrates (including our own species) as well as the invertebrate cephalopods both share an abundance of microRNAs in their brain tissues.

“This is what connects us to the octopus,” concludes Rajewsky, one of the authors of the study, in a press release.

To uncover any similarities between cephalopod intelligence and our own, Rajewsky and several other study authors assessed 18 distinct types of tissues from deceased octopuses. Their analysis, and their analysis of the brain tissues in particular, revealed a profusion of types of microRNA, which are small molecules that mold to the RNA in an animal’s cells to influence the type and quantity of proteins that those cells produce.

“This is the third-largest expansion of microRNA families in the animal world, and the largest outside of vertebrates,” says Grygoriy Zolotarov, another study author and a student at the Centre for Genomic Regulation in Barcelona, in a press release. “To give you an idea of the scale, oysters, which are also mollusks, have acquired just five new microRNA families since the last ancestors they shared with octopuses — while the octopuses have acquired 90.”

Within that abundance of acquired types, the study authors identified 42 novel forms of microRNA. Plus, the fact that these forms persisted throughout the process of cephalopod evolution indicates that they perform an actual, functional purpose and assist the animals with survival in the wild.

Read more: These Octopuses Throw Objects, Sometimes at Each Other

Ultimately, the study authors say that they will continue to work with these microRNAs alongside the members of a growing network of octopus scientists. This network, they say, allows for greater collaboration in the field and contributes to the increasing interest in cephalopods' unique form of intelligence.

7 Things You May Not Know About Charles Darwin

Why Do We Have Fingerprints?