We Saw An Increase In Shark Sightings This Summer, But Why?

One app lists 145 shark sightings during September alone, all found between Maine and Massachusetts. Climate change could be causing this uptick in sightings. 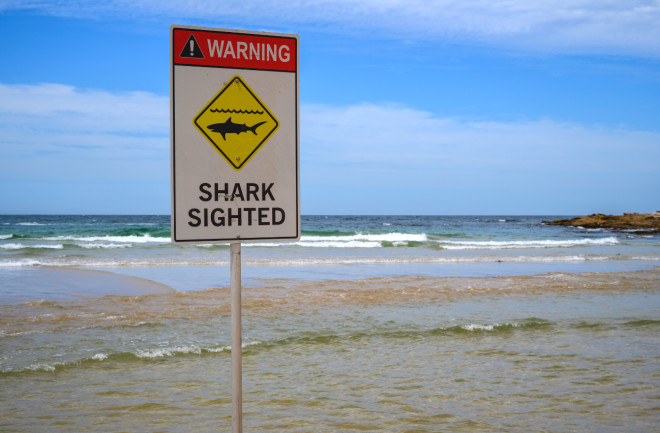 From great whites and blues to tigers and bulls, people have spotted so many sharks this year that at least one news outlet touted it the “summer of sharks.” But what’s really behind the uptick in shark sightings in 2022?

The main reason may be simple: more eyes on the ocean. This includes lifeguards, but also the scientists and hobbyists that are increasingly using technology like drones to scan coastlines for sharks.

“More people are using the water than ever before and those people are now equipped with a cell phone that can instantaneously share any observation,” says Neil Hammerschlag, director of the Shark Research and Conservation Program at the University of Miami’s Rosenstiel School.

The Trouble with Tagging

One way to share such observations is on apps like Sharktivity, which allow citizens to quickly report any fins spotted on the surface. The app — developed by the Atlantic White Shark Conservancy to help humans and great white sharks co-exist peacefully — lists 145 shark sightings during September alone, all found between Maine and Massachusetts.

Another app, created by the non-profit OCEARCH, displays a map of over 400 marine animals tagged by scientists around the world, including great white, mako and tiger sharks. Each animal’s tracker, called a Smart Positioning and Temperature Tag, pings when its dorsal fin breaks the surface — giving a location on the app’s map for anyone to see. As of September 30, the OCEARCH app showed 12 tagged great white sharks near shore in the North Atlantic.

However, just because more people are seeing sharks doesn’t necessarily mean there are more sharks in the ocean. In January of last year, a study published in Nature grabbed global headlines; it posited that shark populations had plummeted by more than 70 percent over the past half-century, due mainly to the increased fishing that’s depleted their food sources.

Instead, it may be that great whites and other sharks are now congregating in specific places off New England to feed or reproduce. “There are shark hotspots where species aggregate at certain times of the year,” explains Hammerschlag. “It can be misleading if animals aggregate when that species is actually declining.”

Hammerschlag speculates that warming ocean temperatures are another reason for the plethora of sharks spotted this summer. A study published in January, which he co-authored, found that tiger sharks are migrating farther north — and earlier in the summer.

By tracking these apex predators from 2010 through 2019, while also analyzing 40 years of tiger shark captures in the western North Atlantic, the researchers found something surprising: For every 1 degree Celsius (1.8 degrees Fahrenheit) increase in water temperatures above average, tiger shark migrations extended north nearly 4 degrees of latitude, or 250 miles.

Larger individuals ranged farther north than smaller sharks. Additionally, tiger sharks arrived in northern waters two weeks earlier on average, perhaps following prey species like tuna. “Places that historically would have been too cold for these sharks, like New England, are now warm enough that they can hang out there,” says Hammerschlag.

On the other side of the continent, off the coast of California, research shows that great white sharks are also ranging farther north as sea temperatures increase.And in Canada’s Bay of Fundy off New Brunswick, scientists are also attributing the rise in blue shark sightings this summer to a warmer ocean.

This redistribution of sharks due to climate change may negatively impact the species’ conservation. As they travel outside of management zones, they are less protected from capture by fishers. And as sharks cruise into new territories, it might also lead to more human-shark interactions.

Risk of Shark Bite Is Infinitesimal

A study published in June showed that more sharks than expected are cruising near crowded beaches in Miami. After tracking 52 sharks — including hammerheads, bull sharks and nurse sharks — off the coast, researchers were surprised to see the animals coming close to shore. In fact, they likened the behavior of these sharks to other urban-dwelling animals that have adapted to live in close proximity to humans, such as raccoons or pigeons.

Although the large and predatory great white, hammerhead and tiger sharks are frequenting popular beaches, you can rest assured that it’s still much more likely to be struck by lightning than to be nipped by a shark. Of the millions of people who swim in the world’s ocean each year, only 73 were bitten by an unprovoked shark in 2021, according to the International Shark Attack File compiled by the Florida Museum of Natural History.

Interestingly enough, two-thirds of those bites happened in the U.S., mainly in Florida.

“Fortunately, we're just not on the menu when it comes to sharks,” says Hammerschlag. Almost all sharks want to avoid people, he adds, and most of the more than 500 known shark species are "pretty small."

To keep both people and sharks safe, researchers are developing new technologies to keep sharks at bay. Electric or magnetic deterrents, for example, work by interfering with their electro-sensory systems. These could be good alternatives to stringing nets around popular beaches, which can injure or kill sharks and other marine animals.

A study published in 2020 investigated the effectiveness of four commercially-available personal electric shark deterrents, which can be worn around the ankle by surfers or swimmers. The most effective model was successful 42 percent of the time at repelling sharks from bait set by the researchers.

Perhaps the best way to foster positive human-shark interactions, however, is to teach people about them — even offering up-close viewing opportunities. A study published earlier this month in Marine Policy found that tourists participating in cage-diving tours with great whites in South Africa had a more positive perception toward sharks afterward.

“Historically, sharks didn't have many friends,” says Hammerschlag. “But as more people are getting interested in sharks and getting fascinated by sharks, hopefully that will lead to better conservation and ultimately saving them.”

For now, sharks still have more to fear from humans than the other way around — and most humans will remain blissfully unaware that the keystone predators are swimming nearby. But if this summer’s rise in sightings is any indication, it’s time we get used to sharing the shallows with sharks.

When People Vandalize Art, Conservators Come to the Rescue