As severe drought impacts bodies of water like Lake Mead and across Europe, it is also revealing mysteries of the Mississippi River – like the Brookhill ferry. 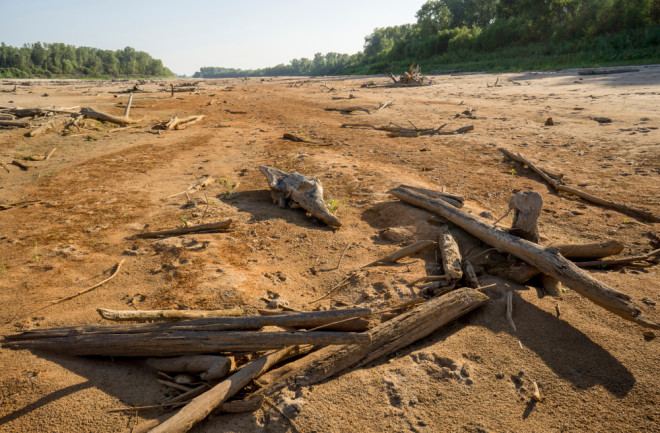 In the last year, severe drought has shriveled the Mississippi River. In places like Tennessee, there are huge expanses of exposed riverbed and only a few disconnected pools of water.

In some areas, the drought has withered the Mississippi to the point that people can stand on land in the middle of the river. More explorers are walking the riverbeds, and they are finding items that were hidden under the gushing water, including a historical shipwreck.

But the Mississippi River is the longest river in North America, and it’s long been used to supply drinking water, irrigate crops and transport goods. And without the needed depth, barges can’t get through and water supplies are threatened.

Walking Up to Wrecks

In southeastern Missouri, hikers have long visited Tower Rock, a rock formation in the middle of the Mississippi River. Typically, visitors must take a boat to reach the rock, but by October 2022, the river level dropped below 1.5 feet, exposing a jagged pathway. Hikers can now walk across the riverbed to the rock without getting their feet wet.

The receding river waters have also revealed long-hidden relics. In Louisiana, the remnants of a sunken ferry are now fully exposed. Archaeologists had been aware of the shipwreck since about the early 1990s, but it was too submerged for them to study.

Archeologists believe the sunken ship was once the Brookhill, a ferry built in the 1890s that ran night service from Baton Rouge to Port Allen. In 1915, the ship was tied to the dock and sunk during a violent storm, according to Charles “Chip” McGimsey, the Louisiana state archeologist.

Most of the ship has deteriorated in the river, and McGimsey says it won’t provide archeologists with much information, except perhaps some shipbuilding insight. He says the true value of the discovery is how much it has excited the public and attracted thousands of visitors.

“Most kids learn history from a book. They are reading or looking at a picture or they go to a museum and look at things in glass cases,” McGimsey says. “There are few chances to reach out and touch history.”

Read more: No End in Sight for Megadrought Crisis as States Fail to Agree on Use of Colorado River Water

In the coming months, the receding river might allow for more exciting shipwreck discoveries. But the withdrawing waters are also exposing more sinister findings.

On October 22, 2022, a woman who was rock hunting with her family in Mississippi found skeletal remains, including what appeared to be a human jawbone and rib. She reported the discovery to state authorities, and the Mississippi Bureau of Investigations is determining whether the bones are human and if they match anyone in the missing person’s database.

Most of the U.S. is currently experiencing a drought. Lake Mead has also exposed shipwrecks, a lost city and human remains. For southwestern states, including parts of California and Nevada, dry conditions have occurred for more than two years. For midwestern states along the Mississippi River, like Iowa and Illinois, the drought began in the summer of 2022.

“The problem is that much of the Midwest is in a drought. Even up in Minnesota or Wisconsin, you aren’t getting heavy rains up there to allow the river levels to go up,” says John Haase a meteorologist with the National Weather Service’s Quad Cities Forecast Office.

The lack of rain means the river levels aren’t replenished to keep up with demand. An estimated 15 million people in 50 cities rely on the Mississippi for drinking water. And on some parts of the Mississippi, the lack of rain has resulted in shallow waters. In the Quad Cities, for example, Haase says the flood stage is 15 feet and the river is currently at 4.4 feet.

For people whose drinking water comes from the Mississippi River, the drought could be a health hazard. The low-levels have allowed saltwater from the Gulf of Mexico to creep into the river. In September, high levels of sodium and chloride were found in the drinking water. Although the chloride levels detected were only likely to affect the water’s smell or taste, residents on low-sodium diets due to kidney or blood pressure issues were advised to be on alert.

The low river levels aren’t just a problem for locals who live near the Mississippi. Barges transporting cargo have been delayed or rerouted, which will have an impact on the national and international supply chain.

About 7 percent of all freight movement in the U.S. happens over water. And barges move almost half the U.S. exported grain supply. At various times, parts of the river have been closed to barges, causing backups and delays.

Significant rain and snowmelt are the only solutions, and neither is in the forecast anytime soon. The U.S. Climate Center is predicting minimal precipitation for the remainder of the year.