These Ancient Amphibians Were as Massive as Hippos

An investigation into a taxon of crocodile-like creatures sizes up several large species. 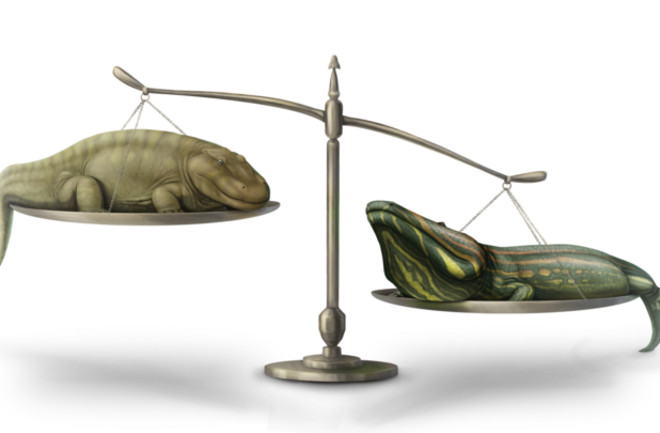 What has more mass, a hippo or an amphibian? While the answer may seem simple, scientists say that the truth isn't always so apparent.

In fact, according to a study in Palaeontology, the temnospondyls — a taxon of primitive amphibians that lived around 330 million to 120 million years ago and looked a lot like crocodiles — came in a variety of sizes. For one of the first times, the study authors say that some of these ancient amphibians were actually as massive as pygmy hippopotamuses.

The Trouble With Size

“The size of an animal is important for many aspects of their life,” says Lachlan Hart, a study author and a paleontologist at the University of New South Wales in Sydney, in a press release. “It impacts what they feed on, how they move and even how they handle cold temperatures.”

“We can’t just weigh them like we could with a living thing,” Hart says in a press release. “We only have the fossils to tell us what an animal looked like, so we often need to look at living animals to get an idea about soft tissues, such as fat and skin.”

Hart and his fellow authors tested 19 techniques on several modern species to confirm their fitness for the ancient amphibians. They aimed to identify a more accurate approach for approximating the mass of the temnospondyls, a “strange” taxon that sometimes evolved “to enormous sizes.” They then applied the most fitting methods to two massive temnospondyls, Eryops megacephalus and Paracyclotosaurus davidi.

To start this process, the study authors chose 19 common techniques for estimating an extinct animal’s mass and applied them to five separate species similar to the temnospondyls, though not members of the taxon themselves. According to the authors, these species included the Saltwater Crocodile (Crocodylus porosus), the Chinese Giant Salamander (Andrias davidianus) and the Japanese Giant Salamander (Andrias japonicus), in addition to two others.

The comparison of the mass estimates and the actual mass measurements of these modern species then allowed the authors to identify the most suitable methods for sizing up animals with a temnospondyl-like lifestyle and look.

“We found several methods which gave us consistently accurate body mass estimations in our five living animals, which included using mathematical equations and 3-dimensional digital models of the animals,” says Nicolas Campione, another study author and paleontologist from the University of New England in Armidale, according to a press release. “As these methods are accurate for animals which lived and looked like temnospondyls, they would also be appropriate for use with temnospondyls.”

Applying these methods to the large Eryops and the even larger Paracyclotosaurus, the study authors ultimately found that these two temnospondyls measured up at around 160 kilograms and 260 kilograms, respectively — a range that reflects that of the modern pygmy hippopotamus.