Of the seven wonders of the ancient world, you can still visit the oldest – the Great Pyramid of Giza in Egypt. 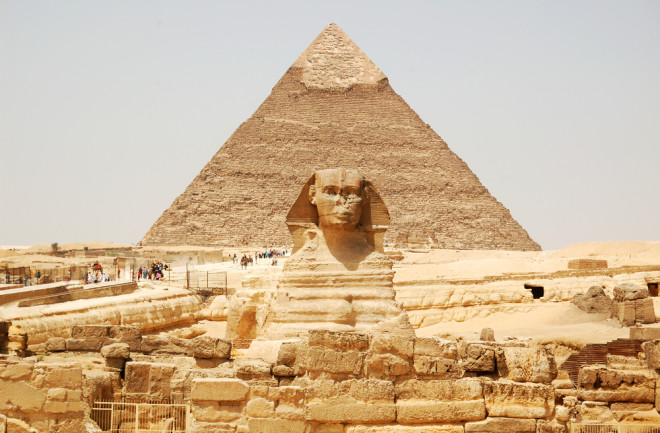 The oldest of the seven wonders of the ancient world is also the only structure that’s still in existence today. The Great Pyramid of Giza in Egypt stands as a testament to human ingenuity.

Napoleon Bonaparte once said that “from the summit of these pyramids, 40 centuries look down on us.” And it’s true, the Great Pyramid was built in the early 26th century B.C. The fact that it still stands today is a wonder in itself.

What Was the Purpose of the Great Pyramid?

The Great Pyramid was built as a grand tomb to the Pharaoh Khufu, who reigned during Egypt’s Fourth Dynasty (2575–2465 B.C.), a golden age of great architectural feats.

Little is known about Khufu except that he was the second king during the Fourth Dynasty and that his full name was Khnum-Khufu, or “Protected by Khnum.” Ancient records show that he likely reigned for around three decades during which he grew Egypt’s borders into the Sinai Peninsula.

Khufu’s son Khafre built the second of the Great Pyramids, as well as the Great Sphinx of Giza, though his brother Djedefre might also have built it. The Sphinx is known as one of the largest sculptures in the world. The third of the three pyramids was built for Menkaure, Khufu’s grandson.

What you didn’t know about the Great Pyramids:

How Was the Great Pyramid Built?

Standing at 450 feet tall, the Great Pyramid is the oldest and largest of the three pyramids. Egyptologists are still debating how humans — without any modern construction equipment — could have built one of the largest structures that the world has ever seen.

It’s thought that around 20,000-30,000 workers puzzled together 2.3 million blocks of limestone, weighing between two and 15 tons each. A layer of smooth limestone would have originally covered the structure, as seen on the cap of Khafre’s pyramid nearby.

The majority of the structure is solid limestone except for two small chambers named for the king and queen, as well as a subterranean chamber with a few air shafts. The subterranean chamber is normally where they laid remains to rest, but in the case of the Great Pyramid, it appears to be unfinished.

The body of Khufu was instead likely placed in the king’s chamber, though the only piece still present is the sarcophagus. His mummified body has never been found and is thought to have been stolen by tomb raiders. Unlike the pyramids that would follow, the inside of the chamber is bare and isn’t decorated with hieroglyphics. The queen’s chamber doesn’t house any queens either. It’s thought that Khufu’s queens, of which there were likely more than one, are housed in mini pyramids in the area.

The ruins of an ancient port unearthed in 2013, may have been a bustling center of activity, used to provide pyramid workers with the supplies needed to undertake construction.

Still, the Great Pyramid of Giza is housed in a good bit of mystery considering how little we know and understand about how it was built. The one thing we know for sure, is that it’s a hearty piece of construction that unlike the other monuments, still exists today.

The other six wonders, including the Hanging Gardens of Babylon, Statue of Zeus at Olympia, Temple of Artemis at Ephesus, Mausoleum at Halicarnassus, Colossus of Rhodes and Lighthouse of Alexandria — fell either to war, fire or natural disaster and mostly everything we know about them today comes from ancient texts in which they are mentioned.

Read more: 5 of the World’s Wonders That You Can See Today

While the Great Pyramid might lack some of the embellishments of the pyramids that would follow, we should still be in awe of the humans who built a structure that stands strong nearly 4,500 years later.