The First Trees May Have Caused Mass Extinctions

During the Devonian period, trees began to populate the Earth. But they also created soil, and the runoff changed the chemistry of the oceans. 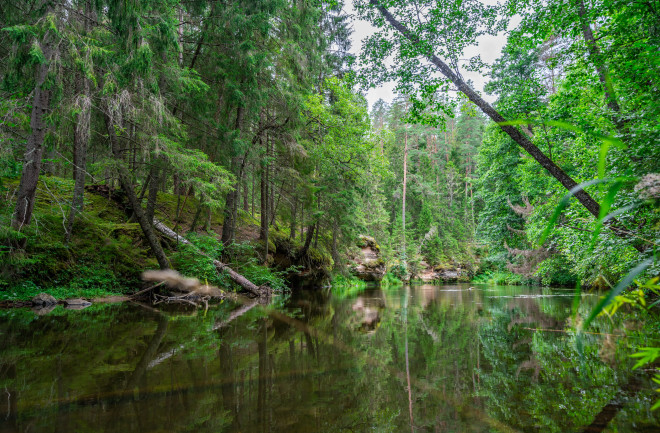 The evolution of some of the very species that now mitigate the level of greenhouse gases on our planet was once fatal for a large portion of life on Earth. About 419 million years ago, the evolution of large trees may have led to a series of large-scale extinctions that lasted about 60 million years, according to a a study published recently in GSA Bulletin.

“When we think about mass extinction events, we’re thinking about something that came from the sky, or from space,” says Jessica Whiteside, a geochemist at the University of Southampton in the U.K and one of the study authors. But in this case, the so-called Devonian mass extinctions may have been caused by something under the Earth — roots, in fact.

“These root system act as the very first organic carbon factories,” Whiteside says. “Humans are not the first life form to severely alter the planet.”

The Devonian period lasted roughly 60 million years of the Paleozoic era — from about 419 million years ago to the beginning of the Carboniferous period around 359 million years ago. Researchers have long known that a series of mass extinctions took place during the Devonian, wiping out an estimated 70 percent to 80 percent of animal species present in the period. At the beginning of this era, placoderms, a class of prehistoric fish, generally still dominated the oceans. These giant fish were well-armored, and researchers have estimated one species being as long as nearly 30 feet, based on fossil remains. “The big predators were these monster fish,” Whiteside says. “They had bulldozers for heads, guillotines for two sets of teeth, and they eat sharks for breakfast.”

Read more: The Devonian Extinction: A Slow Doom That Swept Our Planet

At the same time, life had been evolving outside of the oceans. While plants existed before the Devonian, the earliest known examples were tiny, pin-sized organisms. But by the Devonian, plants had evolved into trees — these first trees, part of the genus Archaeopteris, could reach as high as 130 feet, Whiteside says. And anything standing that tall would have needed a support system to hold it up. “Bigger trees aboveground are balanced by deeper rooting below ground,” Whiteside says.

Complex root systems began to develop, which, over time, also led to the creation of soil as organisms died on land. Unfortunately for the placoderms and many other species in the oceans and fresh waters, this soil covered the planet so thinly that much of it washed off into the rivers and oceans relatively easily. The loss of species is also estimated to have included 99 percent of reefs at the time, Whiteside says.

In the recent study, Whiteside and her colleagues examined traces of fossil phosphorous found in Greenland and offshore islands of Scotland that existed in ancient lakes and rivers. Phosphorous is a common component of soil, and Whiteside’s team used models to estimate how much phosphorous was making its way into the oceans based on the amount they found in fossilized sediments in ancient lakes.

While phosphorous is a nutrient for algae and other organisms, you can have too much of a good thing: Large influxes of phosphorous can prompt huge algae blooms. As these organisms and others photosynthesize, they remove oxygen from the water, producing so-called dead zones where fish and many other sea creatures can’t live.

The models Whiteside’s team ran revealed that the levels of phosphorous was likely high enough to produce large dead zones in the lakes and oceans. This could have caused placoderm species to blink out as the dead zones increased, Whiteside says, as the large creatures began to lose a lot of space they needed to hunt for prey.

This didn’t just happen once. Over millions of years during the Devonian, the levels of nutrients increased several times, parallel to the rough dates we have for the various extinctions that occurred in the period. “It repeatedly seems to happen that pulses of phosphorus are dumped into the ocean, causing these algal blooms,” Whiteside says.

The reason this happened multiple times is likely due to the way plants evolved. Over the millions of years in this period, plants gradually evolved different characteristics that suddenly let them colonize more of the land. As they quickly spread during these pulses, they caused consecutive mass die-offs in the oceans and freshwaters.

Read more: The 5 Mass Extinctions That Have Swept Our Planet

The trees also may have been the causes in chaotic weather patterns that affected life on Earth. More plants means more carbon storage, which may have prompted periods of extreme cooling. “Over the long time scales of the late Devonian, there are long cycles of extreme warmth that are punctuated by short icy climate disruptions as CO2 plummets and ice sheets form — spreading into the low latitudes and over land equivalent to places like Tennessee,” Whiteside says. “The world may have bloomed and warmed, resulting in biotic upheaval, but the planet also froze; doomsday, indeed.”

It wasn’t until after roughly 359 million years ago that the chaos of the Devonian began to settle down and normalize. The soil grew deeper as more advanced root systems developed, retaining more phosphorous on land and limiting the dead zones in the ocean. “The phosphorous cycle advances,” Whiteside adds.

But the Earth was never the same again. Placoderms may have once preyed on sea lilies, but after the former disappeared, gardens of heavily plated sea lilies began to appear more commonly, Whiteside says. Meanwhile, the surviving types of fish, such as sharks and bony fish, began to proliferate. “The really cool, bizarre things all go extinct,” she says.

While these extinctions happened hundreds of millions of years ago on an Earth that looked very different from today, Whiteside says that the same kind of thing may be happening again — this time, due to the dead zones humans are causing in the ocean. Similar to the increase of phosphorous in the Devonian, agricultural runoff and sewage also contain high levels of phosphorous. These nutrient influxes also cause algae blooms in our oceans today, which are correlated with the creation of large, oxygen-free dead zones in our water.

“Marine life is asphyxiated,” Whiteside says. “This is one of these lessons from the past, where something very similar is going on right now. And once again, life is the culprit.”

This Pterosaur Had at Least 480 Hooked Teeth

More From Discover
Environment
From Backcountry to Backyard: Community Snow Observations Wants Your Snow Depth Measurements
Planet Earth
Meet the Firefighting Goats of Dublin
Planet Earth
5 of the Best Winter Activities to Do in National Parks
The Sciences
How a Zombie-Ant Fungus Can Infect a Host
Environment
Hiking With Your Dog Off-Leash Could Create Problems for Nature
Health
Here's How Cooking Fumes Can Harm Your Health
Recommendations From Our Store
My Science ShopDiscover STEM Kits
My Science ShopDiscover 2022 Calendar
My Science ShopStrange Science
My Science ShopElements Flashcards
Shop Now
Stay Curious
Join
Our List