The Butterfly with a Dozen Disguises

In sub-Saharan Africa, an astonishing creature tries to evade notice. Its value for explaining evolution gave it away. 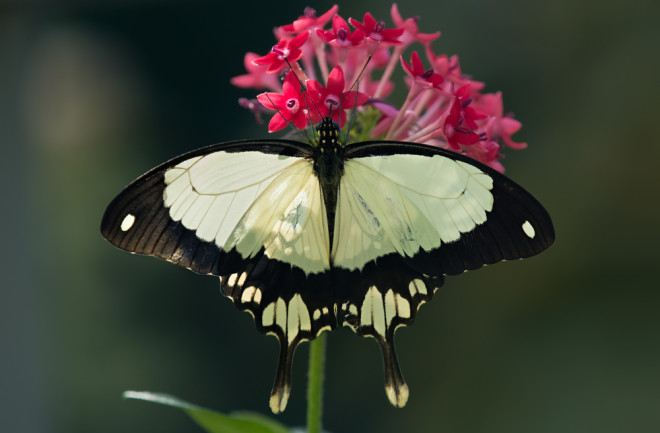 “Naturalists at Nairobi are fortunate,” wrote E. B. Poulton, a prominent British entomologist, in 1906. Kenya’s capital won his praise not for the famed animal migrations of the nearby Serengeti ecosystem, but for a phenomenon much subtler, though no less magnificent.

The object of his admiration was Papilio dardanus, or, as he sometimes called it, “the most interesting butterfly in the world.” At the time, he couldn’t have known just how interesting it would prove, as generations of biologists after him employed the species in their quest to solve the mysteries Darwin left behind. All Poulton knew were the basic facts of this insect’s remarkable evolutionary strategy.

Some prey run fast, some grow strong, others don armor; fragile P. dardanus, showing little promise in the arts of self-defense, resorts to sleight of hand. Though it makes a perfectly safe and satisfactory meal for birds, rodents and reptiles, it is also a consummate shapeshifter: Every female is born with one of perhaps a dozen color patterns, or morphs, all with details strikingly different from the rest. Each one resembles a specific poisonous monarch butterfly, which explains the species’ common name, the mocker swallowtail. By imitating its unsavory cousins, a tasty snack fools predators into leaving it alone.

This ploy, known as mimicry, is common across the animal kingdom. The remarkable thing about the mocker swallowtail is how far it pushes the tactic. Indeed, its many disguises were initially described as separate species. But when biologists bred them in the laboratory, “they got very strange offspring,” biologist Martijn Timmermans says. “It could only be explained by these ‘different’ species being one species.” The discovery opened a world of questions and possibilities.

Since the 18th century, butterflies have stood among the most coveted creatures in the world. Hobbyists have prized them for their sheer beauty, naturalists for the insight they offer into the workings of evolution and natural selection. Today, the Natural History Museum in London boasts more than 13 million specimens, including some 3,500 of P. dardanus.

Timmermans, now a biologist at Middlesex University London, knew little about the species when he joined the museum in the mid 2000s. But after perusing the collection, he says, “I was sold immediately. The variation is just staggering.” Looking at the mocker swallowtails — radically different from one another, yet all akin — he grasped what so many biologists before him had understood: This insect held the key to some of life’s greatest secrets.

By that point, it already had a reputation for furnishing discoveries and settling scientific disputes. In the early years of evolutionary theory, bickering biologists placed P. dardanus at the center of their quarrels over how evolution proceeds — fast or slow. Darwin conceived of evolution as a gradual process, built upon countless “micromutations.” Many renowned biologists joined this camp after him, but a few found a plausible alternative in saltationism, the idea that organisms change abruptly, in “macromutations.”

Gradualists pointed out that a major mutation is far more likely to debilitate than to benefit its possessor. Saltationists, on the other hand, argued that a single small change could never produce a deep enough resemblance between a mimic and the “model” it copies for natural selection to favor it. Are birds really astute enough to notice a minute similarity in wing pattern and avoid it? “I think that this is asking too much,” the geneticist Richard Goldschmidt wrote. And if evolution can’t clear even that first hurdle, a dozen more fine-tunings are certainly out of the question.

The warring factions agreed, however, that a thorough genetic analysis of P. dardanus would reveal the truth. They recognized mimicry as the most instructive form of natural selection and this butterfly as the exemplar of mimicry. It only remained for two University of Liverpool geneticists, C. A. Clarke and P. M. Sheppard, to perform the necessary breeding experiments.

Their experiments, which took place in the late 1950s, provided decisive evidence for the micromutational view. But that’s not the most interesting part. As science historian Frederick Rowe Davis has written, Clarke and Sheppard “accomplished more than the successful defense of gradualism.” The results suggested that the mechanism behind the swallowtail’s mimicry was a supergene, which commanded a whole constellation of individual genes and was therefore capable of major changes that could be easily mistaken for macromutation.

In this way, their work forged a synthesis. Both the gradualists and the saltationists had a point, after all — evolution can’t be reduced to a binary. That’s how most biologists envision the process these days, according to Krushnamegh Kunte, a researcher who has studied P. dardanus at India’s National Center for Biological Sciences. “Butterflies always bring people together,” he muses. “They say that, ‘Yes, you’re right, but you’re also right.’”

Decades later, Timmermans stumbled across the London museum’s P. dardanus collection, which includes some of Clark and Sheppard’s specimens. Inspired, he too chose to investigate how one butterfly can assume so many guises. In 2014 he and his colleagues found the supergene his predecessors had anticipated. It coordinates all the necessary genes so that members of the species don’t wind up with random — and thus evolutionarily useless — color patterns. “There’s something in its genome that ensures it can do it correctly and keep all those variations separate,” Timmermans says.

But the puzzle isn’t fully solved. Researchers still have much to learn about how that supergene controls so many features — not just color, but also wing shape, and even behaviors like flight speed. They also don’t yet know how the mimicry is limited to females, while males all look the same (a fact that allows the overall P. dardanus population to grow larger without the mimics outnumbering the models, which would ironically mislead predators to chow down on both). So the species’ fruitful career may well continue. “Although people have been working on it for so long,” Timmermans says, “I think there’s still a lot we can learn.”

In the meantime, the mocker swallowtail will keep doing what it does best — deceive. Humans may unravel its secrets in the lab, but in the field, the world's most interesting butterfly still has home advantage, as Timmermans can attest. “One of my colleagues caught a dardanus and put it in his pocket, and afterward he had a rash,” he says, laughing. “He made a mistake.”