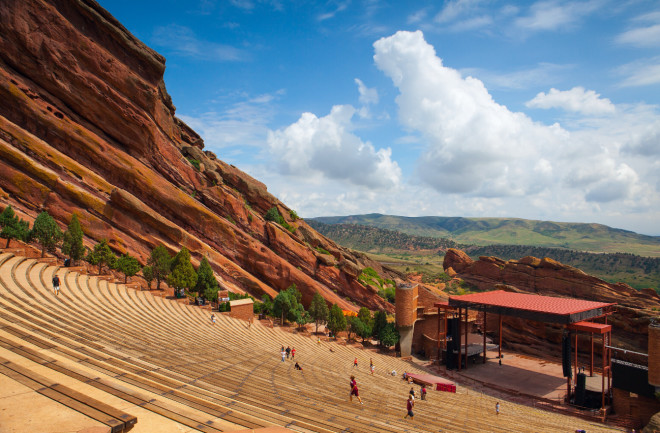 Located about 10 miles southwest of Denver, Colorado, the Red Rocks Amphitheatre is one of the most beloved concert venues in the world. From classical symphonies and the Beatles to John Denver and U2, the list of performers who’ve played Red Rocks since it began hosting concerts in 1908 is nearly as long as the amphitheater’s 2.5 miles of seating.

The reason for its high regard? A combination of naturally occurring geology, man-made architecture and nearly perfect acoustics. But let’s start with the rocks themselves, which are hundreds of millions of years in the making.

Benjamin Burke, an affiliate professor at the Colorado School of Mines, explains that Red Rocks is essentially an ancient delta — a 300 million-year-old accumulation of sedimentary rock that once belonged to what’s known as the ancestral Rockies. Like the current Rockies, these mountains were very tall. But the forces of erosion (wind, precipitation and temperature) worked to bring silty, sandy, muddy waters downstream along a series of large rivers.

These materials created numerous deltas in the area, including the Flatirons region west of Boulder, Roxborough State Park near Littleton, and the Garden of the Gods to the west of Colorado Springs. Together, Red Rocks and the rest of these areas form the Fountain Formation. Though the composition of the region varies, the stuff that forms Red Rocks is mainly sandstone of the poorly sorted variety; it ranges from sandy grains to larger cobbles, Burke says.

After ancient storms sent mud and sand streaming down the mountains, they slowly compressed into rock through the geologic process of lithification. Subsequent erosion of this rock carved out the area where the amphitheater sits today. “The two rocks on either side of the amphitheater are a bit more resistant [to erosion], for whatever reason,” says Burke, referring to Ship Rock — the iconic red stone face to the audience’s left — and Creation Rock to its right. Both stunning, tilted vertical rock formations are taller than Niagara Falls.

The top of Red Rock’s seating area, which provides the amphitheater’s best views of Denver and the surrounding landscape, includes a bronze plaque marking the spot where Fountain Formation rock collides with the 1.7 billion-year-old, Precambrian rock that forms the bottom of the Denver Basin, Burke says. The older rocks in this area were mined for silver and gold during various precious metal rushes between about 1858 and 1893, he adds.

In 1911, three decades before it opened to the public in its present architectural form, world-famous Scottish opera singer Mary Garden performed the first solo concert at Red Rocks. She remarked that she’d never heard more perfect acoustic properties at any opera house in the world.

Burke, who attends at least one show a year at the venue, admits that he isn’t an audio engineer. But he offers a basic explanation: Both Creation Rock and Ship Rock, combined with the stage infrastructure built directly in front of the disc-shaped rock known as Stage Rock, create an ideal transfer of sound.

“The building and the rocks before it really send the sound outwards to the audience,” he says. “The [rock] walls essentially keep that sound in, without there being a roof where there’d have to be sound deadening. So, you get a lot of projection outwards without the reverb, if you will, of the enclosed space for [sound] to bounce around in.”

The role of the rocks in the acoustic profile is likely owed more to size and angle than composition, he continues. While sandstone generally lacks any special acoustic powers, it’s possible it might have some marginal sound-absorbing properties compared to harder rock like granite. “On the whole, rock is still rock,” Burke says. “The fact those walls are there allows for the sound to stay in the amphitheater but not get trapped and bounce back and forth.”

There’s also the elevation aspect. At 6,450 feet, sound actually travels slightly slower than at sea level, thanks to both air pressure and temperature. While that in itself is not noticeable to the human ear or brain, a singer’s performance in thinner air might be.

“It’s always fun, as a Denver local, to see performers come up from sea level,” Burke says. “If the performer doesn’t know what they’re in for, that does somewhat change the delivery a little bit. They end up being a bit breathless.”