Transparent bodies galvanize an evolutionary arms race between predator and prey deep in the ocean. 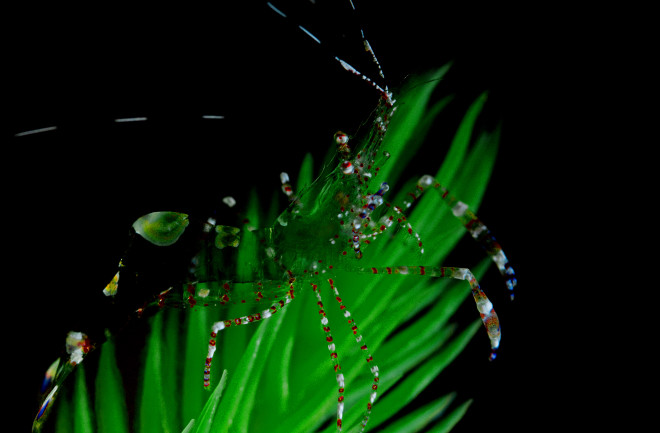 The last glimmer of sunlight disappears in the ocean’s twilight zone, a region that spans 200 to 1,000 meters in depth and has light levels similar to a starry night. Predators in this region tend to have eyes that face upward, like the hatchetfish and cockeyed squid; this is better for scanning the water above for silhouettes of potential prey.

But to veil their silhouettes, many of the twilight zone’s animals have evolved to become transparent. It’s helpful to be transparent in shallower waters too, of course. Take the anemone shrimp, which lives in waters shallower than 20 meters deep and is so transparent you could read a book through its body.

But in the ocean’s twilight zone, transparency has really taken off. “I think you can find transparent representatives from every single animal phyla in the midwater,” says Laura Bagge, a visual ecologist at Torch Technologies who works as a contractor for the U.S. Department of Defense.

When light hits something, there are four potential outcomes: The light may bounce backwards, pass through unobstructed, be absorbed or deflect in different directions within the object. This latter pinball effect, which scientists call scattering, occurs when light passes through materials of different densities — say, between muscle and blood. Scattering is why gummy bears glow under bright light, why milk is opaque and why yeasty beer is hazy.

For animals to become see-through, their greatest challenge is to minimize these changes in density within their bodies. “That’s really difficult to achieve,” says Lydia Mathger, a sensory biologist at the Marine Biological Laboratory.

But some creatures have optical tricks up their sleeves. Animals with simple body plans like jellyfish can make themselves as homogenous as possible; others flatten themselves so light doesn’t have to travel far through their bodies. Of this type, small animals can become transparent more easily. “If you stretch anything thin enough — even metal — it will become transparent,” Bagge says.

Though not all animals have the luxury of becoming a homogenous lump. Crustaceans, for instance, have complex body plans involving diverse organs and tissues. To become see-through, some crustaceans “smush all their organs into one area,” Bagge says, like their head. That clears space in the rest of the body to become transparent.

A crystal-clear body isn’t exactly a checkmate on open ocean predators. To counter the transparent tactic, many predators have turned to bioluminescence. These voracious animals, like the threadfin dragonfish, cast searchlights through nearby waters. As it turns out, transparent animals still reflect light from bioluminescence, which causes them to shimmer like a wineglass.

Some transparent amphipods in turn counterpunch bioluminescence using what Bagge calls an “invisibility cloak.” At least seven such species coat themselves in an anti-reflective coating consisting of tiny spheres. Scientists suspect that these are filled with symbiotic bacteria that reduce reflections, which some researchers have likened to hanging a shag rug in a room to absorb sound.

“They’re so clear and so glasslike that you can’t even see them at all,” Bagge says. That’s quite a feat for an animal the size of an adult hand.

One of the largest amphipods, Cystisoma, takes its camouflage one step further: It supplements the spheres by covering its legs with tiny pyramids. The protrusion-filled patina minimizes reflections from the animal’s exoskeleton, similar to how jagged foam absorbs sound in a recording studio. The combination of spheres and pyramids ensures that the animal only reflects 0.1 percent of incoming light.

The Best of Both Worlds

At least two species of midwater cephalopods — an octopus known as Japetella heathi and the common clubhook squid, Onychoteuthis banksia — take a different approach to countering bioluminescence: by changing colors. Under ambient light, they are transparent. But under the blueish glow typical of bioluminescence, they transform into a rusty brown.

“The instant the brain sends the signal [...] the animal will just end up being pigmented,” says Mathger. “It’s a pretty fast system.”

Yet they don’t change colors in response to red light or other generic visual threats like human movement. This suggests that the color change is an adaptive response to conceal themselves from bioluminescent predators.

Scientists are just scratching the surface of animal transparency. Some researchers suggest that there are at least a million undescribed species living in the ocean’s twilight zone. Discovering how these animals become transparent could provide bioinspiration for engineers inventing cutting-edge, see-through devices.

How the Age of Reptiles Began 250 Million Years Ago

A Leading Theory Behind Neanderthal Extinction May Surprise You