Sea Turtles Use Shipwrecks As Artificial Reefs, And We Know This From Instagram

Social media photos show that shipwrecks can serve as artificial reefs for sea turtles and other marine life — so long as human divers aren’t too bothersome. 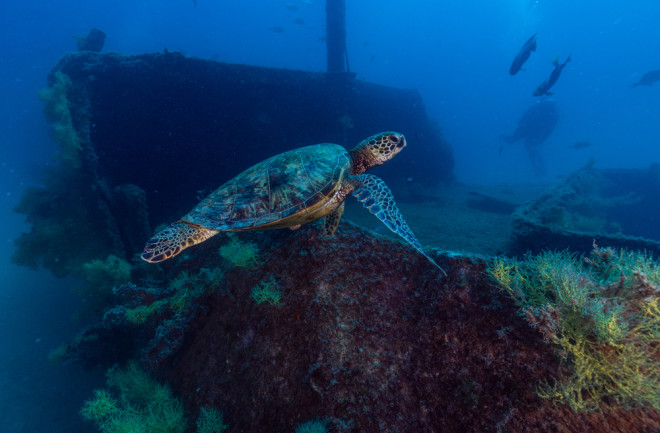 It sounds like the recipe for a viral Instagram post: a swimsuit, a shipwreck and sea turtles. But a team of researchers studying the interactions between divers and marine life are learning that social media may be more useful than inflating your online ego. The scientists are using Instagram posts to survey sea turtle populations, while also learning about the way that divers behave around them. In a study published recently in the journal Animal Conservation, the team suggests that Instagram could be a useful tool for other scientists hoping to learn how sea turtles interact with shipwrecks.

A Wreck of a Study?

Alana Leitão, a PhD student at the Federal University of Pernambuco, had initially planned to do dive surveys of sea turtles at the shipwrecks that dotted the coast of Pernambuco, a state in the northeast of Brazil. But the COVID-19 pandemic left her studies landlocked for a period.

Momentarily at a loss, Leitão turned to social media, where tourists and other recreational divers regularly post a treasure trove of sea turtle photos (as well as pics of other marine life) they encountered while scuba diving. The azure waters off the coast of Pernambuco may seem picturesque, but they hide at least 111 shipwrecks. These sunken vessels represent nearly half a millennium of failed voyages and scuttled wrecks going back to the 1500s, says Leitão.

Given their history, wrecks are popular places for scuba diving. These structures can also play the role of artificial reefs, giving corals and sponges structures to lodge onto in areas where the seabed is otherwise covered in sand. Corals and sponges then attract fish and other marine life. Sea turtles sometimes feed directly on the sponges, or on the other organisms that live off or use the reefs.

In the recent study, Leitão and her colleagues examined Instagram posts between October 2010 and April 2020 that contained images or video footage of sea turtles. They used the geotagged locations to determine which shipwrecks the posts were from. They also identified the species of turtles, and the numbers of photos found at each wreck.

The scientists also observed multiple turtles using wrecks at the same time, both male and female. Bruna Bezerra, a biologist and Leitão’s supervisor at the Federal University of Pernambuco, says that the researchers found more photos of turtles using the better-preserved wrecks than the more poorly preserved ones — possibly because the former is closer to a natural reef in terms of structure. “They use the reefs for resting and for feeding,” Bezerra says.

Hawkbills, for example, mostly eat sponges, while green sea turtles subsist mostly on algae. Loggerheads, Leitão says, mostly eat crustaceans — creatures that often gather around reefs and wrecks. They also found that juvenile turtles seemed to use the reefs more than adults, which may be because the wrecks offered places for them to hide from potential predators.

While the Instagram posts provided some evidence of the ways that turtles use shipwrecks, they also revealed the negative ways that humans sometimes interact with them. The social media posts the researchers surveyed showed several examples of harmful human-turtle interactions — everything from people chasing the animals around in the water to touching them. Sometimes, the turtles were visually stressed, Leitão says.

Luckily, these types of interactions didn’t appear often in the posts. Most interactions were minor, like people posing near turtles. This shows that diving companies are likely instructing tourists on the proper way to treat marine life at wrecks, Bezerra says. Just the same, “the fact that there are major [harmful interactions] is worrying, even though they are a small portion of the interactions we observed.”

Over-visitation could be a problem for turtles at some shipwrecks if local regulations don’t put a cap on daily visitors. “We need to get some preservation of these artificial reefs,” Bezerra says.

Now that pandemic restrictions have loosened, Leitão is now back in the water to learn more about the ways that turtles interact with other species around Pernambuco’s wrecks. But Instagram still holds a wealth of information about marine life around wrecks that has yet to be analyzed, she adds.