The parasite Toxoplasma gondii can influence some animals to become bold and risky, leading Yellowstone wolves into risky territory. 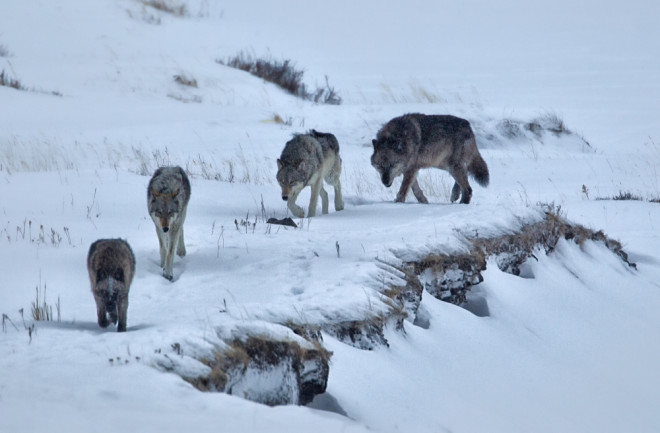 The lives of Yellowstone wolves are marred by risk. Between poaching and surviving the rugged terrain of Yellowstone National Park, the gray wolf (Canis lupus) walks the delicate line between life and death.

And a recent study published in Communications Biology indicates that a parasite could be putting wolves' lives at more risk — but not in the way you may think. According to the study, wolves infected with the parasite are 46 times more likely to become pack leaders versus uninfected wolves.

Researchers from the University of Montana and the Yellowstone Center for Resources have found that wolves infected with the parasite Toxoplasma gondii tend to have higher risk-taking behaviors.

The parasite causes toxoplasmosis, a disease that can infect almost all warm-blooded animals — mostly feline species ranging from domestic house cats to big cats such as cougars. While it may not have overall adverse effects on fit and healthy wolves, it may be fatal to young pups and the immunosuppressed, according to a press release.

According to the study, cougars (Puma concolor) in Yellowstone National Park are known to carry T. gondii. After analyzing blood samples collected from 229 anesthetized wolves and 26 years (1995 to 2020) of behavioral and distribution data, the study authors found that the parasite was more likely to infect wolves living in an area with a higher cougar population. This indicates that wolves may become infected with T. gondii by coming into contact with cougars or simply by being in their environment.

(Credit: Kira Cassidy) Schematic of results from both the demographic and the behaviour analysis. Displayed at the top are three sample packs with different cougar overlap categories and their corresponding predicted probabilities of T. gondii infection (seronegative in black; seropositive in red) based on the best-fit demographic model. Red-filled wolves indicate the expected percent of infected wolves out of 100%. Cougar density ≥1.8/100km2 is depicted with hatch-marks. Cougar density below 1.8/100km2 is all the area outside of the hatch-marks. At the bottom are the predicted probabilities with 95% confidence intervals (gray lines) based on the best-fit behaviour models, of two risky behaviours: dispersing and becoming a pack leader for seronegative and seropositive wolves at 24.9 months monitored (the average number of months wolves in this study were monitored).

Members of the Junction Butte Wolf pack pass by a trail camera. This video displays the slight differences that can be observed in wolf behavior between individuals.

A previous study from Nature Communications suggests that T. gondii-infected animals such as hyenas and rats saw an increase in boldness and testosterone production. Researchers therefore believe that these risky behaviors could be displayed in infected Yellowstone wolves. Infected wolves could lead their packs into high-risk areas that overlap with cougars and other large predators. According to the study, this could potentially increase the risk of infection in uninfected wolves and create a feedback loop, leading to more risky behavior in the future.