Nuclear Warfare’s Past, Present and Future

A glimpse at how nuclear warfare has been a part of our history and how it could transform the future of our planet. 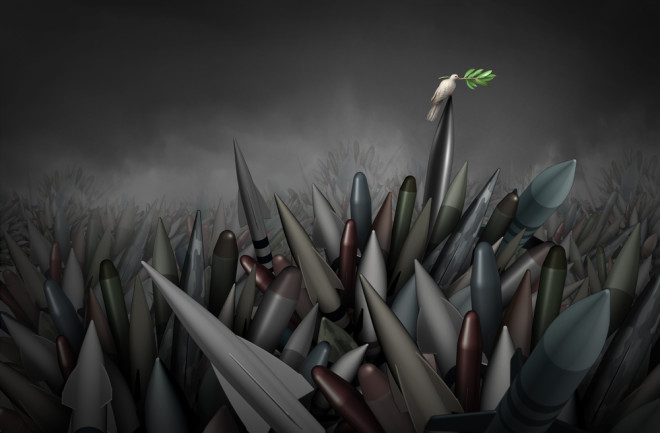 With fear of nuclear war on the rise amid the ongoing Russia-Ukraine war, it’s hard to overlook our complicated past with nuclear weapons and their potentially disastrous effects on our planet. To no one's surprise, the United Nations Office for Disarmament Affairs has declared nuclear weapons as the most dangerous type of weapon on the planet, with power to take the lives of millions and destroy everything in its path.

Will our planet survive a nuclear crisis? Here’s a look at what happened the last time we resorted to nuclear weapons.

The first time humans resorted to nuclear forces was during the end of World War II. In 1945, the U.S. detonated atomic bombs over the Japanese cities of Hiroshima and Nagasaki. The results shocked the world, with an estimated 70,000 to 135,000 people dead in Hiroshima and 60,000 to 80,000 people killed in Nagasaki. And the fatal effects of the bombs didn’t end with their detonation. In the years that followed, catastrophic health effects such as cancer due to long-term exposure to radiation haunted the cities. Research showed that increased miscarriages and deaths became commonplace for pregnant woman exposed to the bombings. The consequences even followed generations, with an increased risk of intellectual disabilities and impaired growth among children of blast survivors.

The atomic bombs, composed of the radioactive elements uranium and plutonium, not only took thousands of lives but also absolutely devastated Hiroshima and Nagasaki. Research shows that energy released during the explosion from both bombs led to immediate large-scale firestorms. Environmental contamination also remained a huge concern as water, air and soil were contaminated in the cities and surrounding areas due to the large amounts of radiation emitted from the bombs and carried by winds. Black rain containing radioactive particles fell from the sky and damaged infrastructure. These detrimental effects left the cities in shambles for years as Japan tried to restore the lasting damage from the bombs.

Despite these consequences, some of which are still felt today, we find ourselves in yet another predicament over nuclear weapons. On February 24, Russia sent its army across the border to Ukraine in an attempt to take over the country by force. The invasion has led to a full-blown war between Russia and Ukraine and rallying support from Ukraine’s Western allies including the U.S. However, with the conflict escalating each day, Russian President Vladimir Putin recently threatened the use of nuclear forces in Ukraine. The possibility of history repeating itself in the form of another nuclear assault, even a limited one, naturally fills people around the world filled with fear and anxiety.

A Planet on Fire

How might a nuclear war in the present day unfold and what could be its consequences? Before we answer that, consider that the world’s combined nuclear arsenal stands at approximately 13,000 such weapons in the world, with over 90 percent of these weapons belonging to the U.S. and Russia. What’s even more dangerous is that modern-day nuclear weapons are far more powerful than the devices used in the Hiroshima and Nagasaki bombings, explains Brian Toon, a professor of atmospheric and oceanic sciences at the University of Colorado. Nuclear weapons unleash or exert enormous amounts of explosive force, which can be quantifiably measured through kilotons. Scientific experts have calculated that each of the atomic bombs dropped on the Japanese cities released between 15 to 25 kilotons of energy. Today, just one of the nuclear weapons at our disposal could release 10 times that explosive energy. Or more. Much more.

Hydrogen bombs, for example, are far more dangerous than the atomic bombs of World War II. In fact, hydrogen bombs can be 1,000 times more powerful than atomic bombs. This would mean a bigger explosion and an even greater number of deaths. While the specifics are dependent on factors like the locations of where a bomb is dropped and the population density of the area, one dreads to imagine the destruction modern-day nuclear weapons could cause. “The purpose of nuclear weapons is to destroy cities, that’s what they are built to do,” says Toon.

Movies and books have long depicted nuclear warfare as inevitably resulting in an uninhabitable planet with destroyed cities, collapsed infrastructure, scarce food and water and lethal amounts of radiation. This may not be far from the truth as depicted by Toon and a team of researchers in a study that maps out the results of even a small nuclear crisis. The study explores the idea of a nuclear war between India and Pakistan, two countries with a history of rivalry and access to smaller-scale nuclear weapons. The hypothetical crisis involves the two countries setting off more than 100 Hiroshima-sized nuclear weapons that could lead to anywhere between 50 to 125 million deaths. And the damage wouldn’t end there.

The study indicates that such a conflict could lead to giant firestorms that would spread across both urban and industrial zones and result in unprecedented global shortages and starvation that would haunt the world for more than a decade. If that’s not enough to scare you, it is predicted that the firestorms could also launch large amounts of soot into the stratosphere. This could lead to the decline of global temperatures between 2 to 5 degrees Celsius (35.6 to 41 degrees Fahrenheit).

The results of the study provide a glimpse at the devastating effects even a small-scale nuclear war could have on our planet. With Russia’s threat of using nuclear forces, it’s scary to draw parallels to how this scenario might play out today. Any nuclear conflict would completely transform the world as we know it, and not for the better. Which is why the nuclear-capable countries of the world have managed to resist deploying such ultimate force against one another for the past 75+ years — and why we all hope such restraint continues.