The largest volcano on the planet has decided to wake from its slumber. Mauna Loa started erupting last night with a new fissure vent at the volcano's summit. 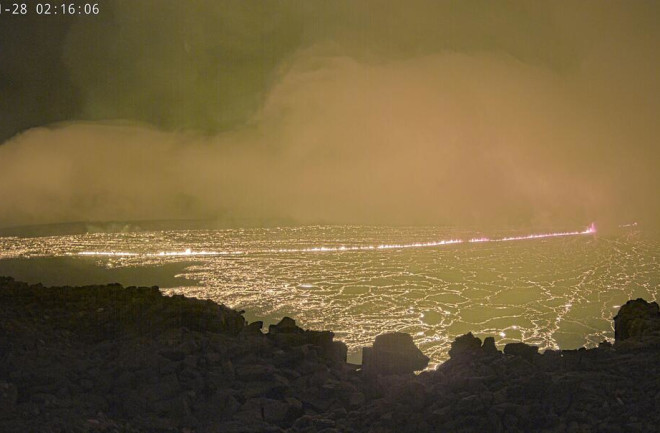 The new eruption at Mauna Loa in Hawai'i seen at 2:16 AM local time, about 3 hours after the activity started. Credit: USGS/HVO

Mauna Loa started erupting at its Moku‘āweoweo summit caldera in the early morning hours today. Located on the big island of Hawai'i, the massive shield volcano hasn't been active in 38 years. The eruption is following the profile of most Hawaiian-style eruptions, with a fissure opening at the summit with lava fountains and lava flows moving out from the new vent (see above).

The USGS Hawaiian Volcano Observatory moved the alert status for Mauna Loa to Red/Warning thanks to this new activity. Right now there is no threat to the people living around the volcano as this eruption is likely to remain confined to the summit. However, views from the summit rim show lava flows coating the floor quickly (see above).

UPDATE 11:30 am ET: The USGS is reporting that lava flows have spilled out of the summit caldera to the southwest, but the eruption is still coming from the summit.

Animated GIF of the activity at Mauna Loa across November 27 and early November 28, showing the start of the new eruption. Credit: USGS/HVO.

However, it is not out of the question that new vents could open outside the summit caldera. The historic lava flows at Mauna Loa have occurred on all sides of the giant volcano, including some in the 1880s that reached what is now Hilo. It also has the potential to produce flows that could reach South Kona on the other side of the island. So, the threat is there for potential lava flows that could reach to the southwest, northeast and northwest of Mauna Loa. Depending on how vigorous the eruption is, volcanic fog (or vog) might be a respiratory hazard as well.

UPDATE 2:30 pm ET: It does appear that fissures have opened on the Northeast Rift of Mauna Loa outside the caldera (see below), but the threat to communities is still low according to the USGS. Activity at the summit appears to have waned as well. Also, flights in/out of Hilo have been impacted by the activity as well.

Lava flows on the NE Rift of Mauna Loa from the November 28, 2022 eruption. Credit: USGS/HVO.

As the map of lava flows from the past 200 years suggests, Mauna Loa is a very active volcano. This almost-40-year gap in eruptions is relatively rare in its modern history. There have been signs over the past few months that an eruption was in the works, with heightened earthquake activity within the volcano. It does look like there was little in the way of deformation at the summit until right before the new eruption began.

Lava flows from Mauna Loa over the past ~200 years. Credit: USGS/HVO.

The new eruption means that both Mauna Loa and Kīlauea are erupting on the big island. Dual eruptions isn't uncommon in Hawai'i, although there is some suggestion over the last 1,000 years that the two volcanoes may alternate activity. Both volcanoes were erupting in 1975 and 1984, but since mid-1980s has only been Kīlauea erupting.

Both volcanoes are ultimately fed by the hotspot beneath Hawai'i - a plume of hot mantle that rises up from deep within the planet and melts as it reaches the base of the ocean crust miles beneath the island. Although both volcanoes are caused by this mantle plume, the trace element and isotopic composition of the lava erupted from Mauna Loa and Kīlauea are distinct enough that geologists who study Hawaiian volcanoes think that they might be fed from distinct parts of the plume.

The glow of the new eruption seen at the summit of Mauna Loa from Middle Part of Mauna Loa's Southwest Rift Zone. Credit: USGS/HVO.

HVO has a number of webcams pointed at the summit of Mauna Loa that show the current activity, including a thermal camera that can pierce some of the fog that collects at the over 12,000 foot summit of the volcano. Right now, this eruption is the best of all worlds: lava flows confined to the caldera of a volcano that is being watched closely. This means it is a great chance to watch an eruption and know that people should be out of harm's way.

From Earth Art to Extreme Weather: The Home Planet as Seen From Space in 2022, Part 1