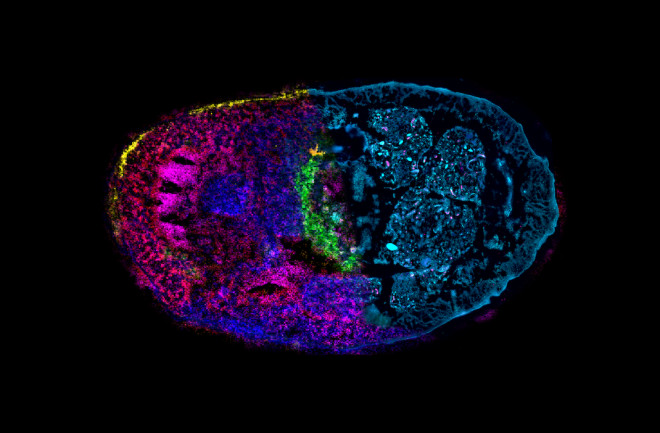 The jewel-like tones in this image reveal the rich interior life of an earthworm — and not just metaphorically speaking. Worms play host to a legion of symbiotic microbes and parasites, which leave behind distinct molecular fingerprints. This past July, researchers at the Max Planck Institute for Marine Microbiology in Germany combined two different imaging methods to look at how those molecular signals are distributed throughout a worm’s body. The vibrant colors in the top half of this cross-section represent different metabolites — small molecules that regulate functions such as immune responses — in the worm’s tissue, while the bottom shows the underlying tissue structure. Together, these imaging techniques reveal the interplay between the worm and its parasites on a molecular level, and could shed light on symbiotic interactions inside other small invertebrates, such as deep-sea mussels.

What Happens When Scientists Put a Human Intelligence Gene Into a Monkey?

Genetically Modified Mosquitoes May Protect The World From Disease