How The National Park Service Is Working To Prevent Wildfires

Wildfires are detrimental to our planet, the NPS is using new tools to stop the blaze before it even starts. 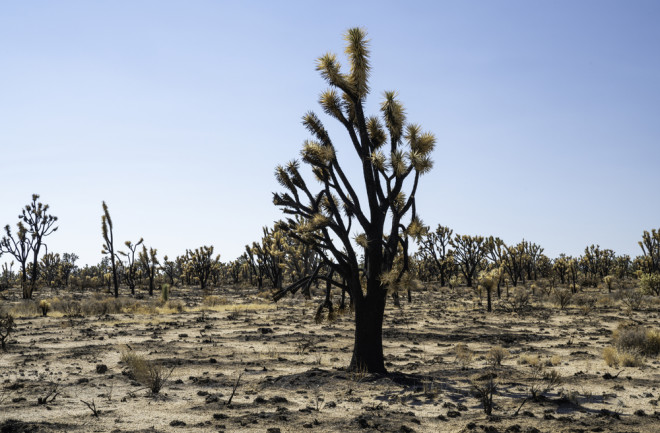 The Joshua tree is a symbol of the Mojave Desert. After all, it only grows in this region of the world. It's unique, picturesque, bizarre, resilient and a yucca, which means it's a member of the asparagus family!

However, on August 16, 2020, lightning ignited the area around Cima Dome, a volcanic formation in the Mojave, the same day that six other California wildfires started. This included the August Complex Fire — California's largest recorded fire. With the state's firefighting resources battling various blazes across California, over 43,000 acres and an estimated 1.3 million Joshua trees burned in the Mojave National Preserve. It was a devastating loss.

Now, charred Joshua trees stand beneath the dry California sky. What was once a lush forest of unique desert flora in the Mojave National Preserve is now a haunting, vacant graveyard of blackened sand and skeletal trees. Could this fire have been prevented?

Wildfires are a tricky thing, especially within the National Parks. While they are brutal and destructive, they are also vital to the growth and survival of certain ecosystems. The National Park Service (NPS) has been working diligently to find modern ways to manage wildfires, and most importantly prevent human-caused wildfires from damaging natural wonders.

Humans and natural phenomena cause wildfires, according to Tina Boehle, a communications officer with NPS Division of Fire and Aviation Management.

Weather events like storms can contribute to wildfires in multiple ways. In places like Florida, hurricanes can leave behind dead trees, branches and other vegetation that can easily fuel a wildfire. And a single bolt of lightning can set off a massive blaze, like the one on Cima Dome.

Humans, according to Boehle, caused 85 percent of the wildfires between 2000 and 2017. They can occur in a variety of ways. People have sparked blazes by tossing still-glowing cigarette butts out car windows, lighting fireworks when and where they aren’t allowed, emitting sparks from overheated vehicles, dragging chains behind a vehicle and ignoring guidelines for campfires. Along with that, climate change, invasive species and even overgrazing can contribute to wildfires.

"Grasses can form an avenue for fire to spread," says Bruce Baldwin, a professor of Integrative Biology at the University of California, Berkeley. In the Mojave National Preserve, Red Brome, an invasive grass, was one of the factors that allowed the fire to spread quickly over Cima Dome.

European settlers and explorers introduced many invasive grasses, though most likely not intentionally, says Baldwin. Eventually, when cattle ranches became more prominent out West and cattle over-grazed the native vegetation, invasive species took over. Invasive grasses like buffelgrass in Saguaro National Park have changed the way fire interacts with the landscape.

"The grasses create a continuous bed of fuel instead of interspersed vegetation," says Boehle.

While invasive grasses do influence the spread of fire, Baldwin says it is not fair for the grasses to take all the blame. Especially in the case of the Dome fire, heat was also a culprit.

"There was an unprecedented heat spell right before the fire on Cima Dome," says Baldwin. "Thirteen days at over 100 degrees Fahrenheit, never recorded before, so conditions were definitely unusual."

The effects of climate change were felt that summer in California, as the state was once again suffering a massive drought. Droughts dry out the landscape, kill off vegetation that becomes fuel for fires and decrease the water supply that could potentially extinguish a fire.

Boehle and her team have accepted that "fire season" is a term of the past.

"Not only in parks, but all across the country, we’ve seen the typical fire season extended by a couple of months. We no longer call it a fire season, but rather [use] the term fire year," she says. "We’ve seen larger fires and more extreme fire behavior in fires across the country and believe that climate change is a factor in addition to an unnatural build-up of fuels."

When a wildfire ignites, NPS along with the U.S. Department of Agriculture Forest Service, the Bureau of Land Management, the Bureau of Indian Affairs, U.S. Fish and Wildlife Service, Tribes, state and local agencies work together to put the fire out. They use  aircrafts to drop water or retardant on unburnt areas. They track the blaze using remotely-piloted aircrafts, satellites and GPS. Overall, Boehle says it's the weather and the firefighters on the ground that have the most impact.

(Credit:Elizabeth A.Cummings/Shutterstock) An airplane dropping fire retardant to prevent the spread of a wildfire.

The best way to control a wildfire is to make sure one doesn’t happen in the first place. Prevention is key to ensuring that people, plants, animals, ecosystems and structures stay safe. NPS uses several prevention methods, according to Boehle, including what is known as the "Three E’s" and the "A": Education, Engineering, Enforcement and Administration.

The NPS currently uses the most common prevention method of prescribed burns, or purposely burning an area that could easily fuel a wildfire. This method works well in parks like the Everglades National Park. The lightning capital of the U.S. is Florida, according to Riki Hoopes, a fire prevention and communication specialist for the NPS in South Florida. Though it seems odd, the Sawgrass and other grasses like it in Everglades National Park dry quickly after rain and when lightning strikes, they easily catch fire.

"Fires holdover," Hoopes says, "and then burn over the water on the ground."

According to Hoopes, a wildfire can be as small as a kitchen table or range to thousands of acres. If a fire is going to happen, one of the best ways to fight it is to find the safest place to hold it back. Having prescribed burned patches helps limit the spread of wildfires.

A new tool recently introduced to the NPS is a computer application called Wildfire Prevention Spatial Assessment and Planning Strategies or WPSAPS (pronounced whip-saps). The program uses spatial analysis and helps users collaborate on prevention plans and analyze ignition risk modeling. This will help track data on ignition risk, fuel hazards, fire occurrence and area value, easily for all regions of the country.

Using the collected data, the application will then recommend prevention methods that have helped prevent fires in similar areas. The program is in its first year of roll-out in South Florida parks, but so far Hoopes noted that the app has worked great.

"It's super helpful for knowing where our fires are happening, what’s causing them and tracking what we’re doing prevention-wise," says Hoopes. If it’s successful, the NPS is considering adopting the technology permanently.

There is no way of knowing how many Joshua trees could have been saved if applications like WPSAPS or other firefighting resources had been more readily available the day Cima Dome ignited. Though some wildfires are natural, and necessary for new vegetation to grow, in places like the Mojave National Preserve, the Joshua trees needed a helping hand.

Tiên Nguyễn, a journalist and filmmaker, captured the volunteer efforts in December of 2021 to plant Joshua trees to help replenish the Cima Dome area. Volunteers poured in to help save this iconic tree. Someone even brought a camel to help move supplies.

"The one thing we weren’t prepared for," Nguyễn says, "was the freezing rain." After a few days, the volunteer crew was forced to stop their replanting efforts. "At first it was really tough to hear," says Nguyễn. "But, ultimately… That’s sort of the reality. It makes their efforts more poignant. There are so many things going against them, and they’re still trying."

Much like the Joshua trees, the rest of our planet also needs a helping hand. Wildfires can happen anywhere — all it takes are the right conditions. Understanding them is one of the best ways to prevent them. Prevention takes more than modern technology, it takes all of us working together to understand the impact we have on our planet's ecosystems.

From Earth Art to Extreme Weather: The Home Planet as Seen From Space in 2022, Part 1