Atlantis may be fiction, but you can explore these sunken cities — including the so-called Vegas of Ancient Rome, which now hosts mostly fish and the Heracleion of Egypt. 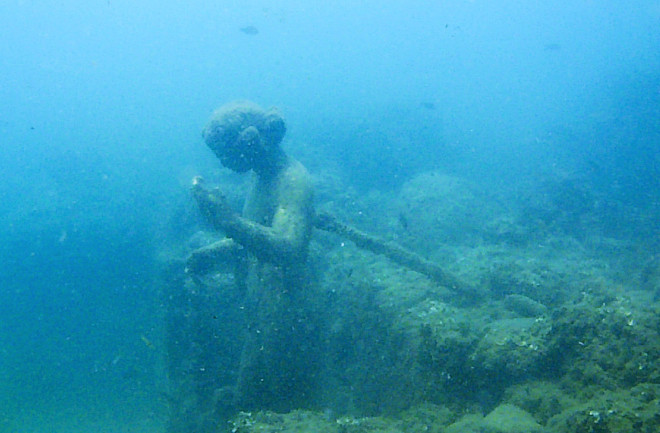 This article was originally published on July 21, 2021.

For thousands of years, humans have whispered and wondered about the possibility of entire cities sinking into the ocean. One of the most famous of these lost metropolises, Atlantis, cropped up in conversation thanks to Plato, who claimed that the city had dropped beneath the waves millennia before he even wrote about it.

While debates over whether Atlantis is real have continued ever since the ancient Greek introduced the idea, underwater buildings, streets and edifices of other ancient cities have revealed themselves to researchers. These sunken homes, businesses and meeting places are as beautiful as they are eerie: They prove that size and importance aren’t enough to keep a thriving community above water.

Pavlopetri is about 5,000 years old and the oldest submerged lost city in the Mediterranean sea. (Credit: PNIKOL/Shutterstock)

In 1967, Nic Flemming, a researcher with the University of Southampton, came across remains sitting several feet below the water off the coast of southern Greece. The finds would pan out to be the oldest submerged city yet found. Streets, courtyards, buildings and gravestones lead up to nearby Pavlopetri island, where the settlement clearly once sat: Ancient walls still line the land. The buildings, researchers think, date to the Mycenaeans — ancient Greeks thriving at the tail end of the Bronze Age from about 1650 to 1180 B.C.

After initial work in the 1960s, the site went relatively unstudied until the early 2000s, when the Pavlopetri Underwater Archaeology Project team dove into the water to see what else could be learned. In the intervening decades, graves had been damaged and disturbed, earning the site a UNESCO designation as a World Monument Watch Site in 2016. Ideally, the label should help protect the ancient city from ships, anchors, pollution and construction.

Once a major port welcoming ships as they entered the Nile’s delta, Heracleion or Thonis — depending on if you’re using the Greek or Egyptian name — supposedly sprung up in the spot where Herakles (or Hercules) first stepped on Egyptian land. Where the hero walked is long gone, as archaeologists think the city has been underwater since the 8th Century.

Researchers using sonar to detect what lies beneath the sea bed have identified dozens of boats and hundreds of anchors, and managed to dredge up incense burners, jewelry and supplies needed for temple worship. Even 18-foot granite statues of Egyptian gods have come up out of the water. Though researchers are still learning more about what Heracleion and the neighboring city of Canopus held, archaeologists and geologists have an idea of why the two bustling centers sank. The ground both were built on held a lot of clay, and tidal flooding or earthquakes — both of which happened in the area — could compress the soil and shift it fast, allowing the heavy stone buildings to slowly slide into the water.

A statue of a boy located off the coast of Baiae, Italy. (Credit: Holly Lewis/Shutterstock)

In a way, you can still act like an ancient Roman and take a trip to Baiae. But where the former travelers hit the city for a soak in its baths, you’ll have to dip into the ocean to see the old spa resort.

Baiae drew the wealthiest visitors to the coast for the 2,000 years the city had operated. Several emperors added palaces and pools, while at least one Roman philosopher warned others of the gossip, drunken beach wanderers and loud sailing parties other visitors had to contend with. The giant party eventually came to an end: Activity beneath the Earth’s crust in the region moves the land up and down, and the undulations eventually put part of Baiae underwater. Remains that dodged the aquatic fate as well as those bathing in the Gulf of Naples are open to tourists. As part of broader efforts in Italy to preserve underwater archaeology and open a Virtual Museum for the Underwater Archaeology, researchers are working on 3D surveys of two parts of Baiae so dry-land visitors can have a sense of the opulence the former inhabitants enjoyed.

More of a village than a city, the site of Atlit-Yam off the coast of northern Israel still has an impressive amount of material lingering under the water, especially since the site is about 7,500 to 8,000 years old. The nearly 10 acres of remains include house foundations, hearths, tools, flint, animal remains and human graves, dating to a time when our ancestors were just starting to settle down in one place and grow grains. Two individuals buried on the site — likely a woman and her infant — show genetic markings of tuberculosis infections, making them the oldest human tuberculosis patients yet found.

Sea level rise ultimately drove Atlit-Yam residents from their home. At least one well the inhabitants dug is now under more than 50 feet of water, and later Neolithic settlements that are still submerged but closer to shore show how people slowly retreated from the rising tides.