Fish Can Count, Along with Other Animals

Researchers find that counting may be an evolutionary trait that helps fish and animals survive. 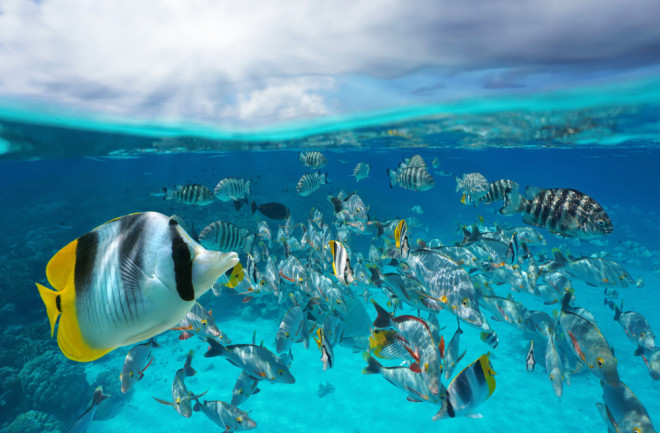 Our ability to count isn’t a distinct human trait. Animals can count, too. And, just like humans, some animals are better at math than others.

For decades, researchers have designed experiments that have helped determine that animals, including insects, can count and what specific animals are mathletes.

This research, conducted on diverse taxonomic groups from primates, to insects, to birds, suggests that animals not only distinguish between more and less, but specific numbers, too. Called numerosity, each new research project unveils more complex counting abilities, says Brian Butterworth, author of Can Fish Count?: What animals reveal about our uniquely mathematical minds.

Butterworth was studying small and large number discrimination in humans when he turned to fish. His research on humans determined that it’s easy to discriminate between numbered dots when there are only a few dots.

It’s a standard test of basic numerical abilities, a metric that correlates with calculation abilities, says Butterworth. He uses discrimination, which is also known as acuity, or dot enumeration efficiency, to measure these abilities.

“What you find, sort of universally for all kinds of dimensions, is what's called a ratio effect, sometimes called Weber's Law, in which the bigger the ratio difference between A and B, whether it's weights, or lights or numbers of dots, the easier it is to make that discrimination. And that was true in the large number domain. It wasn't true in the small number domain, for fish or for humans,” Butterworth says.

Then Butterworth and his colleagues decided to see if some fish were better at counting than others. He’d previously determined that some humans are, indeed better at math than others.

As part of his experiments on humans, Butterworth developed the “Weighted Confidence Sharing Theory” in which humans, making separate decisions, had to determine if there were more blue dots or more yellow dots. If they disagreed, they had to discuss it and come to a joint decision.

This theory suggests that humans, when working together to determine if there are, for example, more blue dots or more yellow dots, will agree with the individual whose shared confidence is higher.

“And so, the question is, was the joint decision better than say the average of the two decisions, the average of the separate decisions that they made? And we found, sure enough, it was,” he says. They wanted to know if fish did this, too. And it turns out, they do.

“What we discovered testing each of [the fish] individually is that there were some fish that were good at making a discrimination. Which side of the tank has more other fish of the same species? And some were not very good and we retested them. And, the bad fish stayed bad and the good fish stayed good. So, we put in a bad fish with a good fish to see what would happen and what happened was that the pair, the dyad, was better than the average of the two,” says Butterworth. “And what we observed to happen was that the bad fish followed the good fish over to the correct side of the tank. So, what we've found is that two heads are better than one.”

Researcher Dr. Vera Schluessel, from the Institute of Zoology at the University of Bonn, who this year published a study showing that cichlids and stingrays can perform simple addition and subtraction, says humans need to stop underestimating other species.

A series of disparate experiments suggest that (a) honeybees count landmarks when looking for nectar, (b) some ants count their steps so they know how far they've gone and can get back to their nest, (c) lions tally the number of roars of another group to decide if they should attack, (d) a species of frog uses numbers in courtship as male frogs increase sounds to compete for a female’s attention, and (e) spiders can assess the number of insects caught in their webs.

Some, including Butterworth, believe that an animal’s ability to count is an evolutionary trait. “An individual fish, let’s call him Freddy Fish, is going to be safer in a large shoal than a small show, because when the predator comes, the predator is less likely to eat Freddy because it's going to eat Freddy’s friends and relatives instead. It's good for him to join the larger shoal. That means he really has to have a way of assessing shoal size and we know from the lab that actually these little fish are quite good at that,” says Butterworth.

Not only can all kinds of animals discern the difference between 10 and 15, but some also seem to understand zero, a concept that even some young human children struggle to compute. It’s also a concept that didn’t enter human societies until around the seventh century, according to the history of mathematics. Our closest relative, the chimpanzee, has a sense of zero, along with honeybees, crows and others.

“Are bigger brains better when it comes to counting? Maybe not. Maybe we can all count about the same unless we've got a symbolic system,” says Butterworth.

This is similar to how humans have developed the written number. What we do know from research, including Butterworth’s own work on stroke victims who have lost their ability to speak but can still do math, is that language and numerical abilities are distinct.

“Bees are very good on number tasks. And they have very tiny brains compared to us. We've got 86 billion neurons. They've got a million nuerons and no cortex, but they have a mechanism that enables them to read the language of the universe,” says Butterworth.

“We're not really sure where in their brains they do it. Ask me in a year and I hope to have an answer to that,” says Butterworth who is teaming up with neuroscientists and molecular geneticists from around the world to study the genetic mechanisms underlying numerical ability.