Dolphins and Whales Apparently Sleep With One Eye Open

Sleep research shows that some marine mammals have the ability to rest half of their brain at a time, skipping a key sleep stage we see in humans. 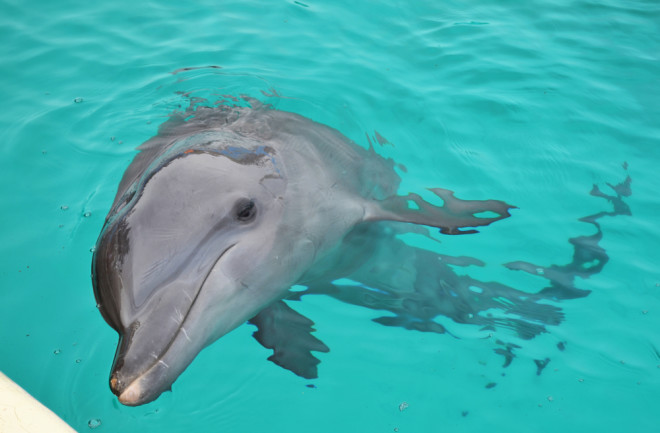 According to a German legend, the water nymph Ondine cursed her human husband after learning that he’d been unfaithful to her. His punishment? His body’s ability to automatically control his breathing was removed, meaning he’d have to stay awake at all times or risk suffocating to death in his sleep. While this is just one version of Ondine’s story, it did lend its name to a rare medical condition that is scarily similar to the fate that befell her adulterous husband. And though the myth is just that — a myth — it does highlight the unavoidable necessity of sleep. Staying awake forever is impossible, even if your life depends on it.

The need for sleep isn’t limited to humans — almost every other animal requires it to some degree, including all mammals. “Sleep in humans in many aspects is very similar to sleep in most terrestrial mammals,” says Oleg Lyamin, a biologist affiliated with the Center for Sleep Research at the University of California, Los Angeles as well as A.N. Severtsov Institute of Ecology and Evolution at the Russian Academy of Sciences in Moscow.

But how does sleep work in aquatic mammals, like whales and dolphins? Considering these cetaceans live in water and regularly surface to breathe in air, it seems they might meet the same breathless fate as Ondine’s husband whenever they settle in for a nap in the sea.

Read More: Animals That Sleep the Least and the Most

To continue breathing while sleeping, many aquatic mammals use what’s called unihemispheric sleep. That is, they sleep while still swimming, resting only one half of their brain at a time, while the other half remains awake. This means dolphins literally sleep with one eye open.

This method, which differs significantly from how humans sleep, hinges on the varied sleep stages exhibited in cetaceans and us Homo sapiens. “Sleep in most land mammals consists of two stages, slow-wave sleep and REM [rapid eye movement] sleep,” says Lyamin. “Cetaceans appear to display only one sleep stage, which is slow-wave sleep.”

Given the known importance of REM sleep in humans, it’s startling that cetaceans don’t seem to do it at all. These myriad dissimilarities between unihemispheric sleep and sleep as we know it has led some to conclude that unihemispheric sleep isn’t really sleep at all, Lyamin says.

Gaining this knowledge has required creativity and advances in technology to study large sleeping and swimming animals in the water. “Technologically it’s quite difficult.” Lyamin says. While this type of sleep monitoring in the wild has mostly failed, to date, researchers have successfully carried out studies in captivity.

Several techniques have been developed since unihemispheric sleep was first discovered in dolphins by Russian biologist Lev Mukhametov. For starters, brain activity can be monitored using an electroencephalogram (EEG), which traditionally is hooked up to a data recorder using cables. Nowadays, researchers can surgically implant devices that record data and remove them later, such as in a 2018 study with fur seals. “It’s an invasive procedure,” says Lyamin, but the animals make a full recovery.

“I think it can be done in the near future,” says Lyamin.

Beyond dolphins and whales, some research has also probed how sleep works in mammals that split their time between land and sea, such as seals. Simply enough, these creatures “completely switch from land type of sleep to aquatic type of sleep,” says Lyamin. While on land, fur seals display REM sleep similar to other terrestrial mammals; once they’re spending the majority of their time in water during their winter migration, however, they rely solely on slow-wave unihemispheric sleep.

While many scientists became interested in cetacean sleep out of sheer curiosity, the research does have practical implications for humans too. “Studying sleep definitely allows us not only to satisfy our curiosity,” says Lyamin, “but allows us to think about how to help humans.”

For example, studying how dolphins are able to move while sleeping — normally a state when muscle activity is inhibited — could prove useful for understanding paralysis in humans. And given their shifting sleep status, understanding more about seal slumber could be fruitful in this area, too.

“We have to talk more about unihemispheric waking,” Lyamin says. “It allows motion, and it allows vigilance. The waking hemisphere is responsible for doing both [during sleep].”

More From Discover
Health
Walking vs. Running Benefits: Should You Walk or Run for Exercise?
Health
What is the Purpose of Hiccuping?
Mind
Gut Bacteria's Role in Anxiety and Depression: It’s Not Just In Your Head
The Sciences
This 2,300-Year-Old Mummy Has a Heart (and Tongue) of Gold
Mind
Can Playing Video Games Make You Smarter?
Health
Is Vitamin C Actually an Effective Cold Remedy?
Recommendations From Our Store
My Science ShopDiscover STEM Kits
My Science ShopDiscover 2022 Calendar
My Science ShopStrange Science
My Science ShopElements Flashcards
Shop Now
Stay Curious
Join
Our List