Although Jordan is famous for its impressive archeological sites, paleontology has not enjoyed the same popularity. 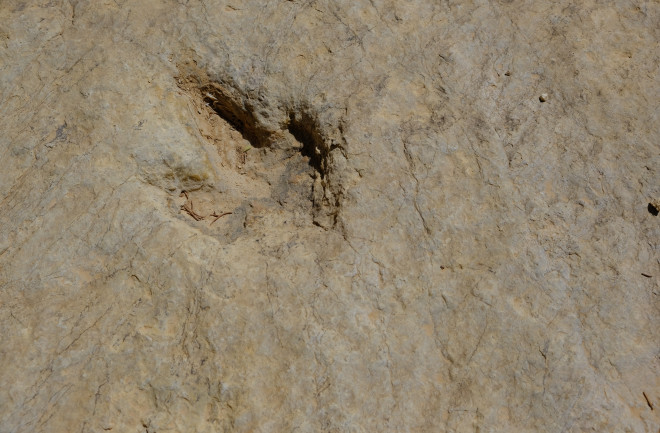 Some 100 million years ago, dinosaurs roamed the coast of the Tethys, an ancient ocean that covered most of the modern-day Middle East. Recently, dozens of their footprints have been found on the mountain of Safaha. In 2019, two Polish doctors stumbled across three-toed footprints while hiking between Shobak and the ancient city of Petra in the south of Jordan.

A few months later, a team of German, Polish and Jordanian scientists surveyed the site, on the arid mountain, to document the tracks.

“We found large trackways of several small- to medium-sized theropods, and also a few ornithopod footprints and one sauropod print,” says Henrik Klein, an ichnologist and paleontologist at the Palaeontological Museum in Germany. He participated in the expedition alongside Gerard Gierliński, a paleontologist at the University of Warsaw, and Abdalla Abu Hamad, a geology professor at the University of Jordan.

They discovered the prints in the marginal marine deposits of the Na’ur Formation, which consists of well-bedded limestones, dolomites and marls with abundant marine fossils. The three species identified — the predatory theropod, the grazing ornithopod, and the long-necked, herbivorous sauropod — indicate the area had a flourishing ecosystem.

“It’s the first really diverse dinosaur footprint fauna in the region,” says Klein. “The footprints we found are quite small, but they are remarkably well preserved. It’s really excellent material, and it’s very rare in the Middle East.”

Even though dinosaur footsteps can be found in numerous places around the world, very few have been documented in the Middle East — since much of what is now land was then covered by the sea. The first dinosaur footprint in the region was discovered in 1962 in Jerusalem. In 2008, dinosaur tracks from the Upper Jurassic were found in Yemen; more recently, a few dinosaur footprints were spotted in Lebanon and Egypt.

In Jordan, most of the fossils found so far are marine invertebrate fossils, such as bivalves, ammonites and foraminifers. But scientists say there’s a lot of potential for other fossil discoveries: “We need more studies on dinosaur footprints in Jordan. I’m quite sure we will find more footprints in the area, but we need more systematic exploration,” says Klein.

The scientists took 3D images of the trackways near Shobak, though pandemic restrictions delayed travel plans to conduct more research in 2020 and 2021. Klein and his team published a preliminary study in Annales Societatis Geologorum Poloniae in 2020, but he says further studies are needed.

“The footprints in Jordan are an amazing discovery,” says Hesham Sallam, an Egyptian paleontologist who was not involved in the research. He says the findings could help find answers about the history of the planet and be crucial to expanding what is known about the late Cretaceous period in a region that remains one of the most under-explored on the world’s fossil map.

Although Jordan is famous for its impressive archeological sites, paleontology has not enjoyed the same popularity. “The problem is a lack of local scientists specialized in paleontology,” says Sallam, who was the first in Egypt to specialize in vertebrate paleontology. “It’s important to have a local scientist community working in the region.”

Despite being hampered by a lack of funds, few research facilities and regional turmoil, however, paleontology is gaining some traction in the Middle East, with important discoveries being announced in recent years.

“When we found a dinosaur in Mansoura in 2013, it was much easier to attract funding,” says Sallam, who is now training the next generation of paleontologists at the Mansoura University Vertebrate Paleontology Center, an institution he founded in Egypt in 2010.

In Jordan, there is still no paleontology department and no institution protecting resources beyond human history — yet some Jordanians are determined to raise awareness of the importance and value of local paleontological resources.

The Need for Protection

Omar Fasheh, a Jordanian amateur paleontologist, came across Klein’s study only recently, two years after its publication. To bring more attention to it, he decided to look for the dinosaur tracks himself.

“I’m very passionate about fossils, so when I read about the footprints, I wanted to see them,” says Fasheh. “With my friend Mohammad Asfour, we visited the site and tried to reach out to officials and institutions to see what could be done to protect it.”

Scientists and enthusiasts hope the dinosaur footsteps will continue to pave the way for more interest in paleontology in the region, exposing more people to the field and building up local resources. “The entire area is very important, so it should be turned into a reserve,” says Asfour, a fossil enthusiast.

But for that to happen, the site must be protected from damage and theft. Mining projects in nearby Dana, Jordan’s largest nature reserve, for example, threaten the region’s natural and historical wealth.

“Most of the resources go to mineral exploration,” explains Ikhlas Alhejoj, an associate professor of geology at the University of Jordan. “There are a lot of people interested in the region’s gold, copper and manganese. But the fossils we have are a real treasure […] treasures that are not just important for Jordanians, but for the entire world.”

Alhejoj, who participated in the recent study near Shobak, agrees the site should be protected: “We need further studies and we need to preserve our natural heritage for future generations,” she says.