In celebration of Indigenous Peoples' Day, we take a look at the framers of the Constitution - who may have taken inspiration from the age-old traditions of the Haudenosaunee. 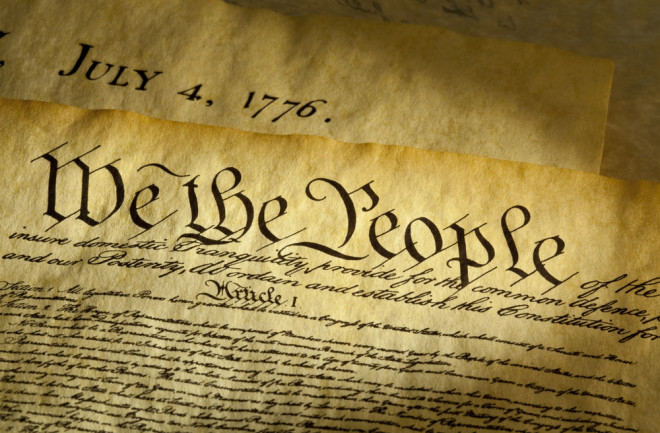 This article was originally published on July 4, 2021.

The United States of America traces its political roots to the Declaration of Independence in 1776, but by then, democracy was old news in the so-called “New World.” During the American Revolution, thousands of Native Americans already lived under a system of governance that embodied many of the same ideals espoused in Philadelphia at the time.

As the founding fathers began crafting a more perfect union from scratch, the Haudenosaunee Confederacy of what is now upstate New York carried on with the one it had been perfecting for centuries, grounded in an oral constitution known as the Great Law of Peace. Dating to perhaps as early as 1142, this charter is based on notions of unity, liberty and equality. It even provides for the separation of powers and outlines impeachment procedures. Is it a coincidence that American democracy emerged in a land so long imbued with such principles?

Some scholars see these similarities to the U.S. Constitution as evidence that the Haudenosaunee — more commonly, but improperly, called the Iroquois — helped to mold the nascent American nation. Two hundred years later, in 1988, Congress itself passed a resolution acknowledging as much. "The confederation of the original 13 colonies into one republic was inﬂuenced by the political system developed by the Iroquois Confederacy,” it reads, “as were many of the democratic principles which were incorporated into the Constitution itself."

If true — some historians disagree — then modern Americans owe a debt not only to democratic Greece and Rome and Enlightenment philosophers, but also to the people who inhabited the American Northeast long before Europeans arrived. The British referred to them as the Five Nations: the Mohawk, Oneida, Onondaga, Cayuga and Seneca. (A sixth tribe, the Tuscarora, joined in the early 18th century.)

Collectively, they call themselves the Haudenosaunee (pronounced hoe-dee-no-SHOW-nee), or “people of the longhouse.” It’s unclear when they banded together under that name, but some of the earliest European accounts attest to the alliance. According to legend, the five tribes had long fought among each other until a man known as the Peacemaker, together with a skilled orator named Hiawatha, persuaded them all to embrace the Great Law of Peace.

The flag of the Iroquois Confederacy. (Credit: Louis.Roth/Shutterstock)

Consisting of 117 rules recorded on strings of wampum beads, the Great Law was designed to help the Haudenosaunee live in harmony. Besides vesting the community with the power to choose its own leaders — a right which, at the time, may have been unique in the world — it even describes the ideal character of those leaders: servants rather than overlords. “Their hearts shall be full of peace and good will,” reads Article 24, “and their minds filled with a yearning for the welfare of the people of the Confederacy.”

The Great Law formed the foundation of a confederacy stable enough to endure for centuries (to the present day, in fact). By late colonial times, the Haudenosaunee were the preeminent power in the region, and there’s some evidence that prominent American revolutionaries were familiar with at least the basics of their government.

In one notable example, Benjamin Franklin printed a 1744 speech by the Onondaga chief Canassatego, in which the latter urged the colonies to follow his people’s path. "We heartily recommend Union and a good Agreement between you our Brethren," he said. "Never disagree, but preserve a strict Friendship for one another, and thereby you, as well as we, will become the stronger.” Franklin himself later wrote (in incredibly racist terms) that “if six Nations of ignorant Savages should be capable of forming a Scheme for such a Union,” surely the colonies could do the same.

Similar sentiments cropped up in later discussions of American independence, during the Albany Plan of Union in 1754 and even at the Constitutional Convention in 1787. Some of James Wilson’s words seem to mirror Canassatego’s advice, and John Adams referenced Native governments in A Defence of the Constitutions of Government of the United States of America, the three-volume survey of political theory he prepared on the eve of the convention.

Some features of Haudenosaunee philosophy survive explicitly in modern, mainstream America. To this day the nation’s Great Seal, displayed on the back of the $1 bill, bears an eagle with a bundle of 13 arrows in its talons. The image was originally a Haudenosaunee metaphor in which each arrow represented one tribe — any one by itself is weak, but together they cannot be broken.

Connections like these have led many to agree that, as Bruce Johansen writes in Forgotten Founders: How the American Indian Helped Shape Democracy, Native peoples “played a key role in the ideological birth of the United States.”

Other facts suggest the influence was more subtle. For one, it’s not clear that the founding fathers had more than a vague grasp of how the Haudenosaunee ran their society. And the style of government outlined in the U.S. Constitution differs from the Great Law in crucial ways — most significantly by rejecting hereditary leadership roles and excluding women from the electoral process.

Temple University anthropologist Elizabeth Tooker, writing around the time of Congress’s resolution, questioned the link it asserts. She doubted whether the Constitutional Convention delegates “would have proposed a system under which only their relatives could become members of Congress, and a system under which each legislator was chosen by a close female relative of the previous holder of the office.”

Obviously they didn’t propose such a system. But some experts argue that if the Haudenosaunee did not inspire the specific structure of American political institutions, they may still have offered abstract guidance. As Charles Mann writes in 1491: New Revelations of the Americas before Columbus, “The framers of the Constitution, like most colonists in what would become the United States, were pervaded by Indian ideals and images of liberty” — even if they didn’t strive to emulate the details of indigenous governance.

No doubt the architects of the U.S. borrowed from European thinkers like John Locke and Montesquieu, as well as political experiments throughout history. But maybe, as Native American scholar Gregory Schaff suggests, “Recognition of American Indian democracies illuminates a broader understanding of America's original democratic heritage.”