An Ancient Ant Army Once Raided Europe 35 Million Years Ago

Ant armies can consume over 500,000 other creatures in a single day. And new research reveals one of the first armies began in Europe. 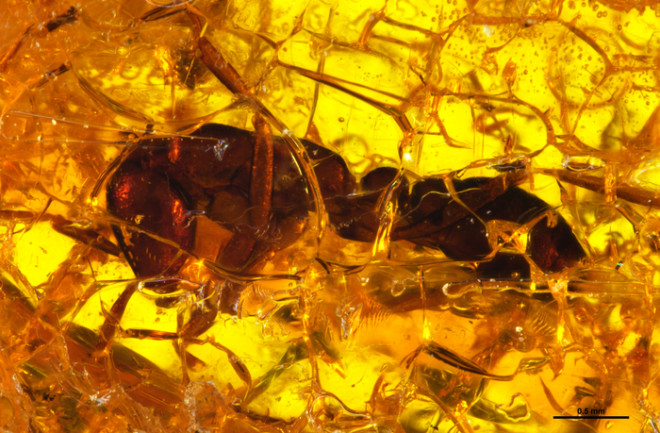 While you may not think of ants when you imagine an army, scientists say that the insects were some of the world’s first soldiers, forming their own forces millions of years ago.

In fact, researchers recently found one of the oldest fossilized specimens of a so-called army ant in a piece of preserved amber from around 35 million years ago, according to a paper published in Biology Letters. More than anything, the specimen suggests that these predatory ants were once much more diverse and widespread than they already are today.

“Army ant workers participate in raiding swarms, hunting other insects and even vertebrates,” says Christine Sosiak, a study author and a student at the New Jersey Institute of Technology, in a press release. This activity sometimes results in the consumption of over 500,000 other creatures in a single day.

A ravenous raiding allowed the Dorylinae, also known as army ants, to spread across several swaths of the planet with striking success. Today, as many as 270 species roam Africa, Asia and Australia, and about 150 species plunder around North and South America. That said, this type of insect, so named thanks to its incessant movements and fierce foraging practices, have avoided Europe throughout their history, or so it has seemed to scientists for years.

Now, the identification of a fossil from the Eocene period has revealed a strange lineage of ancient army ants. This lineage, scientists say, provides the first proof that these predatory insects once raided around Europe, prior to vanishing from the continent sometime in the past 35 million years.

“From everything we know about army ants living today, there’s no hint of such extinct diversity,” says Phillip Barden, a study author and an assistant professor of biology at the New Jersey Institute of Technology, in a press release. “With this fossil now out of obscurity, we’ve gained a rare paleontological porthole into the history of these unique predators.”

Taken from the Baltic region sometime in the 1930s and subsequently added to the collections of the Museum of Comparative Zoology at Harvard University, the specimen in question remained unnoticed for almost a century before researchers identified it as a unique species.

“The museum houses hundreds of drawers full of insect fossils, but I happened to come across a tiny specimen labeled as a common type of ant while gathering data for another project,” says Sosiak in a press release. “Once I put the ant under the microscope, I immediately realized the label was inaccurate. […] This [was] something really different.”

Renaming the specimen with a new designation, Dissimulodorylus perseus, the researchers found that the eyeless species measured about a tenth of an inch in length and lacked the ability to see. Further analysis of its morphological and phylogenetic features revealed that the insect likely lived underground and was a close ancestor of a type of modern army ant from Africa and Asia, known as the Dorylus.

“This worker may have strayed too far from its fellow hunters and into sticky tree resin, which eventually solidified and encased the ant as we see it today,” says Sosiak in a press release.

Ultimately, the researchers say that the species is the second oldest army ant species to be identified, and the first (and only) to be identified in Europe, which was much warmer and wetter 35 million years ago. At the time, the climate was ideal for aggressive, underground ants.

“This was an incredibly lucky find. Because this ant was probably subterranean like most army ants today, it was much less likely to come into contact with tree resin that forms such fossils,” Sosiak says in a press release. “We have a very small window into the history of life on our planet, and unusual fossils such as this provide fresh insight.”

Poised for further investigation in the future, the researchers say that the specimen will remain within the collections of the Museum of Comparative Zoology.