Researchers stumble upon orcas devouring a pygmy sperm whale off the coast of California. This gives researchers a closer look into orca feeding habits. 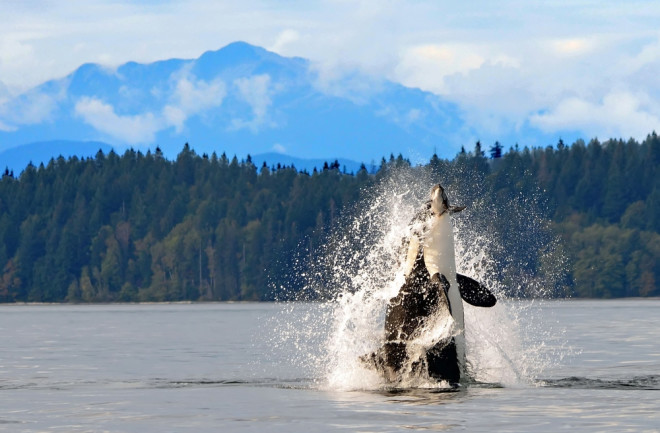 When a research team motored down a predetermined transect line offshore from Monterey, California, they witnessed some commotion — many excited seabirds were hovering over some big splashing. They went to take a closer look, and saw orcas were involved.

“You could see the killer whales making lots of quick movements, both laterally on the water surface, and they were diving,” Paula Olson says, a visiting marine mammal biologist at the National Oceanic and Atmospheric Administration (NOAA). In the midst of this, their prey would sometimes breach the surface before the orcas would slam it down under the water.

Within a few moments, Olson and her colleagues saw a lot of gore, as if the killer whales had opened an artery. “It was gruesome, but there was this geyser of blood that shot way high in the air,” Olson says, adding that it shot nearly 30 feet up. “[The orcas] munched some part of the animal where blood just happened to be coursing through.”

As the team got closer, they saw that orcas and albatrosses were feeding on pieces of floating tissue in the water. While the researchers were there to conduct distribution surveys of whales, dolphins and porpoises, they also managed pick up lungs and the heart floating nearby. They put the organs on ice to identify the victim’s species back at the lab, which was a pygmy sperm whale.

A Difficult Whale to Find

As reported in research published recently in Marine Mammal Science, genetic analysis later confirmed that the species was a pygmy sperm whale, a cetacean smaller than orcas and much smaller than sperm whales. This species is found widely in the world’s oceans, usually in temperate or cooler waters, but not much is known about their habits.

“The rarity of sightings likely reflects the cryptic nature of this species (they are detected almost exclusively in extremely calm sea conditions), rather than an absence of animals in the region,” reads a 2016 NOAA report on their population size. The report estimated just 4,000 animals were in the waters off California, Oregon and Washington state. Since the animals are so rarely witnessed, it’s unclear whether they are decreasing or increasing, the report states.

But DNA from the heart and lung confirmed the species was a pygmy, meaning this was the first recorded example of orca predation on this species in the North Pacific, Olson says.

Which Pod was Responsible?

During the event, the researchers observed two adult males with tall dorsal fins and two whales with shorter dorsal fins that could have been females, or younger males whose fins hadn’t yet matured.

They dropped a floating hydrophone into the water as they approached the whales — the researchers believed the orcas had made their kill just as the vessel had first witnessed the attack. The device picked up the whale sounds, and the researchers could compare them to other recordings. This would help determine which pod might have been involved in the predation. The researchers also snapped some photos so they could later compare the whales to other photos stored in the database.

Killer whale societies are complex — several different pods operate up and down the Pacific Coast. Many of them have feeding strategies unique to their ecotype, while others are more generalists, feeding on whatever prey they can get ahold of. Some stay put in a relatively small area while others are more nomadic, ranging up and down the Pacific Coast of the Americas. Some ecotypes are better known to researchers than others — those offshore from the Pacific Northwest and British Columbia, Canada, for example.

The orcas from the attack looked different from the well-known whales off the coast of California. They had more narrow saddle patches — the white pigmentation that many orcas have right around the base of their dorsal fins. Narrow saddle patches are typically more common among orcas found in tropical waters. All four orcas also had evidence of fresh bites from cookiecutter sharks, a species which also typically occurs more in warmer water and takes bites out of whales and dolphins, says Olson.

None of the photos matched any orcas recorded in regional catalogues from the Northeast Pacific. Similarly, the sounds didn’t match any known group. But they did sound a little more like the offshore ecotype of orcas that range more widely than many ecotypes found closer to the U.S. Pacific Coast.

Researchers still don’t know much about these killer whales and what they were doing in California waters, or even if they sometimes come here regularly. It’s possible that they specialize in this type of prey, but Olson says her best guess is that these orcas are generalists, eating whatever they come across in these deep waters.

“It’s still a bit of a mystery,” Olson says.

There was also an observed attack in Hawaii on a dwarf sperm whale recently, Olson says, and observations like these can help researchers understand more about whales in the Pacific.

Here's Why Dolphins Have to Shout Underwater