For better or for worse, scientists say it’s human nature to partake in unhealthy activities. 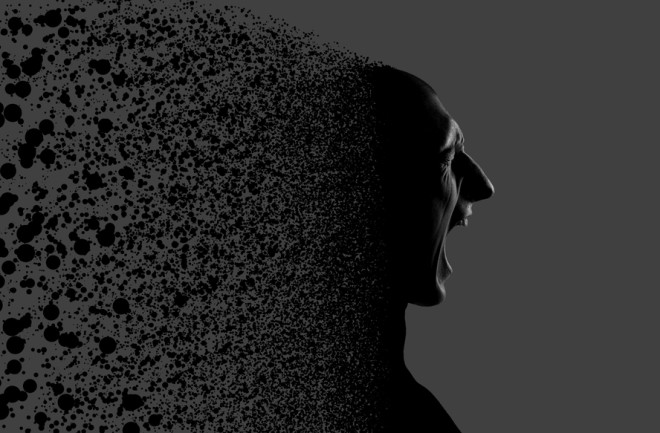 Humans seem to have an appetite for self-destruction. Whether it’s maxing out our credit cards, binge drinking and smoking or knowingly entering toxic relationships, our inherent need for chaos is seemingly never-ending. Self-destructive behaviors are characterized as activities that put us in harm's way, either physically or mentally. It’s important to note that these behaviors aren’t always intentional or planned and can be impulsive, or the result of factors beyond our control.

So what causes us to place ourselves at risk like this? There are many scientific explanations as to why humans have a knack for self-destructive behaviors. One possible answer may date back to childhood: researchers have found that early trauma and inadequate parental care can cause individuals to engage in self-destruction as a coping mechanism. Mental health challenges, life-changing events or uncontrollable stress can also lead to reckless behavior.

Even Sigmund Freud believed that all humans have a death wish. His death drive theory posits that humans have an unconscious desire to die that can manifest outwardly in the form of aggression, violence or even self-harm. Like many of Frued's ideas, the controversial theory has been criticized by scientists today, but the father of psychology may have been onto something about an inherent human craving for destruction.

Here are 10 self-destructive behaviors that most of us have flirted with at least once (if not a few times) in our lives:

A Thirst for Violence

It’s not surprising that humans are drawn to it. Whether it's in movies, books, or on the internet, it seems that everywhere we look, violence dominates our lives. Research has shown that violence isn’t just about the negative emotions, such as anger, that might drive it. Apparently, our brain processes aggressive behaviors like violence in a similar manner to the way it processes rewards, meaning it’s also human nature to pick fights in order to satisfy a craving.

Binge drinking, smoking, drugs — these may be some of the most common ways that humans self-destruct. What's more, individuals abusing substances often face a reduced ability to control their impulses towards alcohol or drugs. This can leads to an uphill battle with addiction, where the brain's normal hardwiring starts to fail.

Cutting contact with toxic individuals — whether it’s a friend, family member or even a romantic relationship — is no easy feat. Oftentimes, denial can be a large part of why someone might stay in an unhealthy relationship. Our denial acts as a coping mechanism, and therefore prevents us from seeing that we may be putting ourselves in a harmful environment.

It's no secret that getting bullied can leave individuals with severe mental and emotional trauma. Still, 1 out of 5 students report getting bullied every year. And it often doesn’t get better when we grow up. Researchers have found that nearly 30 percent of employees endured bullying in the workplace in the form of aggressive co-workers or bosses. But what drives us to ridicule others? Psychologists have suggested that the act of bullying reflects serious problems in those who commit it, such as an individual's own insecurities and a need for control.

There’s no doubt that stress can negatively impact your physical and mental wellbeing. Even with that knowledge, though, there’s no escaping it. We’ve all stressed out about the big things — careers, family, finances — and sometimes even the little things, like running late to a meeting. But consistently activating your stress hormones can have serious health risks that start to deteriorate the quality of your life over time. Researchers have found that chronic stress can even contribute to things like high blood pressure and heart disease.

Can't stop doomscrolling before bed? We’ve all been there, but it’s important to recognize that not making time for sleep can be harmful to our health. In fact, getting anything less than 7 hours of sleep per night can have a lasting impact on many areas of your brain, including attention and concentration, reaction time, memory and decision-making. The easiest way to quit this habit is by simply making time for rest and practicing good sleep hygiene.

Lying Through Our Teeth

If there’s one thing you're probably done on this list, it’s this right here. The reason behind why humans lie so much has remained a mystery to psychologists. Did you know that it takes about 30 percent longer to lie than to tell the truth? Over the years, researchers have theorized that dishonesty is a part of what makes us human. Often, it’s due to selfish interests like promoting or protecting ourselves or even covering up our mistakes. Regardless, it seems to be inescapable to live without lying.

A Desire to Cheat

Cheating, a controversial and complicated behavior, may actually have a rather simple explanation: Research has shown that humans are drawn to activities that make them feel pleasure. While each situation is unique, cheating may largely be a result of our innate human desire to feel pleasure, particularly if we're failing to receive it in our current relationships. Still, that explanation might not always cut it — a 2021 study revealed eight key reasons that people cheat, including anger, self-esteem and a need for variety.

An Inability to Stop Gambling

Gambling, like many of the behaviors on this list, seems to be a hardwired into human nature. Perhaps we can blame it on our innate desire to seek out rewards. It’s no wonder that nearly 80 percent of American adults gamble at least once in their lifetime. The science behind gambling has revealed that dopamine, a neurotransmitter focused on pleasure, is often released when the reward of a particular bet is uncertain. Therefore, the uncertainty of gambling encourages risk-taking behavior and can be highly addictive.

As naturally social creatures, humans crave new information, and gossip is often the way that we get it. A little gossip session can seem like no big deal… and it may not be if it's channeled in the right way. Both good gossip and bad gossip exist. While good gossip involves spreading or exchanging information in a responsible manner, bad gossip —spreading lies and sharing inaccurate information about others to get ahead or inflict pain — does the opposite, and can be harmful to others, as well as self-destructive. Still, if you find yourself spilling some (hopefully harmless) tea with your coworkers, you shouldn't feel too bad — scientists have found that the brain might actually be wired to respond to gossip.

Gut Bacteria's Role in Anxiety and Depression: It’s Not Just In Your Head

More From Discover
Mind
Calming Kids With Electronics May Affect Emotion Regulation Skills
Mind
How Failing Could Actually Help us Succeed
Mind
Can Playing Video Games Make You Smarter?
Health
Why Do Some People Live So Long?
Mind
What Is Emotional Blunting, and Do Antidepressants Cause It?
Technology
AI and the Human Brain: How Similar Are They?
Recommendations From Our Store
My Science ShopDiscover STEM Kits
My Science ShopDiscover 2022 Calendar
My Science ShopStrange Science
My Science ShopElements Flashcards
Shop Now
Stay Curious
Join
Our List