What Does Kratom do? Full Breakdown and Complete Guide 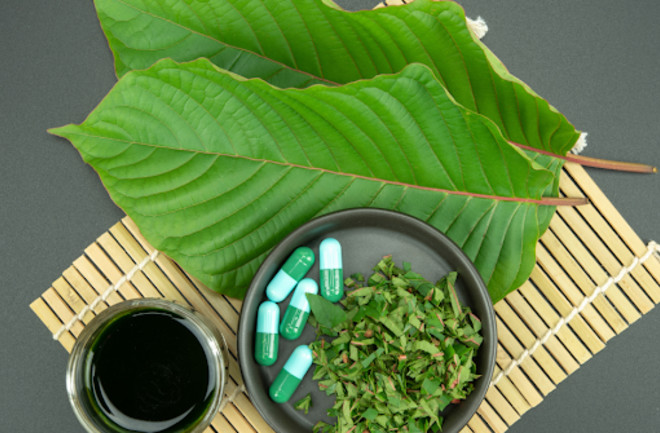 What does kratom do? If you're asking this question, you're not alone. Kratom is a unique plant that has many potential benefits and uses. In this article, we will provide a full breakdown of what kratom is, what it can do for you, and how to use it safely and effectively. We will also provide a comprehensive guide on this supplement that's gaining popularity. So if you're interested in learning more about this amazing plant, keep reading!

Kratom is an herbal extract made from the leaves of the evergreen tree Mitragyna speciosa, which grows in Southeast Asia. Kratom leaves can be chewed or dried and swallowed, brewed, or used to make a liquid product. Liquid kratom is often marketed as a treatment for muscle pain, or to suppress appetite and stop cramps and diarrhea. Kratom may also be sold as a treatment for panic attacks.

Kratom is said to interact with opioid receptors. Kratom operates as a stimulant in low doses and makes people feel more energetic. It reduces pain and induces euphoria at higher doses. At very high dosages, it functions as a sedative, making users quiet and perhaps drowsy. Some practitioners of Asian traditional medicine believe that kratom is a reasonable and safer alternative to opium.

What exactly is kratom used for?

Kratom is most commonly found in liquid form and advertised as a cure for muscle pain, or to suppress appetite and stop cramps/diarrhea. Kratom is also sold as treatments for panic attacks and act on opioid receptors. At lower doses, kratom mainly acts as a stimulant that gives users more energy.

How long has kratom been used for?

Kratom leaf has been chewed for at least 150 years in Southeast Asia for its stimulant effects to help with difficult day labor. If brewed into a tea, it can have relaxing and pain relieving properties.

What are the benefits of taking kratom?

The potential benefits of kratom include:

Some people also believe that kratom can be used to treat conditions like anxiety, depression, and even addiction. However, there is no scientific evidence to support these claims.

What are the positive effects of kratom?

Kratom has several mood-improvement properties. Kratom is reported to be a successful therapy for opioid addiction. It's been shown to aid in the relief of morphine and ethanol withdrawal symptoms. Other studies have shown that kratom has the potential as an antidepressant and a hunger suppressant. Kratom may also have cognitive-enhancing effects.

There is no definitive answer to this question. Kratom is not currently regulated in the United States. Some people report experiencing negative side effects when taking kratom, including:

Because kratom is not regulated, it is important to purchase this supplement from a reputable source. Be sure to do your research to find a reputable vendor before you buy kratom.

How do I take kratom?

There are several ways to take kratom. The most common method is to chew the leaves, which can be done fresh or dried. Kratom can also be brewed into a tea or taken in capsule form. It is important to start with a low dose when you are first trying kratom and to increase the dose gradually to avoid negative side effects.

What is kratom active ingredient?

The leaves of the kratom plant contain two major psychoactive ingredients, mitragynine and 7-hydroxymytragynine. These leaves are crushed and then smoked, brewed as tea, or placed into gel capsules. Kratom has a long history of use in Southeast Asia, where it is commonly referred to as thang, kakuam, thom, ketum or biak.

How long does kratom last?

After kratom is ingested, its effects can be felt in 5-10 minutes and will last anywhere from 2-5 hours. It should be noted that the intensity of these effects will depend on how much was consumed.

Kratom overdoses are possible, as with any pain medication or recreational drug, but it is very difficult to know what levels of kratom usage constitute an overdose in people.

What are some of the health benefits of kratom?

While there is always room for more research to be conducted, as of now, studies have shown that kratom has many benefits. These benefits include:

Several clinical studies have been conducted to research the potential of kratom as a sexual enhancement supplement. The findings presented conclude that kratom is an effective natural aphrodisiac.

Kratom, although targeting opioid receptors similar to morphine and codeine, is considered an atypical opioid due to its selective inactivation of certain signals. This difference may be the explanation for kratom's more tolerable side effects when compared to typical opioids.

Kratom has a variety of mood-altering qualities. It's been shown that kratom is effective in treating opioid addiction. It has been proved to assist with morphine and alcohol withdrawal symptoms.

In a study done with rats, kratom administration reduced hunger by impairing the hypothalamus, which is responsible for appetite and cravings. More research on humans is needed to determine whether kratom has similar effects.

In addition to taking kratom orally, you can also apply it topically in the form of skin products. Alkaloids found in this plant help reduce the appearance of wrinkles and age spots. By using a kratom-based moisturizer, you'll notice an improvement in your black spots over time.

Other benefits of using kratom topically include reducing acne and eczema. This herb can also help with psoriasis, a chronic skin condition that causes red, scaly patches. When applied directly to the affected area, kratom can help soothe the irritation and itchiness associated with this condition.

Kratom is also effective in treating wounds and burns. When applied to the skin, it can speed up the healing process by stimulating cell regeneration. In addition, kratom has antibacterial and antifungal properties, which can protect the wound from infection.

What is kratom tea?

Kratom tea is an herbal infusion made from the leaves of the kratom tree. The leaves are typically dried and ground up, then brewed in hot water to make a bitter-tasting tea. Kratom tea has been used for centuries by people in Southeast Asia for its stimulant effects.

Today, kratom tea is becoming increasingly popular in the West as a way to boost energy and promote wellness. Some people also use it as a natural remedy for pain, anxiety, and depression.

Brewing kratom tea is relatively simple. The leaves can be purchased online or at some health food stores. Once you have the leaves, all you need to do is steep them in hot water for 5-10 minutes.

Kratom tea can have different effects depending on the dosage. At lower doses, it acts as a stimulant, providing an energy boost and increased focus. At higher doses, kratom tea can produce sedative effects, helping to promote relaxation and sleep.

To avoid any negative side effects, it's important to start with a low dose and increase gradually as needed. If you experience any adverse effects, stop taking kratom tea and consult your healthcare provider.

Where can you buy kratom?

Today, kratom is sold online and in many health food stores across the world. It can be purchased in the form of capsules, powders, and extracts. If you're considering taking kratom, it's important to do your research and purchase from a reputable source. Look for a vendor that offers a money-back guarantee and lab-tested products to ensure you're getting a high-quality product.

When buying kratom online, be sure to read the reviews before making a purchase. This will help you find a reliable vendor that offers quality products and excellent customer service.

Kratom is legal in most parts of the world, but there are some exceptions. Before purchasing kratom, check your local laws to ensure it's legal in your area.

Where is kratom metabolized?

Scientists think that kratom is metabolized by the liver and changed into 7-OH-mitragynine, which is then broken down even further by other enzymes. Some experts believe that 7-OH-mitragynine is what causes many of kratom's known effects.

Kratom's exact mechanism of action is still unknown. However, scientists believe that it binds to certain receptors in the brain, which leads to its stimulant and sedative effects.

Kratom is thought to be relatively safe when used in moderation. However, there have been reports of adverse effects, including liver damage, seizures, and death. If you're considering taking kratom, it's important to speak with your healthcare provider first. They can help you understand the potential risks and benefits of this herb.

How long does kratom stay in your system?

The effects of kratom typically last 5-6 hours. However, the length of time that kratom stays in your system depends on several factors, including your age, weight, and metabolism.

Kratom is thought to be largely eliminated from the body within 24 hours. However, its metabolites may remain in the body for up to 2 weeks. This means that kratom could potentially show up on a drug test even after you've stopped taking it.

If you're taking kratom for medicinal purposes, it's important to speak with your healthcare provider before stopping or starting any new medications. They can help you manage any potential withdrawal symptoms and monitor your overall health.

Dopamine is a neurotransmitter that plays an important role in the brain's reward system. It's involved in the process of reinforcement, which helps us learn new behaviors.

Kratom has affinity for both opioid and serotonin and dopamine receptors, suggesting that it may be used to treat depression, anxiety, and madness. Kratom does not seem to increase dopamine levels in the brain, but it does seem to produce effects similar to those of dopamine agonists.

Can you take kratom and antidepressants together?

Kratom is a potent P450 3A4 and 2D6 inhibitor, so it has the potential to cause drug interactions with opioid painkillers, antidepressants, and tranquilizers. If you're taking any medications, it's important to speak with your healthcare provider before taking kratom. They can help you manage any potential drug interactions.

Kratom may also potentiate the effects of alcohol and other sedatives. It's important to avoid drinking alcohol or taking other sedatives while taking kratom. Doing so could increase your risk of developing dangerous side effects.

In general, it's best to avoid taking kratom with any other substances, especially if you're not sure how they will interact.

What is the best way to use kratom?

There are many ways to use kratom, and each person may have their own favorite method. Some people like to brew kratom tea, while others prefer to take it in capsules or simply chew on the leaves.

The best way to use kratom will depend on your personal preferences and goals. If you are looking for pain relief, for example, you may want to take kratom in a way that will allow the active compounds to be quickly absorbed into your bloodstream.

On the other hand, if you are looking for a more energizing effect, you may want to take kratom in a way that allows it to be released more slowly into your system.

In conclusion, kratom is a plant with many benefits that has been used in traditional medicine for centuries. Although more research is needed to determine all of the potential health benefits of kratom, the available evidence suggests that it can be an effective treatment for pain, mood disorders, and sexual dysfunction.