The Long-Term Effects of Alcohol on Sleep Quality

While a night cap might help you fall asleep, there's no guarantee you’ll wake up the next morning feeling well-rested. 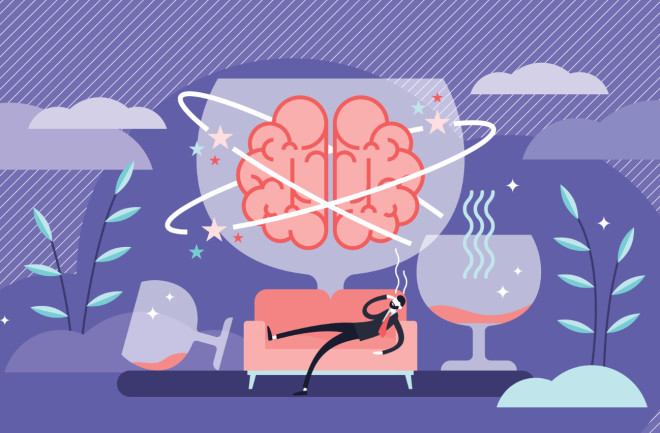 Many of us are familiar with the experience that is waking up with a particularly bad hangover, the result of too many sugary mixed drinks at a college party or perhaps too many spiked eggnogs at an office holiday party. Hangovers notoriously leave us with headaches, stomach pains, nausea, fatigue, irritability and anxiety; for many, this also means spending the day slumped on a couch with intermittent naps and comfort foods and sports drinks in hand. While hangovers are the most glaringly obvious residual effect of alcohol overindulgence, however, they aren’t the only one.

What would happen, for example, if you consumed large amounts of alcohol several days in a row? Compounded over a span of decades, and as your tolerance builds, what might be the long-term effects of this constant, heavy alcohol consumption? To some, these may sound like purely rhetorical considerations — but let’s not kid ourselves. There are certainly people for whom a few drinks a day is the norm, and they are not necessarily the stereotypical alcoholics we often see portrayed in media.

In fact, data from the American Addiction Centers explores how work-related stress could impact a person’s desire to use drugs and alcohol as a coping mechanism: Of the 14.8 million Americans who take illegal substances, 70 percent are minimum-wage, part-time employees. In another analysis, the centers cite a 2008 study that states 15 percent of hospitality employees had a problem related to alcohol and quote a New York Times piece in which a writer describes the “physical exhaustion and emotional stress" of restaurant work as being a major contributor to substance abuse.

Read More: Why Do Humans Have a Taste For Alcohol?

Spoiler alert: These workers are also not getting high-quality sleep. Numerous studies have explored the relationship between alcohol and sleep, but the general consensus is that while alcohol may help the onset of sleep — temporarily making us feel tired and relaxed — it actually disrupts our sleep in the latter half of the night by causing us to wake up earlier than usual. And in the early stages of sleep, alcohol severely suppresses the amount of REM sleep we get. REM sleep is the stage in which our bodies process emotions and memories; when we get less of it, our emotions, ability to focus and overall mental well-being lessen.

The data shows that those working stressful jobs with long hours and low pay tend to use alcohol and other substances as a coping mechanism. This is a massive issue on its own but is especially problematic when the habit becomes cyclical.

Hospitality workers infamously work long hours for either low pay or pay that is dependent on the goodwill of customers — a bartender relying on tips, for example, or a retail employee barely able to afford their bills. Perhaps these workers have a drink or two after their shift to unwind (for restaurant employees, there is especially easy access) and head home to sleep before getting up the next day to do it all over again.

A study published earlier this year in the European Journal of Integrative Medicine explored the relationship between fatigue and sleep disturbances, concluding that patients who complain of fatigue should have sleep disturbances like alcohol consumption considered. Research from 2012 also found a direct relationship between work-related stress, fatigue levels and insomnia. In short, people who experienced high amounts of stress at work tended to feel more fatigued after a shift while also experiencing higher levels of insomnia, which could offer an explanation as to why many people use alcohol as a sedative.

Unfortunately, this is a double-edged sword. A different study from 2020 tracked alcohol consumption among 1,920 men and women over the course of three decades and found that “those with persistent alcohol dependence had higher odds of insomnia than those without alcohol dependence […] Our finding that those who have trouble falling asleep were more likely to be persistent heavy drinking suggests that they may be using alcohol as a sedative.”

It’s easy enough to say that we should stop using alcohol as a sleep aid, or that we should consider cutting back on our drinking. One could argue that the populace is already aware of these facts and the overarching dangers of alcohol consumption. But individual responsibility in this matter also draws parallels to the idea of reducing one’s “carbon footprint” — an idea perpetuated by big oil companies to pass blame onto the consumer rather than the corporation.

When the issue of alcohol consumption among minimum-wage workers and restaurant employees is as widespread as it is, it raises questions about underlying issues: Namely, are these workers incapable of monitoring themselves responsibly? Or are they regularly mistreated, underpaid and undervalued, forcing them to turn to methods of self-medication in order to cope with the anxiety, fatigue and insomnia they deal with on a daily basis?

10 Science-Backed Ways to Boost Your Brain

Calorie-Restricted Diets May Not Live Up to the Hype